Aleksib on OG move, ENCE’s struggles, and building a roster with NBK

Aleksi ‘Aleksib’ Virolainen had an incredible season. The Finnish in-game leader helped ENCE to heights that few thought they were capable of before being unceremoniously, and unexpectedly, benched. It was one of the most controversial moments of 2019 for CS:GO.

Now part of the all-new OG Counter-Strike project, he has told Dexerto how he reacted to being cast aside by ENCE and what he thinks of his new team.

To understand how big a shock it was for Aleksib to be dropped by ENCE, and exactly what he’s bringing to the table in OG, we need to look back at his rise and just how pivotal he was to his team’s success.

For most of CS:GO’s history, the idea of an all-Finnish roster competing at an elite level would have been almost laughable, so when ENCE pulled off a stunning second-place at the IEM Katowice Major, many assumed it would be an outlier, and the Finns would quickly fade out of Counter-Strike’s top tier. Instead, they went on to establish themselves as a legitimate top-three team, regularly contending with the likes of Team Liquid and Astralis.

At the center of it all was the team’s dynamic 22-year-old IGL, Aleksib. ENCE weren’t close to the most skilled roster at the majority of the events they attended, but their strong fundamentals and understanding of the game was second only to Astralis, and the plaudits soon came flooding in for Virolainen’s tactics and ability to structure a team that was more than the sum of its parts.

Despite a few blips, most notably a bitterly disappointing top-16 at ESL One Cologne in 2019, the general consensus heading into the second half of the year was that ENCE were still a team performing above their pay grade. That’s why it came as such a surprise when it was announced that Aleksib was to be cut from the team after the StarLadder Berlin Major – an announcement that was made immediately before the tournament got underway.

Most players would have crumbled at the news, but not Aleksib.

When asked how being cast aside affected him, Aleksib replied: “Not too much to be honest. I wanted to play as good as I could for the team one more time.”

And perform he did. It is still uncertain how much of the tactical responsibility was shared between him and Aleksi ‘allu’ Jalli in Berlin, but whatever the arrangement, they surprised everyone with a stunning 3-0 performance in the group stage, defeating AVANGAR, MIBR, and Vitality in the process.

Aleksib’s maturity shone through during his last tournament with the team. A consummate professional to the end, he shouldered the same responsibilities that he always had, dealing with post-match interviews and refusing to throw his teammates or org under the bus.

Aleksib played the StarLadder Berlin Major with ENCE already knowing he would be cut from the team.

Unfortunately, the team’s miracle run ended in the first round of the playoffs with a 2-0 loss to Renegades, meaning the Counter-Strike community was robbed of seeing one last deep run from Aleksib’s  well-oiled ENCE lineup. Their tournament was over and Aleksib’s time with the organization was also finished.

“I’m happy we reached the Legend status with a clean 3-0 result,” he told us. “Unfortunately we lost the first game on the stage to ex-Renegades, but I’m still happy with how it ended.”

That was in September, and despite not playing a single official match since, Aleksib has remained a name on the lips of everyone in the CS:GO community. Shortly after being benched by ENCE, it became apparent that the Finn was one of the hottest properties around, and in October Richard Lewis revealed that Complexity had offered the star an eye-watering two-year deal worth $1 million.

Aleksib didn’t take the offer. Instead, rumors began to circulate that he was linking up with another player that had been unceremoniously ousted from a top team, Nathan ‘NBK-’ Schmitt. The 25-year-old Frenchman, who was removed from Vitality in September, is one of the most experienced and decorated pros in all of Counter-Strike and seemed keen to build an international roster.

After some speculation about a move to 100 Thieves, reports began to surface in October that claimed Aleksib and NBK- were in talks with an organization that had never before fielded a Counter-Strike roster. If those reports were to be believed, the back-to-back champions of Dota 2’s The International, OG, were about to enter CS:GO with a powerful new roster.

“We had talks with multiple people,” Aleksib told us. “But we knew we are going to end up in OG a few weeks before signing.”

The exact lineup of the roster was a point of speculation and debate but two things seemed certain: Aleksib and NBK would be donning OG jerseys before the year came to a close and North’s Valdemar ‘valde’ Bjørn Vangså, a respected Danish player with an underrated amount of firepower, would be joining them.

Finally, on December 4, the official announcement was made. OG confirmed their CS:GO entrance and revealed their full starting lineup of Aleksib, NBK, valde, Issa ‘ISSAA’ Murad and the relatively unknown Mateusz ‘mantuu’ Wilczewski.

It took a while, but Aleksib can’t wait to get started with OG in an official capacity. “It feels great, like a burden off your shoulders because It took longer than expected and there were other things happening as well. OG is filled with great people and I’m happy to work with them.”

When asked about his input into building the OG CS:GO roster, Aleksib made it clear that this isn’t a team of random individuals, but one where every part has been scrutinized and picked for a reason: “[We had] a lot of input obviously,” he said. “We put a lot of thought on the mental aspect as well when thinking of players with NBK.

“We started practicing a few weeks ago, one of them being the bootcamp we are having right now.”

Emphasis has been placed on the fact that this will be NBK’s first international lineup in a career that has spanned two versions of Counter-Strike and around a decade of professional play, and on Aleksib moving from an all-Finnish team to one with players from five different countries, but he’s quick to remind us that only ISSAA actually has any experience in a situation like this.

“It’s something new for valde and mantuu also,” he says. “ISSAA is the only one with experience in international lineups. I’m looking forward to watching us grow and work towards the goals we set for ourselves. We will try our best to overcome all bumps along the way.”

NBK and Aleksib were quick to join forces after both found themselves teamless following the StarLadder Berlin Major.

ISSAA, who spent two years with HellRaisers under the tutelage of Kirill ‘ANGE1’ Karasiow, is a talented player from Jordan. During his time with the multi-national team, he showed glimpses of his potential and was named HLTV’s MVP of DreamHack Open Tours 2018.

The most unproven player on the team is mantuu. The Polish player spent the majority of 2019 with ALTERNATE aTTaX and has never competed in a top tier international event, but Aleksib is confident that he has what it takes.

“Mantuu is definitely a guy to keep an eye on because he will be the new guy on the block,” he said.

Returning to his in-game leadership role, Aleksib will have the experience of two-time Major winner NBK and former North IGL valde to draw upon while designing and leading an entirely different team to any that he has played for in the past, but Counter-Strike is ever-evolving and the scene is almost unrecognizable to the one he flourished in with ENCE in the first half of 2019.

After dominating the summer months, Team Liquid failed to win the StarLadder Berlin Major that they were heavily favored for and have appeared to be going through an identity crisis ever since. Despite this, the eye test suggests they’re still a top five team in the world.

The kings of 2018, Astralis, had a quieter 2019 in most people’s books. Of course, by Astralis’ standards that means they still won both of the 2019 Majors, bringing their total to four, and have reclaimed their status as the world’s best team with wins at IEM Beijing and ECS Season 8, second at ESL One New York, and 3rd – 4th at DreamHack Masters Malmö 2019 and the ESL Pro League Season 10 Finals.

Evil Geniuses, Mousesports, and Fnatic have all taken victories at premier international tournaments, FaZe Clan won BLAST Pro Series Copenhagen, and Natus Vincere, G2, and Vitality all look like they could catch fire at any moment. The Counter-Strike scene is arguably the most competitive it has ever been, and OG will have a mountain to climb if they want to become a top five team.

“The top is filled with great teams at the moment,” Aleksib said when asked about the current competition. “We will see who has it in them to hold their status and who will drop off eventually. We have started everything from scratch in OG and are taking one step at a time to become a better team. [I’m] Looking forward to get back to playing tournaments and learn new things along the way.” 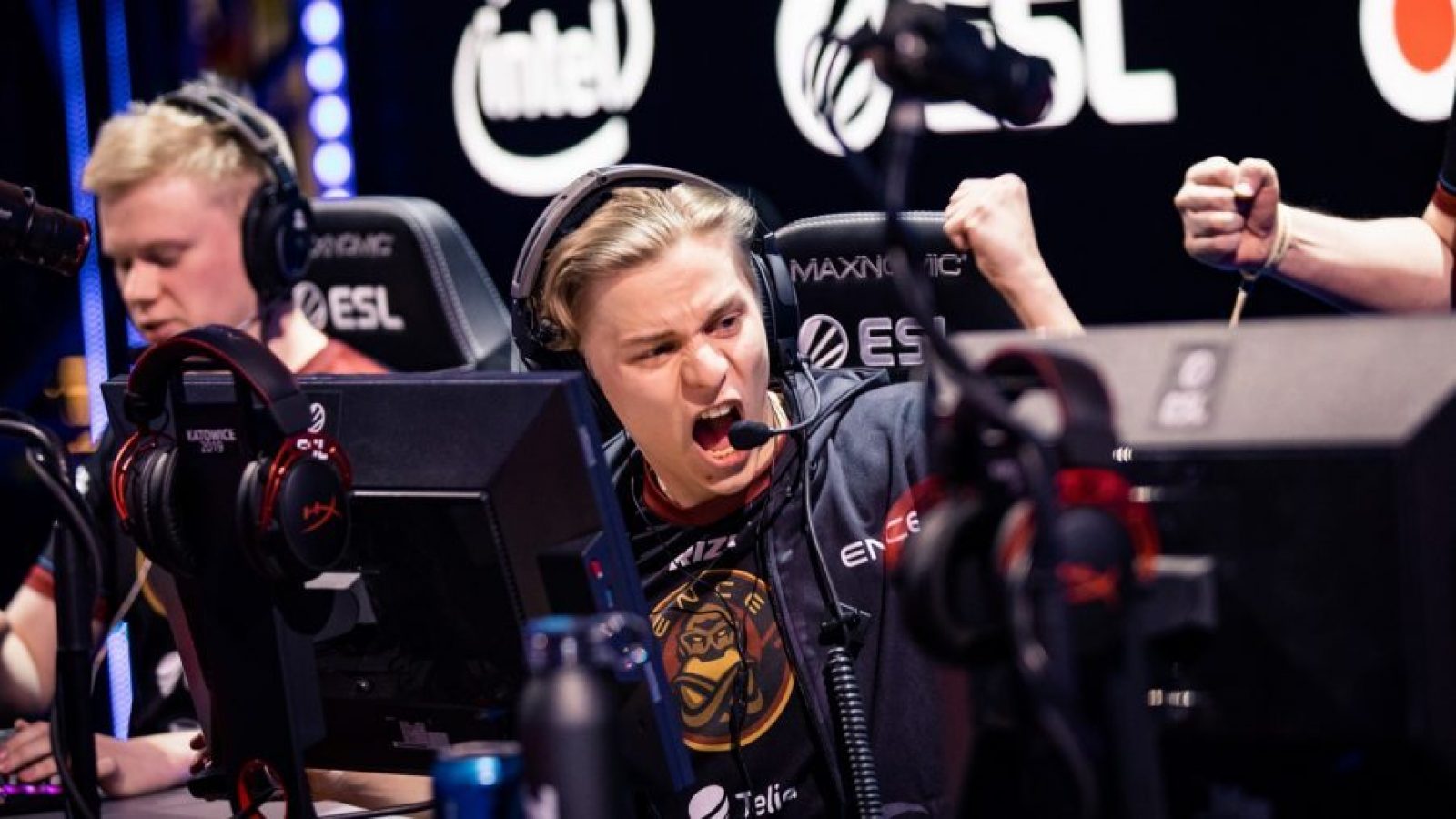 Since his departure from ENCE, the Finnish team has struggled to find its groove. However, after a number of early exits at big tournaments, they did manage to secure a second-place finish at the 2019 CS:GO Asia Championships.

While most pundits and fans have berated ENCE for their decision to cut Aleksib, the man himself remains magnanimous and believes that his former teammates shouldn’t be judged too soon.

“The first couple tournaments shouldn’t count for too much since they barely practiced,” he said. “We will see what they are capable of doing with time.”

Aleksib’s time with ENCE saw him rise to prominence and become recognized as an elite in-game leader who could get the best from his players. However, his task at OG will be the true test of his ability to work with a diverse group of players in an all-new environment.

2020 will be the young Finn’s chance to show the world that he’s here to stay, that he truly is one of the best in-game leaders in Counter-Strike, that all the praise from analysts and pundits is warranted, and that OG aren’t simply here to take part.