What are all the multiplayer game modes in Call of Duty: Black Ops 4? - Dexerto
Call of Duty

What are all the multiplayer game modes in Call of Duty: Black Ops 4?

With Call of Duty: Black Ops 4 set to release worldwide on Friday, October 12, fans have been clamoring for information on what game modes would be available when the game releases.

While fans had been made aware of new game modes like Control, there were still some questions about how many we would actually have when the game released.

Thankfully, there are 13 game modes available to play on release; eight in Black Ops 4’s core playlist, and five featured in the game’s Hardcore playlist.

In the core playlist, fan favourite modes like Hardpoint and Team Deathmatch remain as staples of the Call of Duty franchise, joined by two new modes for Black Ops 4, Heist and Control. The full list of Core game modes are:

In Hardcore, they are currently five game modes for players to try out, as classic core game modes become extremely unforgiving, with limited health and no HUD to help players navigate their way around the map. Game modes featured in the Hardcore playlist are: 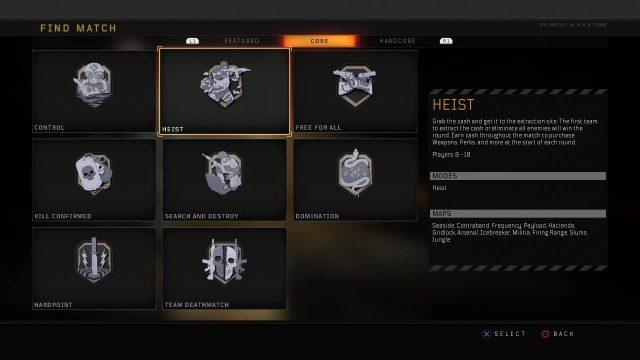 Noticeable by their absence are party games like One in the Chamber or Gun Game, which have made an appearance in previous Call of Duty titles. While these modes aren’t in the game at launch, it’s possible they will could make an appearance later in the game’s lifespan.

Call of Duty: Black Ops 4 releases worldwide at midnight on Friday, October 12, and with 13 game modes available to play, fans of the franchise will have plenty to sink their teeth into.