Armor has been a major point of contention since players got a chance to try out the Private Beta, which went live on September 10.

According to his tweets, the changes will be tested out on September 12 in the hope that they can be implemented into the private beta come September 13.

One of my favorite things about working on Black Out is that not everything has to be nerfed or buffed purely on its stats.

We have an entirely new tool (Item drop rarity) and it’s super important for us to be methodical about this stuff.

TL;DR – Armor is getting nerfed. Those changes will be tested tomorrow for *potential* release on Thursday morning. 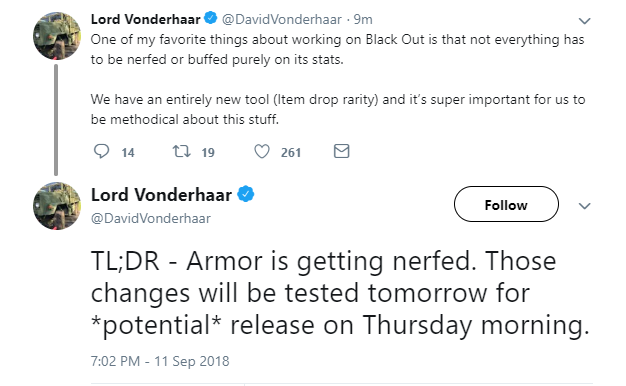 The way Armor currently works in Blackout is that there are three levels of it that can be picked up, with each level offering an increased amount of protection to a player, in addition to their original health.

Many have complained that the third level of Armor is currently too strong and over-powered, and that it is also too readily available on the map for players to find.

While it is not yet clear in what way will Treyarch look to nerf Armor, it appears that Vonderhaar is hinting at some sort of item drop adjustment to one or more levels of the Armor, which would presumably make it less commonly found.

Vonderhaar has said that more information about these changes will be available in a proper blog post to be released on September 12.

All in all, Treyarch are delivering on their promise to look at and prioritize community feedback, and use it to implement changes and adjustments into the game in order to ensure that the final experience is fresh, fun, and balanced.