Call of Duty League’s Minnesota ROKKR hosted their second ROKKR Royale, the first massive Warzone tournament in Season 6, that featured many of the top streamers and pro players battling it out for a share of a $100,000 prize pool. We’ve got everything you need to catch up on the action.

There has been plenty of competitive action so far on Warzone, as many of the top content creators have turned to Call of Duty’s battle royale, taking part in the different tournaments that have been hosted in recent months.

CDL team Minnesota ROKKR hosted the first the “ROKKR Royale” back in April, and have since brought it back with an increased prize pool and even more top streamers and Call of Duty pro players.

Now that Season 6 is live in Warzone, along with the brand new subway system and all the other changes, it was the perfect time to see who from the battle royale’s elite could be the first to dominate.

Minnesota Rokkr hosted a massive Warzone tournament with many of the top CoD stars.

After a delay to the event due to the shaky launch of Season 6, the ROKKR Royale event properly got underway on September 30. Stacked Trios took to Verdansk for a few hours to determine who would make it through to the final four. Throughout the initial portion, only the best four games for each team was taken into consideration. As a result, those that were able to chase down eliminations and secure some wins were given a sizeable lead.

A handful of veteran players and prominent Warzone tournament winners bowed out early in this event. From Chicago Huntsmen’s Formal to Tfue’s squad and plenty others. Cracking the 300-point mark was a feat only accomplished by 13 teams and this is where things got tight. The difference between the top of that pack and the bottom was barely a few kills. Ultimately, it was Symfuhny, Tommey, Frozone, and Swagg who led their Trios into the final rounds, however.

After some extremely close lobbies and a handful of wins, it was Shmfuhny, HusKers, and Zlaner who proved to be the strongest of the top four. Just two points separated them from the second-place team of Swagg, Booya, and Superevan. Additionally, the team of TTinyy, Rallied, and Mayappo_ won $10,000 for achieving the most eliminations throughout the day at 78 kills.

When did the ROKKR Royale tournament start?

The ROKKR Royale’s Warzone tournament was scheduled to kick off on Tuesday, September 29 at 12pm PT / 3pm ET / 8pm BST and wrap up on Wednesday, September 30, but it was postponed due to game crashes caused by the new update.

Instead, it transitioned to a single-day event that started on Wednesday, September 30 at 12pm PT / 3pm ET / 8pm BST and lasted for around five hours.

Warzone fans were able to watch their favorite streamers and pro players on Call of Duty’s official Twitch channel, with the event hosted by Alex ‘Goldenboy’ Mendez and commentary from CDL casters Lottie Van-Praag and Miles Ross.

Many of the players were also sharing their own perspectives throughout the event as per usual. We’ve embedded the official hub stream below for you to catch up.

Who played in the ROKKR Royale? – players & teams

There were 34 trios competing in this competition – many of which were stacked with the biggest streamers, influencers, and professional Call of Duty League players. 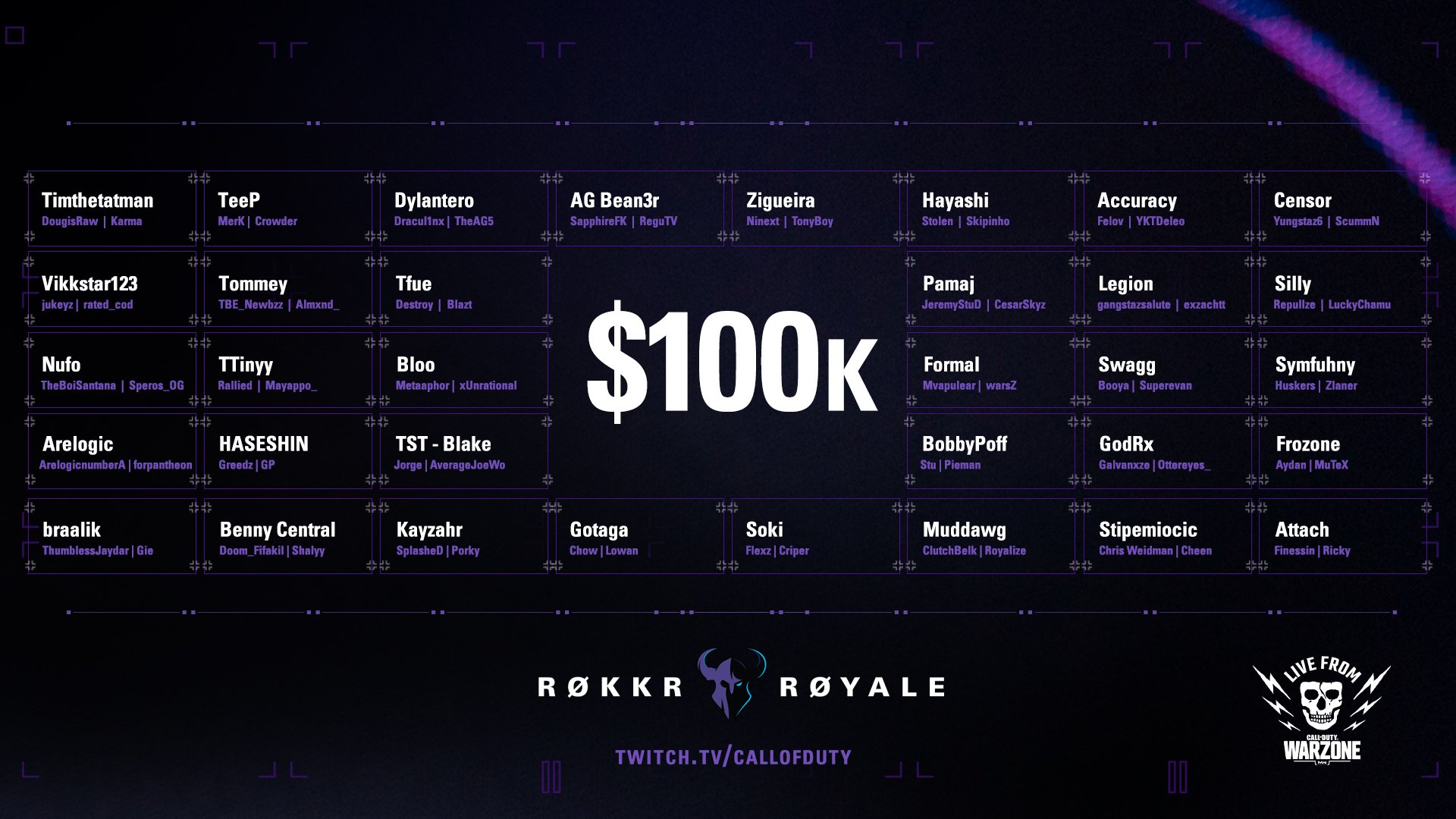 The full list of teams that competed in today’s ROKKR Royale Warzone tournament.

While an original format was set to feature competition across two days, a minor delay resulted in a major format change. The event transitioned to a single-day tournament instead. To start things out, teams had four hours to play their absolute best. The four best games from this window were added up, and the top four teams were able to advance to the next stage.

As usual, points were accumulated through kills and overall wins. The same rules applied for the final section of the event with the top four lineups. Teams had two hours here to set their best two games, with the most successful Trio walking away with $45,000.