Despite high expectations, this Call of Duty off-season’s Rostermania has come to a grinding halt, and pro player Michael ‘SpaceLy’ Schmale has given his explanation for the delay.

Many within the CoD community expected Rostermania to pick up after the CWL revealed the competitive format to be 5v5 for the upcoming season.

However, that has not been the case, as Red Reserve and Team EnVy have been the only top organizations to have made any major roster announcements after the format reveal.

According to SpaceLy, the delay is being caused by a single person, whose decision making process is holding things up for everyone else.

“All this waiting is literally based off 1 person holding everyone else off on making moves,” SpaceLy tweeted. “As soon as that person commits to something, it domino effects the rest of the roster changes.

Because SpaceLy never revealed the identity of the player, a someone brought the question up on Reddit, and the mysterious ‘CodBurner’ replied with an answer.

According to the unidentified insider, the person SpaceLy was referring to is Luminosity Gaming player Johnathon ‘John’ Perez.

Apparently, John hasn’t decided on his future yet because former OpTic Gaming pro Damon ‘Karma’ Barlow wants to play with him.

If Karma were to rejoin OpTic’s roster, John would allegedly not be willing to follow him there because he has much more lucrative offers on the table. 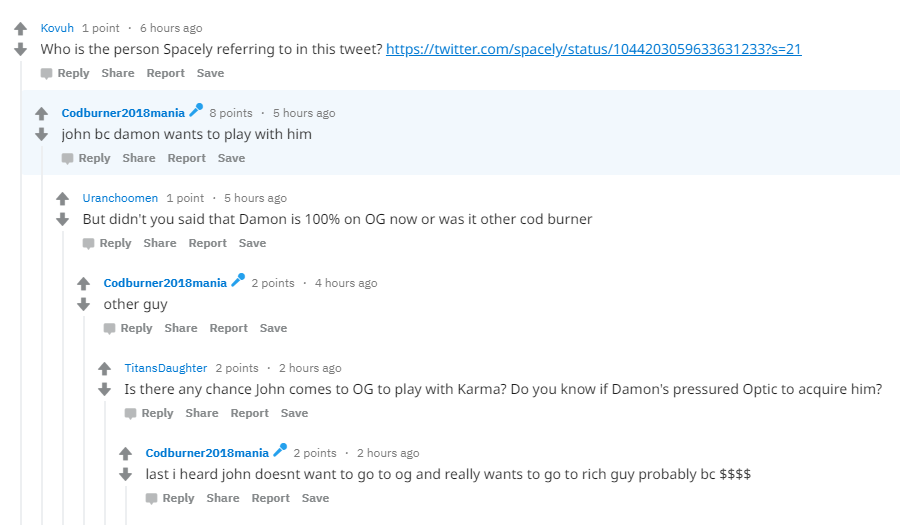 Whether or not the CoDBurner and SpaceLy are talking about the same person remains unconfirmed, and it’s possible that the insider information provided may not even be factual.

If this report is true however, fans can expect organizations to start announcing their roster moves once John does decide on where and with whom he will play during the upcoming Black Ops 4 season.