Rise Nation’s Austin ‘SlasheR’ Liddicoat has weighed in on the weapon variety debate in competitive Call of Duty, saying “pros will find the best class and that will be used 99% of the time”.

SlasheR’s Twitter rant began with him saying “Do people actually believe that if all the guns were allowed in CoD that there would be more weapon variety? LOL”.

The 2016 world champion proceeded to state “there will ALWAYS be a BEST AR and BEST SUB no matter what’s allowed and no matter how much they want to ‘balance’”. 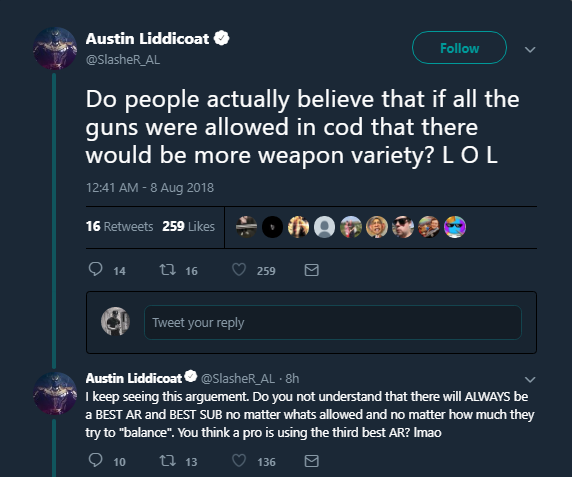 The 23-year-old assault rifle player believes that a ban and protect stage is the only way of creating variety:  “the ONLY thing that actually created weapon variety was the ban and protect and that’s because teams would ban the best AR or best Sub”.

In conclusion, SlasheR claims that the create a class system “allows us to pick the best loadout for free every spawn. It doesn’t matter what’s allowed” because “pros will find the best class”.

The ban and protect system, seen in games like Black Ops 3, is a veto phase where teams can choose to protect a certain weapon, ability, item and perk, or ban it from being used.

SlasheR clearly believes that seeing a system like this return in Black Ops 4 would be preferable to simply allowing all weapons to be used in competitive play.

This is a debate that has been raging within the competitive Call of Duty scene for years now, with some arguing that changing the core game alienates the mainstream community, and others saying that the “out of the box” version of any Call of Duty game is not viable for competitive play.

eUnited’s James ‘Clayster’ Eubanks recently suggested that Call of Duty esports should try playing 5 vs 5 and allowing all maps, weapons and more in Black Ops 4, saying that it could result in record breaking viewership.