The final week of the CWL Pro League passed its halfway mark on Tuesday, July 2, leaving just two more days of matches in the regular season.

As the regular season of the CWL Pro League draws to a close, more and more teams are finding out their fate when it comes to qualifying for the Playoffs at the upcoming CWL Finals event.

After four more cross-divisional matches were played on July 2, all of the Playoff spots from Division B were wrapped up, leaving just one more spot in Division A to be decided in the coming two days.

The first match of the day saw Division A’s Midnight Esports cast aside Team Heretics 3-0 to keep their grip on the fourth and final top-four spot in Division A.

The win improved Midnight to 11-9, keeping them one game ahead of Team Reciprocity, ahead of their difficult matchup against eUnited tomorrow.

It got scary for @GGMidnight_, but they close out the S&D to go up 2-0 vs @TeamHeretics. https://t.co/NKHQSgV6Gh@ScufGaming Play of the Game: @Zaptius and @SaugaRoyalty combine for a 2v4 round win! pic.twitter.com/rbFfYVMvAv

OpTic continued their blazing roll in the Pro League after beating Elevate 3-2 in a match that went all the way to a game five, round 11.

The win improved the Green Wall to a 16-4 record, by far the best in Division A and tied with eUnited for tops overall.

Although Elevate came into the match already eliminated from top-four contention in Division B, they pushed the CWL Vegas champs to the brink, who were saved by this miraculous 2v5 ninja-defuse play by Seth ‘Scump’ Abner in the final round.

Both Team Reciprocity and Team Envy came into their July 2 matchup knowing that a loss would eliminate them from finishing in the top four of their respective Divisions.

The series went back-and-forth, much like the OpTic-Elevate match, going all the way to a game five, round 11.

In a thrilling ending, Reciprocity’s clutch gene proved too strong for Envy to handle, as they pulled the 3-2 win to stay just one game behind Midnight for the fourth spot in Division A.

Envy, on the other hand, were eliminated from top-four contention, giving the fourth and final Playoff spot to Heretics, despite their loss earlier in the day.

ROUND 11 MADNESS!!! @TeamReciprocity win a WILD final round to defeat @Envy in the series!

Envy are out of playoff contention with the loss, @TeamHeretics will be the fourth team out of Division B! pic.twitter.com/mBYVRhEXmL

The final match of July 2 pitted the two teams that had come in second at the previous two major tournaments, as Gen.G looked to clinch a Playoff spot with a victory.

After a very strong start saw Gen.G take a 2-0 lead, eUnited came roaring back to take the series to a deciding fifth map.

However, the CWL Anaheim finalists were able to stop the comeback right there, handing eU their first loss in 10 Pro League matches and clinching the third Playoff spot in Division A.

Give em all to @ColtHavok! He shuts down the S&D with an ace, @GenG up 2-0 on @eUnited! https://t.co/NKHQSgV6Gh #CWLPS4 pic.twitter.com/BB7kzUY7uS 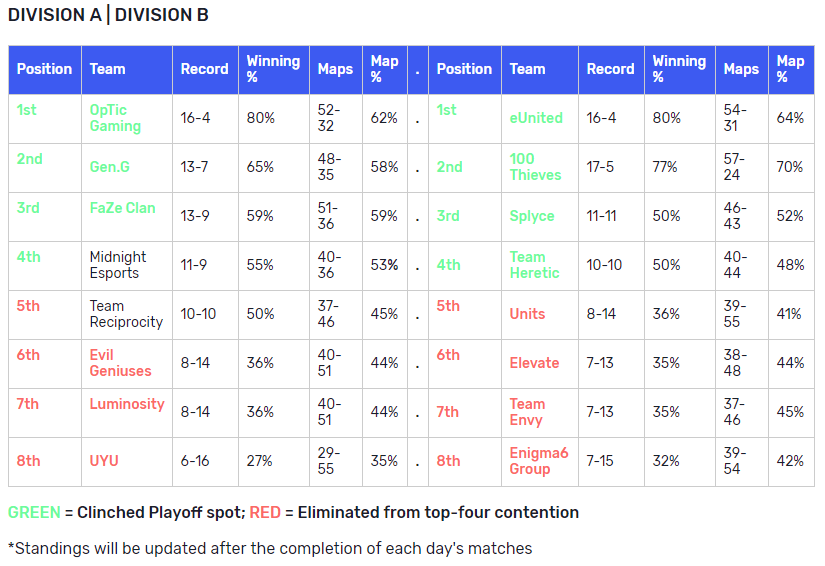 The third and penultimate day of matches of the CWL Pro League will take place on Wednesday, July 3, as the final top-four spot in Division A is still up for grabs.

Gen.G take on Elevate to start the day, followed by Heretics facing Reciprocity. Midnight face a tough challenge against eUnited, and the day will round off with another eClassico between Envy and OpTic.