OpTic Gaming Los Angeles swept the Minnesota ROKKR and eliminated them from the Call of Duty League Playoffs before icing that bruising with some of the most brutal trash talk we’ve seen this season.

Back in early August, OpTic Gaming posted a video making fun of the ROKKR, whose newest starter, Kaden ‘Exceed’ Stockdale, responded by insinuating that OGLA was getting beaten in scrims against Minnesota.

OpTic’s Zack ‘Drazah’ Jordan and Kenny ‘Kuavo’ Williams took offense to that Tweet back then and, a few weeks later, got to put the nail in the coffin after drubbing Minnesota 3-0.

At the time, it was actually Austin ‘SlasheR’ Liddicoat who got the most involved — noting how ridiculous it was for a recent pickup to talk trash over scrims. But that conversation took a much more intense turn after their postseason matchup played out. Unfortunately for Exceed, Drazah and Kuavo have a good memory and clearly remembered the earlier banter because they repaid it tenfold after their playoff blowout.

Kenny hit Exceed with a “bye bye, stick to scrims” and included a picture of him hoisting a tournament MVP award from his dominant Team Kaliber days.

Drazah, on the other hand, played it less chill, dropping a “3-0’d when it mattered, dogs**t f**k” on the recently defeated opponent. As far as trash talk and banter go, this has to be some of the spiciest we’ve seen all season — fittingly, given how important this time of the year is. 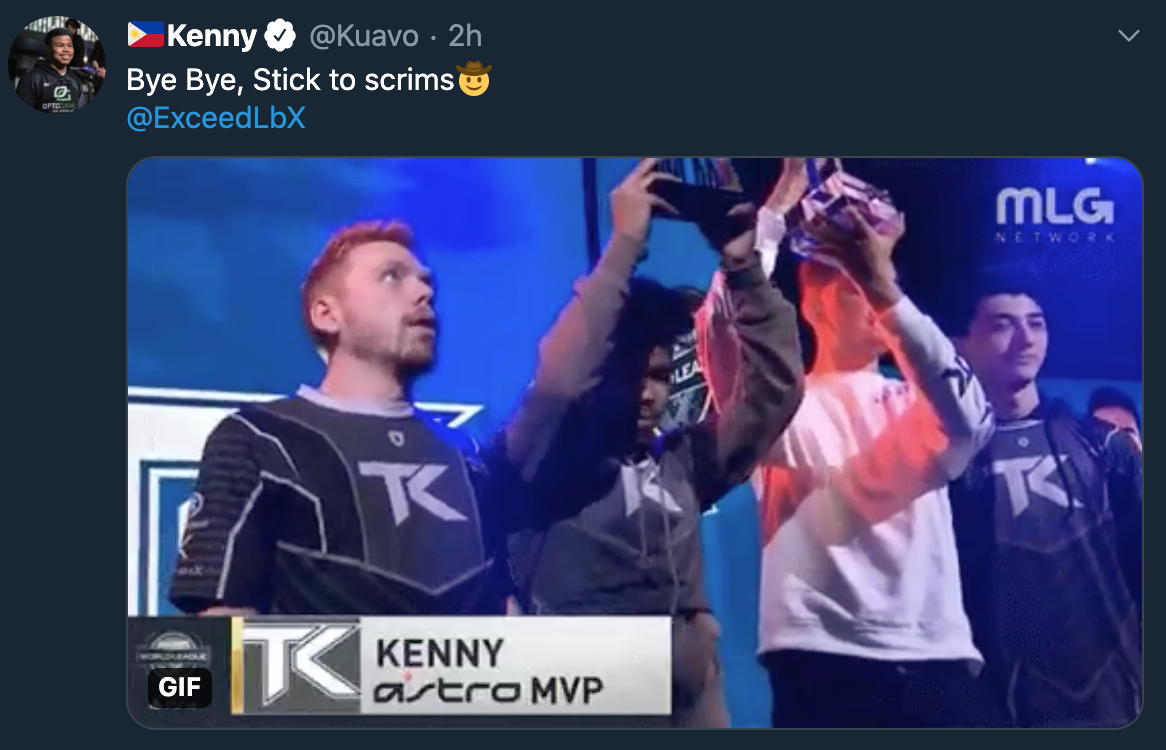 Fortunately or unfortunately, depending on which side you’re on, it appears that the OGLA boys kept the trash-talking there. Just as the ROKKR’s season is over, Exceed appears to be done with the banter too: in his postgame tweet, he gave props to the winners and focused on “looking forward to the future.”

Heartbroken. GG’s to optic they played well. Lost every respawn by ourselves. Can’t believe it. Shoutout @ROKKR for helping live out my dream. They’ve been absolutely amazing. Looking forward to the future

As for how the rest of the ROKKR players responded to Kenny and Drazah trashing their teammate, publicly it was just Justin ‘SiLLY’ Fargo-Palmer who defended Exceed against Kuavo’s dig, letting the OpTic star know that he was being “toxic.”

But Kuavo responded saying it was only directed at Exceed, not the rest of the Minnesota roster, so at least it’s not all bad blood. Regardless, it will be a long offseason for Exceed and the ROKKR, who finished tied for ninth in the Playoffs and ended their inaugural campaign on a CDL-record 10-match losing streak.

Only towards him, GGs brotha.

You can watch all of the postseason matches live via our Call of Duty League Playoffs and Championship Weekend hub, which includes streams, the schedule, brackets, scores, and more.