Following the conclusion of the $325,000 pro tournament on May 5, many of the US-based players and teams embarked on their long trek back home.

TeeP was fortunate enough to get back to the States right the next day, tweeting about how good it was to see his wife after his nearly week-long absence.

Scump, on the other hand, was still stuck in London at the time, expressing his frustrations at that fact in a Twitter response to TeeP.

Instead of being sympathetic to Scump’s situation, however, TeeP decided to take a hilarious jab at the pro player for their performance at CWL London. 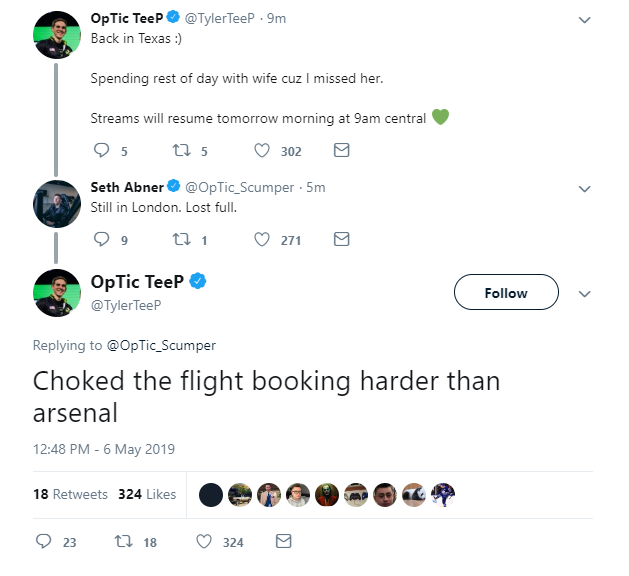 The reference that TeeP jokingly made, of course, was about the Winners Bracket Final that OpTic lost against 100 Thieves by a scoreline of 3-1.

In that match, OpTic had several chances to win the game three Control on Arsenal, but two incredible, last-minute surges from 100T stole the game from under the Green Wall’s noses.

The first came when OpTic had a 2-1 lead and a sizable man advantage but lost due to a mindblowing sequence of kills from Kenny at the end.

That was followed by an incredible collective effort from 100T at the end of the final round, which saw them stave off OG with just 0.3 seconds on the clock.

Coming into CWL London as one of the favorites to win the event, it came as no major shock when OpTic Gaming went 3-0 in pool play to finish first in Pool A.

They continued that with two dominant sweeps of FaZe Clan and Team Heretics in the Winners Bracket, setting up a massive match against 100 Thieves to decide who would advance to the Grand Final.

Things took a drastic turn on Championship Sunday, however, as OpTic lost to 100T 3-1 to drop down to the Losers Bracket Final, where they were convincingly swept by eUnited to finish third.

It will be a short turnaround for OpTic following those two losses, as they’re set to resume their Pro League matches on May 13.