After Octane and OpTic were bounced in the group stage for the organizations lowest ever Champs placing, Slacked referenced comments from Octane about LG’s struggles.

Slacked and Octane were teammates on Luminosity and won 2018 CWL Birmingham together, but the pair split in May and Luminosity struggled initially following the breakup.

Octane mentioned LG’s struggles after he left, perhaps jokingly, while being interviewed at the CWL Pro League.

It was that interview that Slacked referenced in his burn. 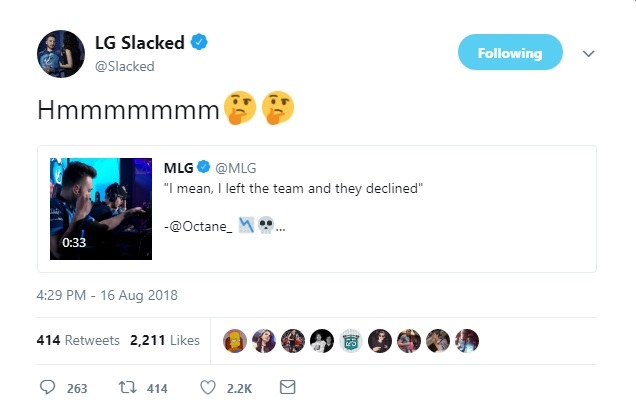 Slacked did not respond.

At the time of the interview, Octane explained he did not mean the quote the way everyone took it.

The Octane and Slacked relationship goes back years, with the pair first teaming together on Elevate in Advanced Warfare.

They stayed together in a move to Rise Nation, where they remained for the entirety of Black Ops 3.

Octane and Slacked moved as a duo once again following the BO3 season, teaming on Luminosity for Infinite Warfare and WW2. They found their first major success in IW, winning CWL Anaheim.

Slacked and LG made it out of their group and will be playing in the knockout stage on August 17, while Octane and OpTic are going home thanks to ACHES.