Call of Duty League’s Toronto Ultra hosted a massive $100k Warzone tournament that featured some of the biggest streamers such as NICKMERCS, TimTheTatman, Tfue, and more. Catch up below if you missed any of the action.

Following Toronto’s Ultra’s impressive win as hosts of the final CDL homestand of the year, they announced that they will also be throwing a tournament on Modern Warfare’s battle royale, Warzone.

Plenty of the top content creators and pro players in Call of Duty kicked off Season 5 to earn their share of the jaw-dropping $100k prize pool. So, here’s everything you’ll need to catch up.

The $100K competition took place over the span of two days. Jumping straight into the Season 5 action, all competitors had to get used to new weapons and drastic map changes. Each trio was stacked full of veteran CoD players and popular streamers alike, though not everyone could make it through the first day.

Many of the biggest names involved were knocked out early but prominent Warzone players pushed through. From former Warzone event winners in Team Aydan and Team Tommey, to the popular event host and content creator NICKMERCS, the competition was fierce.

The quarter-finals on day two saw day one leaders in Team Kayzah knocked out of the running alongside a handful of others. Ultimately, it was Team Rated and Team NICKMERCS that made it all the way through to the Grand Final matchup. Things could not have been closer from here on out.

At the conclusion of the first map, the commentary team was left stunned as the scoreline was tied. However, a final kill ticked over in the post-lobby screen, leaving the first map score at 95-94. “We’ve casted a lot of Warzone… I don’t think we’ve ever had anything quite like this,” Maven said. After another round of action, it was NICKMERCS and his trio that finally came through with the overall victory.

The Toronto Ultra Warzone event spanned over two days in total. The first day kicked off on August 5 and wrapped up the following day, August 6.

The second day of the tournament started from 12 PM PST/3 PM EST / 8 PM BST on Thursday, August 5 and ran for a few hours.

One of the BIGGEST @CallofDuty #Warzone tournaments coming to you LIVE August 5-6! Watch @NICKMERCS, @timthetatman, @DrLupo, @Vikkstar123, @Methodz, @Symfuhny and many more compete for 100K ?

While Toronto Ultra hosted the Warzone tournament, the event’s action unfolded on Call of Duty’s official Twitch channel, which can be found below.

The official stream was commentated by Maven, Puckett, Merk, and Lottie with appearances from other Toronto Ultra guests during the broadcast.

Many of those competing in the event were also been streaming their POVs, giving viewers plenty of choice on how to tune in.

Who played in the Toronto Ultra event?

There were 32 teams-of-three competing in Toronto Ultra’s Warzone $100K Payout clash on August 5.

Stars like NICKMERCS, Tfue, Nadeshot, Cloakzy, and more all appeared in the event. Here’s a full list of the players and teams that took to Verdansk. 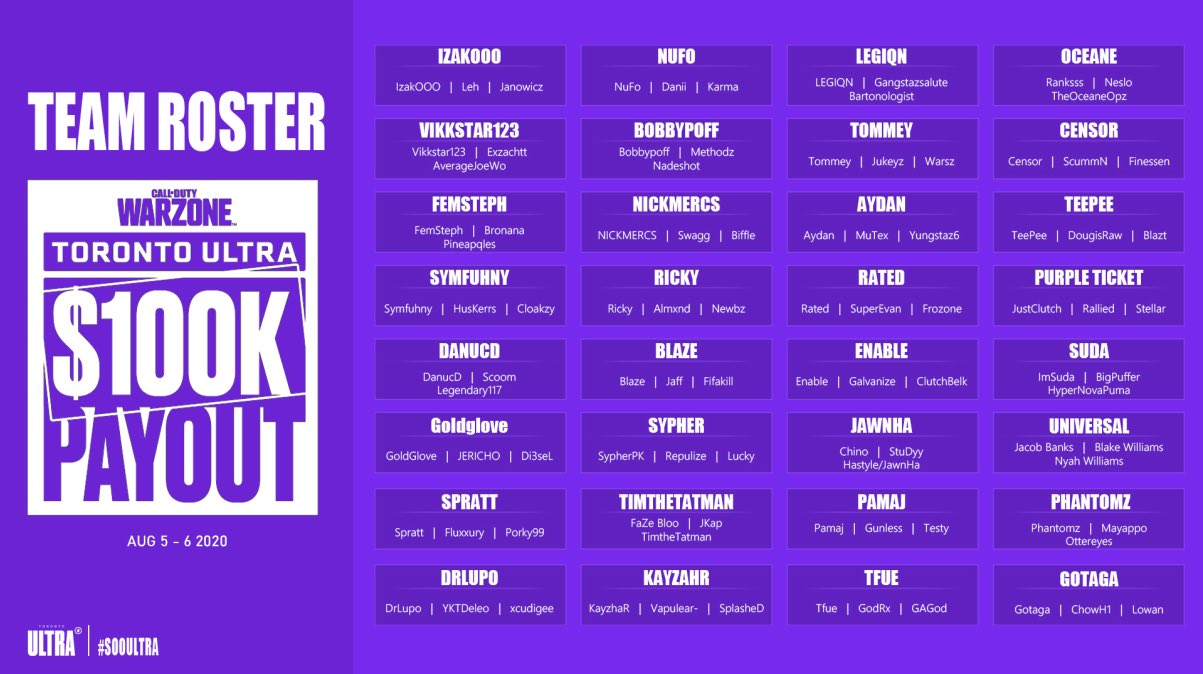 All confirmed teams and players