Despite the MP5’s popularity declining following a series of weapon tuning updates, streamer Nick ‘NICKMERCS’ Kolcheff has shared an MP5 class to get it back in favor; ideal for the ongoing Warzone Season 5.

The MP5 has come to dominate nearly all forms of Modern Warfare, remaining the pro players’ SMG of choice since the game’s launch back in November. However, while it dominated the early months of Warzone, it has seen its popularity fall to some extent as players try other weapons.

NICKMERCS, though, has remained faithful to the classic SMG and has now shared his favorite loadout for Season 5. It won’t surprise anyone that it’s best used alongside a longer-range weapon, with Kolcheff describing it as the perfect “pocket” weapon. 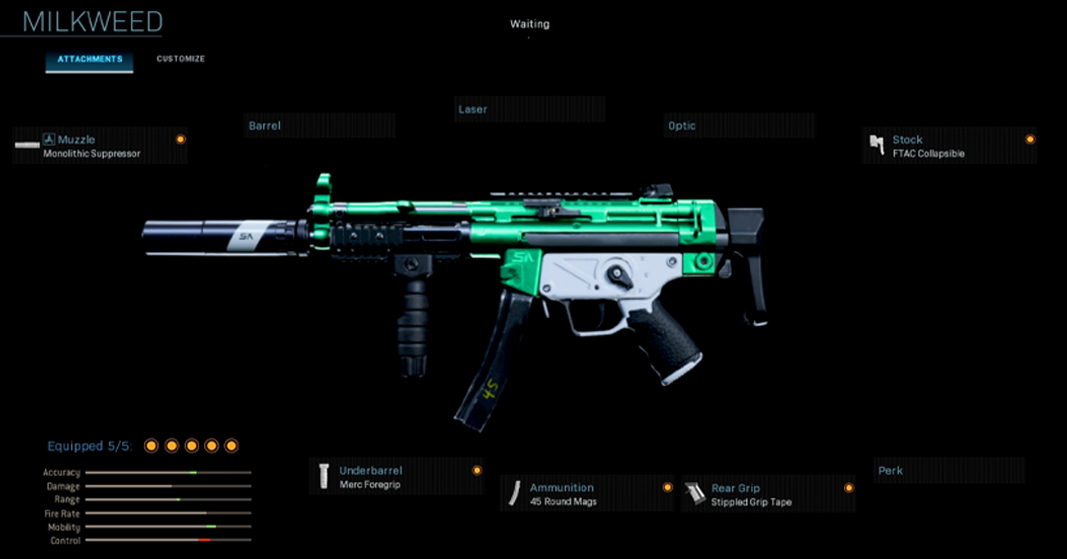 First up is the Monolithic Suppressor. Surprisingly, this is fairly optional on the MP5 given the number of silenced barrels players can equip. However, Kolcheff has gone for the suppressor itself, which will buff damage range and keep you off enemy radars.

The FTAC Collapsible stock and Stippled Grip Tape will massively reduce ADS time, and boost strafing speed. The 45 round mags will keep you in the action for longer, while the Merc Foregrip will help to stabilize shots.

There is no need for an optic, as the MP5’s iron sights are perfectly adequate for the ranges it’s viable at.

Given this loadout’s suitability for close-range engagements, it’s best run with a longer-range weapon in your other slot. We’d recommend an AR like the Kilo 141, or a sniper rifle like the AX-50 or HDR. The call, however, is ultimately yours.

As NICKMERCS says, this is the perfect weapon to have in your pocket for close-range engagements.  We’ll see how the meta changes as more weapons are added but for now, this old-favorite remains as strong as ever.