Call of Duty: Modern Warfare‘s multiplayer characters are set to have new customization options such as tattoos and body art, as revealed in new art book.

Character customization options, such as in-game outfits and weapon skins, have been a popular feature among most online games to help players choose their characters distinctive look and stand out from other players – and to provide new content to sell.

Call of Duty is among those games which offer players the chance to unlock or purchase many unique customization options with different weapon kits and character skins to keep their game fresh, and Modern Warfare will be introducing some new options. 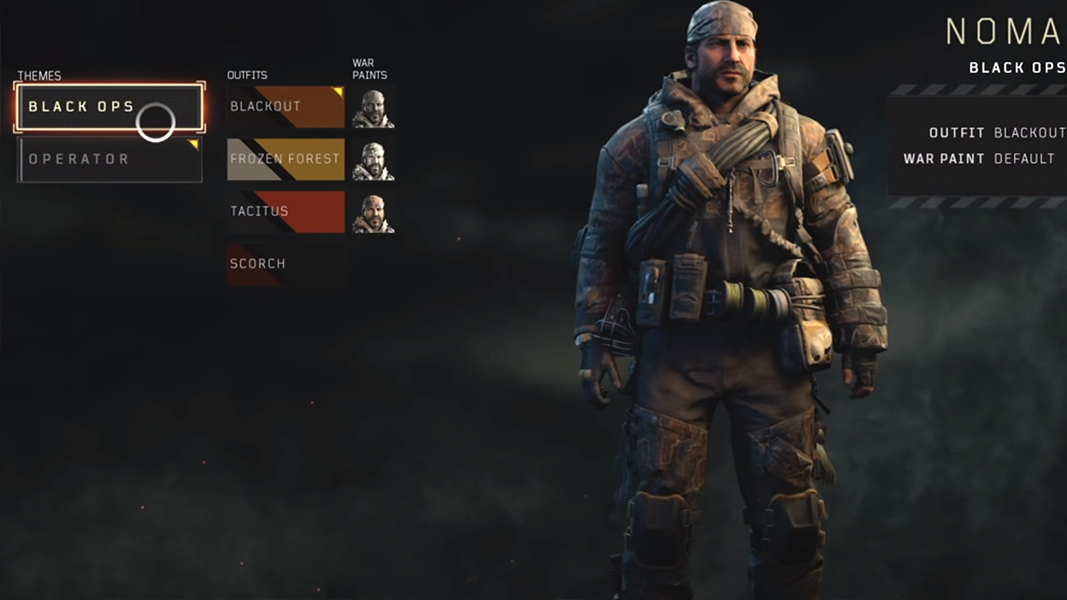 Players will have even more choices to customize their characters, after images from an upcoming book titled “Making Call of Duty: Modern Warfare” by Andy McVittie, who is known for documenting the development of many popular games such as with books like “The Art of Titanfall.”

The images feature a first look at a collection of new tattoo concepts and other forms of body art for multiplayer characters in Modern Warfare which players will likely get to choose from when customizing their soldier.

“Customization options are a crucial component of the multiplayer experience.” writes McVittie, “Our Combat Operators have a considerable amount of variations and incarnations. It’s amazing to think we went to this level of detail to render onto the character’s skin.” 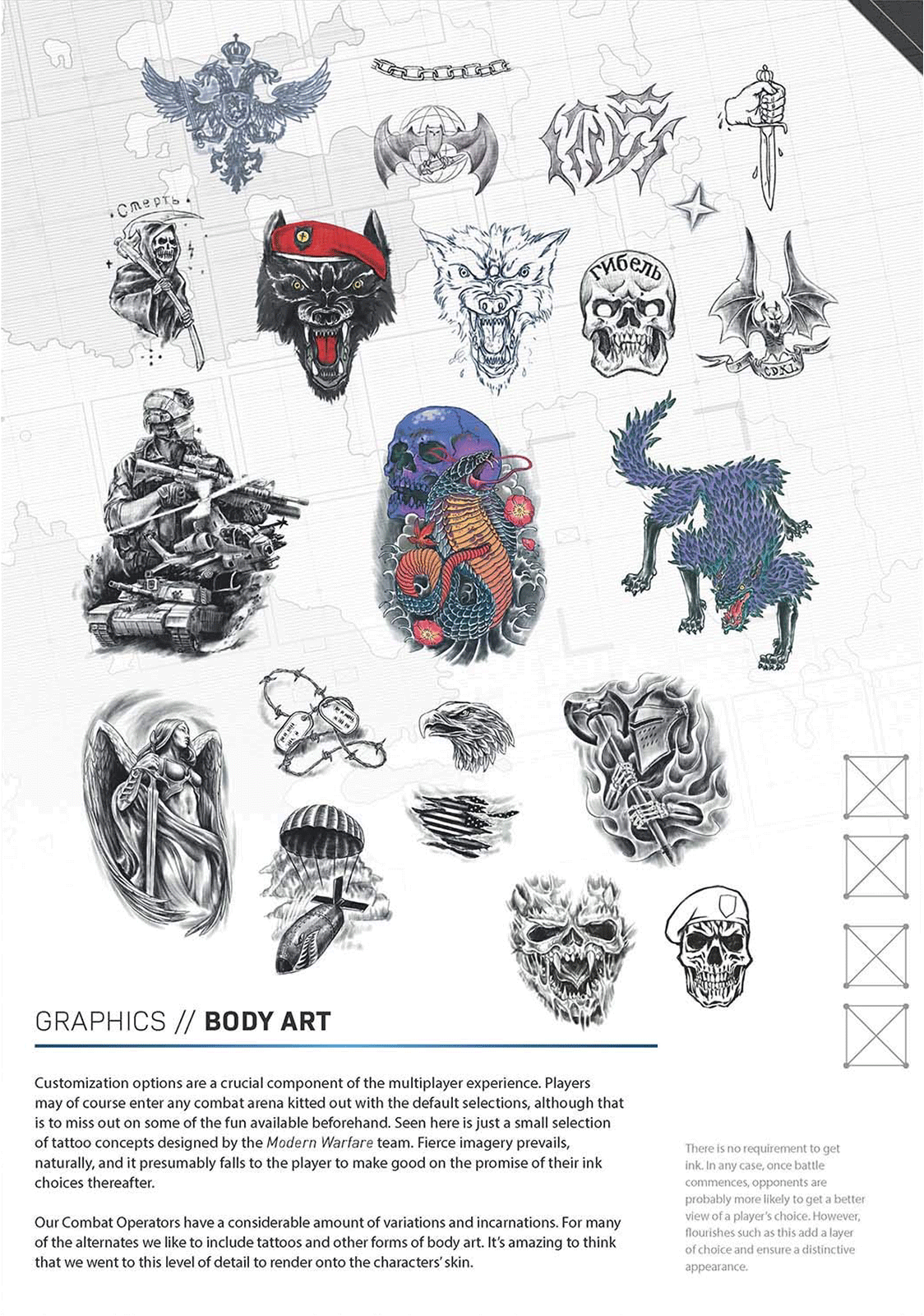 Some of the body art and tattoo concepts for Modern Warfare’s multiplayer.
500[ad name=”article3″]

Alongside the images of character tattoos and body art, sketches for some of the Multiplayer Faction Icons were also revealed.

It was revealed that these icons only make up a sample of what will be available for players to use as “faction insignias in the multiplayer battlegrounds.”

Among the images revealed was also a look at some of the new Combat Operators which will be playable in Modern Warfare’s multiplayer mode, such as Bale and Syd. 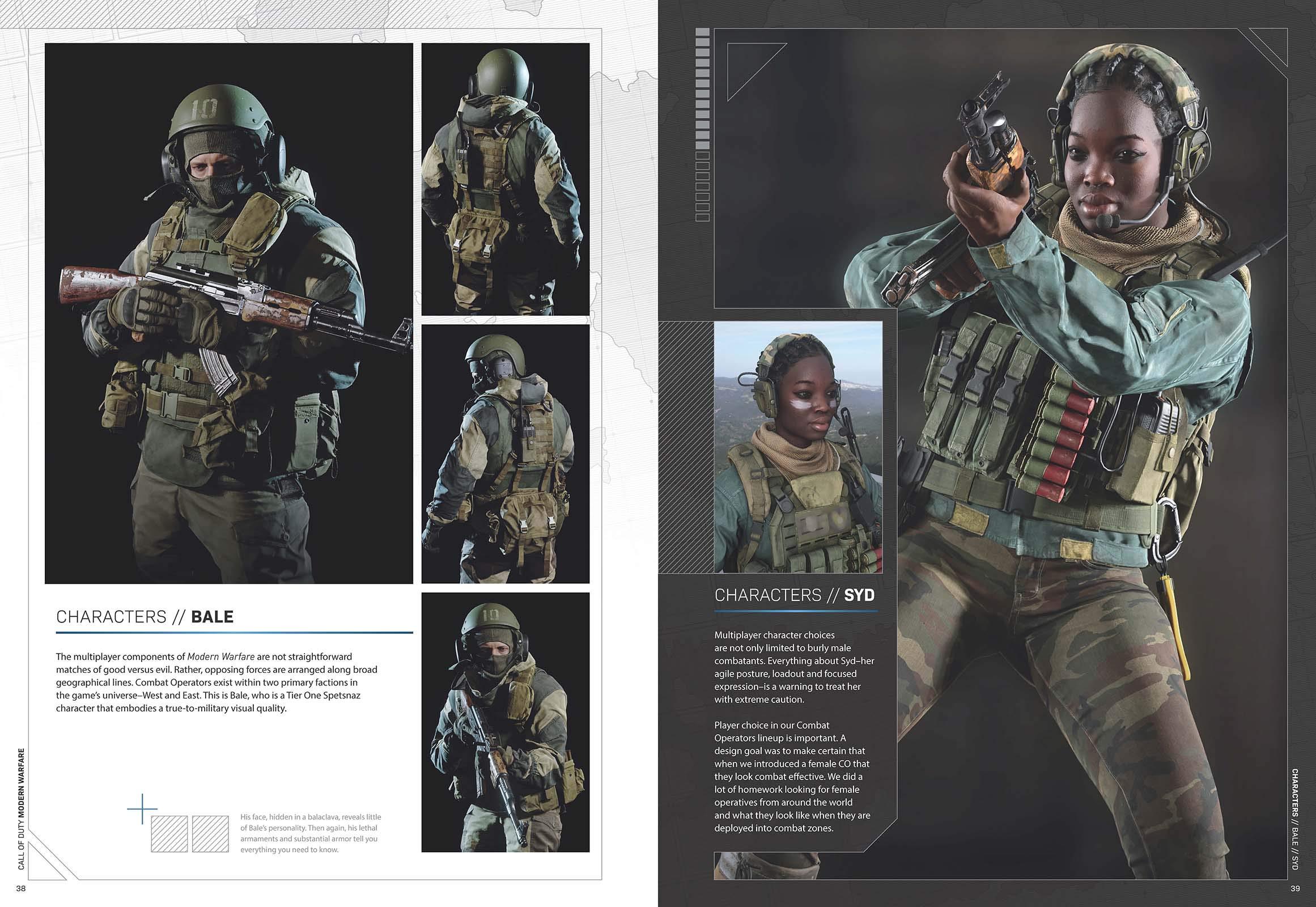 With Activision Blizzard claiming that Modern Warfare is set to have the “largest post-launch content” in Call of Duty history, it is unknown if the tattoo and body art aspect of character customization is to be expected to be included in the game launch on October 22.

Modern Warfare have also revealed the addition of even more customization options with their new Gunsmith feature for weapons which was displayed by many of the streamers during the game’s multiplayer reveal.

There has been no information shared on how players will be able to acquire the tattoos and body art cosmetic items in Modern Warfare as of yet, but based on previous titles it is likely that they will be available to earn through the ranking system as well as through supply drops.