Australian Call of Duty pro Denz is looking for an opportunity on a team with North American or European players.

He believes staying in Australia will prevent him from advancing his professional career.

Denz made the announcement in a tweet on September 9. 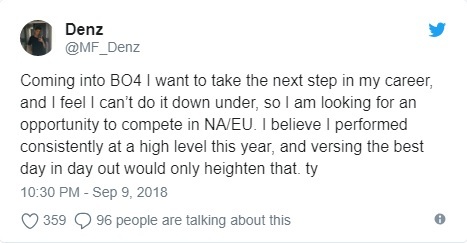 Coming into BO4 I want to take the next step in my career, and I feel I can’t do it down under, so I am looking for an opportunity to compete in NA/EU.

He feels he is ready to make the leap, based on his consistent performances in WW2.

I believe I performed consistently at a high level this year, and versing the best day in day out would only heighten that. Ty

Denz played for the Australian team Mindfreak and are rarely challenged by other APAC teams in qualifying for the CWL Pro League.

Mindfreak struggled to adjust to the higher level of competition, posting a 4-10 record in CWL Stage 2. Denz however, was a standout performer.

He carried his team through Search and Destroy with a 1.28 K/D, one of the highest marks in all of Stage 2.

Denz was also solid in Hardpoint, finishing with a 1.08 K/D while leading his team in engagements and finishing second in hill time.

It was previously rumored that Black Ops 4 would feature more region mixed teams due to a new ruleset.

Rostermania is ongoing, though signings are slowing down over uncertainties about team sizes and format.

The Competitive reveal of Black Ops 4 is set for September 19 and a flurry of roster moves is expected to follow. Denz being available may cause even more shuffling among the top organizations.