Former Call of Duty World Champion, Adam ‘KiLLa’ Sloss, claimed that he should be on a CWL Pro League roster, and even hit out at ex-teammate Chris ‘Parasite’ Duarte over the debate.

In the lead up to the CWL Finals in Miami, many amateur players will be looking to battle it out in the open bracket event to secure a Top 16 placing and book their spot at the prestigious Call of Duty World Championship 2019.

However, one of the former world champions, KiLLa, expressed that he feels he is too good a player to have to battle through the open bracket, and claimed that he deserves to be on a CWL Pro League team. 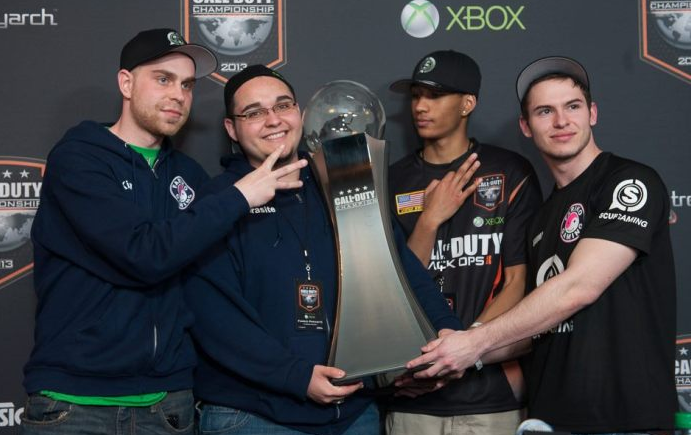 KiLLa won the Call of Duty World Championship in 2013 alongside Parasite, MirX and Karma.
[ad name=”article2″]

KiLLa narrowly missed out on making it into the Pro League qualifier at CWL Vegas after placing T48, (top 32 made the cut), despite one of his teammates not showing up to the event and having to play with a stand-in.

He has failed to make his way on a Pro League team since and explained his disappointment with his current position on July 14: “Not to sit here and boast about myself but how am I not on a league team?” He asked, “Are people really this blind to greatness?”

The former OpTic Nation star highlighted what had happened the last time a Pro League team took a chance on him, managing to place 2nd at the Season 2 Playoffs with Dream Team during Black Ops III, saying, “Last team to pick me up was dT and I led them to a finals and put 11 racks in their pockets.”

Not one to sit here and boast about myself but how am I not on a league team ? Are people really this blind to greatness ?Last league team to pick me up was dt and I led em to a finals and put 11 racks there pockets . Mind blowing honestly

Midnight pro player, Parasite, seemed to try to make light of the situation, jokingly replying to KiLLa with an image from Toy Story captioned: “You’re Trash… just like me.”

KiLLa did not appear to be in the joking mood, however, taking shots at Parasite’s lack of success in recent times compared to previous years, “You play with notable players and haven’t done anything in years.”

Wat fool u play with notable players and still haven’t done anything in years . Funny wen I tweeted this it reminded me of u and almost didn’t send it . I’m better than u on my momma dawg

The pair continued to go back and forth with KiLLa then suggesting that Parasite should have picked him up, by asking him who the worst player on Midnight is, “So who’s your worst player?” He replied, “Do you ever want to be a contender again?” – hinting that he would be a better option.

So who’s ur worst player then idu ? Do u ever wanna be a contender again wake up hello

Parasite explained that rosters were already locked in for the remainder of the 2019 CWL Season and claimed that he himself is the worst player on Midnight, and was not in position to pick KiLLa up, before wishing him the best.

Yeah man watever u say . Crazy how some1 can put 100 bands in ur pocket and people will stilll be ungrateful . Unbelievable

KiLLa still wasn’t satisfied, calling Parasite ungrateful after suggesting that he was fundemental in their CoD Champs victory together in Black Ops II, resulting in the team winning $100,000 each.

He will have to qualify at the CWL Finals in Miami on July 19, if he wants to get a chance to replicate his previous success in the final event of year.