KEEMSTAR explains why he might abandon Friday Fortnite and switch to Call of Duty: Blackout - Dexerto
Call of Duty

KEEMSTAR explains why he might abandon Friday Fortnite and switch to Call of Duty: Blackout

With the future of Friday Fortnite now in more doubt than ever before, it looks like Daniel ‘KEEMSTAR’ Keem has decided to switch his focus to Call of Duty’s new Blackout battle royale title.

Despite recently stating that he was in the process of bringing his popular Fortnite competition back, the YouTuber was forced to reconsider when Epic Games announced the six week Fall Skirmish series.

Now he’s revealed that he plans to run Blackout events every Friday “if Epic Games runs events on Friday again”. The events will use the same format as Friday Fortnite but the lack of cross-platform play in Blackout means the platform of choice is currently up in the air. 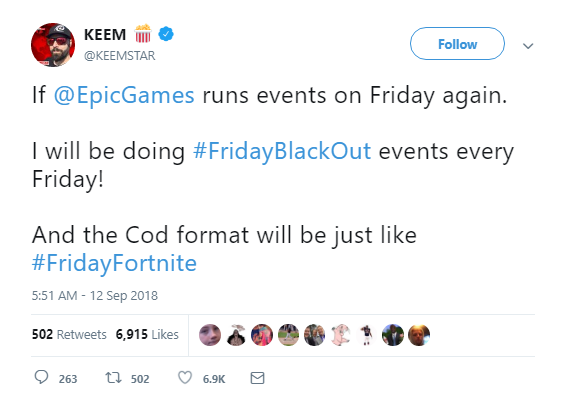 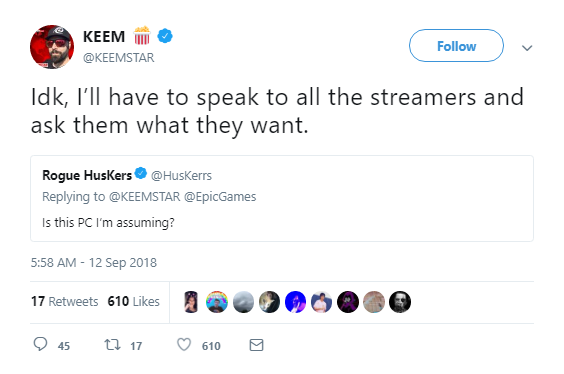 Friday Fortnite was one of the first regular Fortnite competitions to bring together the game’s biggest and best personalities and players, but KEEMSTAR was forced to stop running it due to scheduling conflicts with Epic’s Summer Skirmish series.

The conclusion of that series at the start of September seemed to open up the opportunity to bring Friday Fortnite back, but the announcement of the Fall Skirmish seems to suggest that the same scheduling conflicts (and an inability to compete with the staggering $10 million prize pool) will prevent its return.

Blackout, which is currently available in beta form until September 17, is the Call of Duty franchise’s first foray into the battle royale genre and will release as a standalone title next to Black Ops 4 in October.

Initial reactions to the beta have been positive. Many of Twitch’s biggest stars, including Dr DisRespect, TimTheTatman and Nadeshot have praised the game, and Call of Duty players like Karma and Scump have taken to it like ducks to water.

Whether the game will be enough of a draw to make “Friday Blackout” as successful as Friday Fortnite was is uncertain. However, given the hurdles that KEEMSTAR has been faced with in recent months, a fresh start with a different game could be the best option.