Modern Warfare developers Infinity Ward have been working on a few bugs that are specific to multiplayer map Rust, and fans will be pleasantly surprised with the fixes in the pipeline.

Rust was added to Modern Warfare as part of their Season Two content, and long-time fans of the franchise have been flooding the Call of Duty servers, as they revel in the nostalgia of MW2.

Infinity Ward clocked Rust’s popularity among the masses and so they treated fans to a dedicated one-versus-one playlist — giving players the opportunity to settle any long-standing feuds once and for all!

“1v1 me on Rust, bro!” An entire subculture has emerged from Infinity Ward’s popular map.

Even though Rust has been the hottest map in rotation since its introduction on February 11, there have been plenty of snags that players have been demanding a fix for.

The Modern Warfare subreddit has been inundated with Rust-related issues, from spawning complaints to people dropping frames on certain areas of the map.

Now Infinity Ward have confirmed that they’re working on a fix for the notorious Tactical Insertion glitch, and a bug where players have been getting a drop in frame-rate when climbing the Center Tower.

Could we finally be getting a fix for the frame-rate drop at Center Tower?

According to the Modern Warfare Tracker, Infinity Ward are working on “frame rate issues when climbing the Center Tower on Rust.”

Alongside the FPS bug, the developers are looking at fixing the Tactical Insertion issues where “placing a Tac Insert in certain locations on Rust can spawn the player in a different location.” 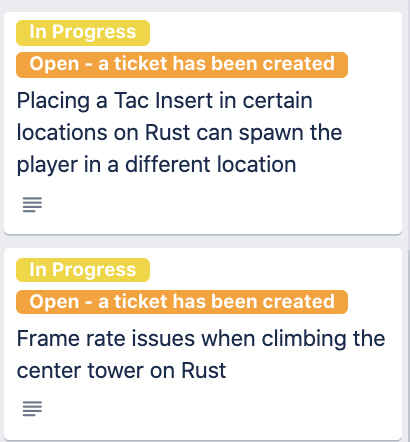 The issues are listed on Infinity Ward’s Trello board.

Fans of the popular map will no doubt be pleased to see that there is an upcoming hotfix for the issues that have been plaguing Rust since its return to the Modern Warfare series.

According to Infinity Ward’s Tracker, players can also expect a number of other fixes in forthcoming updates, such as the pistol animation glitch when climbing a ladder and a few tweaks to the recently introduced ‘Regiment’ feature.