With the Call of Duty League Playoff bracket set following the Toronto Home Series, the CDL has officially released the full schedule for the postseason, which begins on August 19 and sets the stage for August 29’s Championship Weekend.

Split into Winners and Losers, or “Elimination,” brackets, the playoff schedule is moving into a much steadier cadence than the weekend tournaments CDL fans became accustomed to all season.

Instead of each day featuring three-plus matchups, the first three days of postseason play will have just two matches apiece—adding more gravity as each team looks to grab their share of the postseason’s $4.6 million prize pool.

The first three days of the CDL Playoffs move to a slower daily schedule.

Day 1 will begin earlier than most CDL weekends, on a Wednesday, with the first round of eliminations: #10 Paris Legion vs. #11 Seattle Surge then #9 Los Angeles OpTic Gaming vs. in-city rivals, #12 Los Angeles Guerrillas.

Day 2 shifts to the Winners Bracket, with the #6 London Royal Ravens facing the #7 Toronto Ultra and #5 New York Subliners taking on the #8 Minnesota ROKKR.

Day 3 is when some of the higher-seeded teams see their first action, having earned first-round byes due to their regular-season success. The winner of London vs Toronto will battle #3 Florida Mutineers while the winner of the latter will face the #4 Chicago Huntsmen. 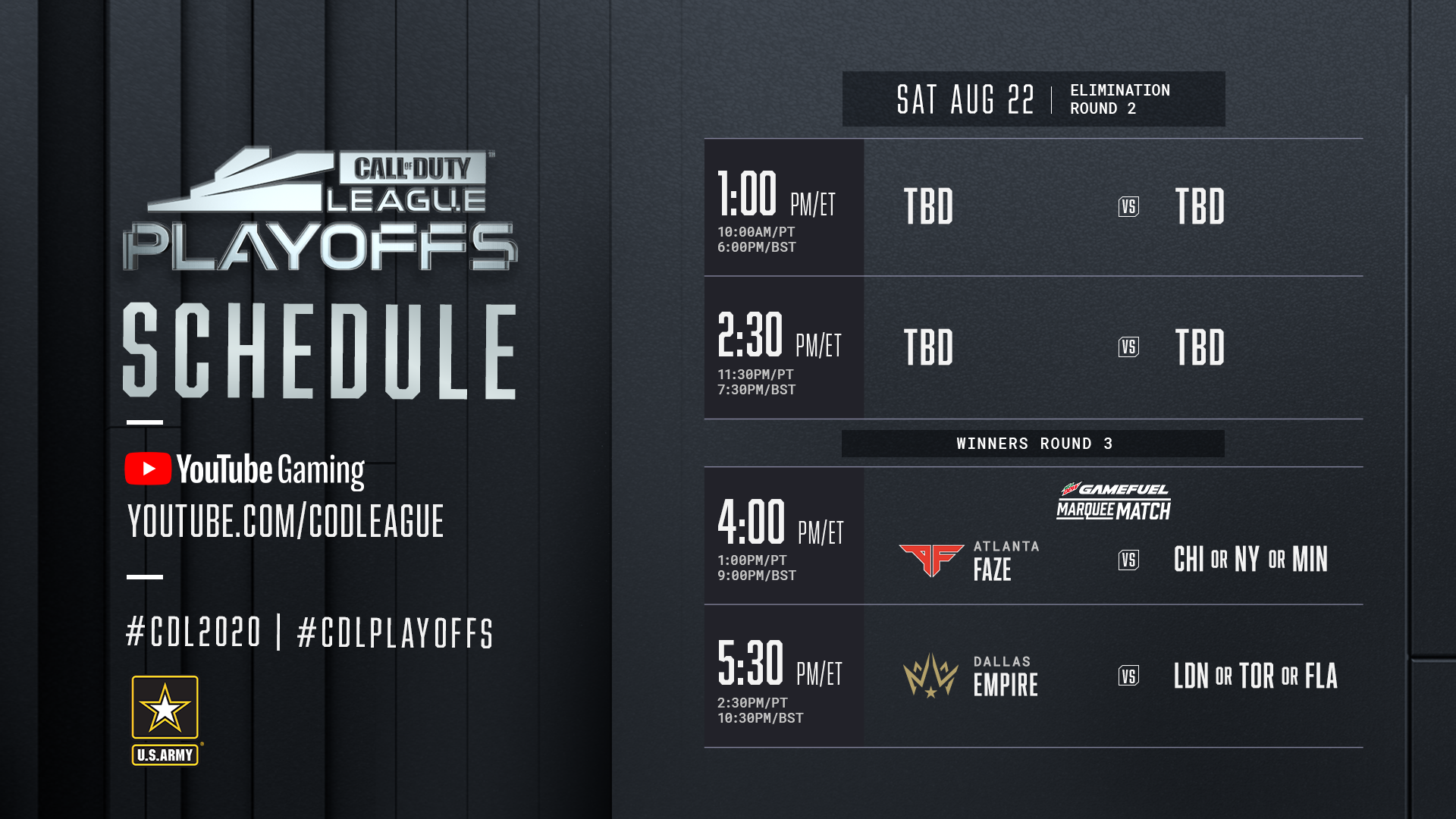 All of those matches will set the stage for the CDL postseason’s penultimate weekend, in which the Elimination Bracket will hit its second round on Saturday just before the last two remaining teams from the Winners Bracket will meet the bye-privileged top seeds, the #1 Atlanta FaZe and #2 Dallas Empire.

Sunday’s schedule is set in terms of times, but every matchup has yet to be decided. The third round of eliminations will start the day, at 1 p.m. ET and 2:30 p.m. ET, followed by the Winners Bracket’s fourth round, at 4 p.m. ET and 5:30 p.m. ET. 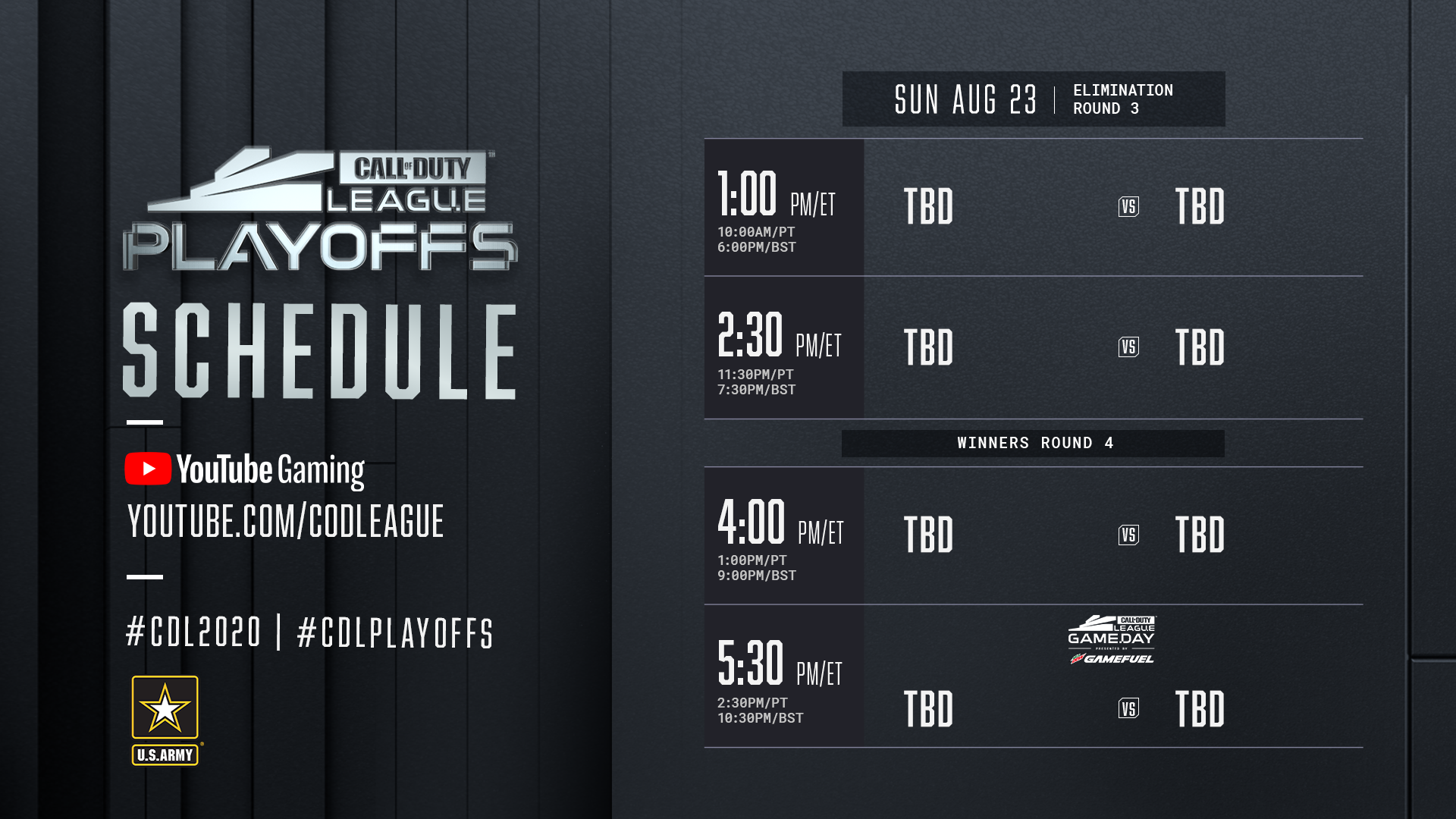 It’s unclear exactly what times will be set for August 29 and 30’s Championship Weekend, but they’re likely to be similar to this first weekend and the bracket will be entirely dictated by this first week of play.

A historic $4.6 million prize pool is on the line, with the final league champions earning a cool $1.5 million just to themselves. Aside from the bottom two teams, who will leave the tournament empty-handed, each organization that finishes in the top 10 will net at least $100,000.

The final Call of Duty League Playoffs and Champs bracket.

Although the daily schedule deviates from the norm, the format for each match remains relatively consistent with best-of-fives for every matchup until the final Championship game. The finals will instead shift to a best-of-nine format, with the Winners Bracket team starting with a one-map lead.

For more information about the Call of Duty League postseason, including specifics about the format, prize breakdown, and more, check out our CDL Playoffs and Championship Weekend info page.