The format for the 2019 CWL season, including open events, online tournaments and the CWL Pro League has been unveiled at the season reveal livestream.

With the change to 5v5 already confirmed, details on qualification for pool play at the first event, region locked rosters, Pro League qualification and more, all needed adjusting.

The Pro League format itself has also drastically changed, as well as an increased prize pool to $6 million. Full details on everything you need to know for the 2019 CWL Season can be found below.

Pool play for the first event of the season, CWL Vegas on December 7-9, will be determined by pro points standings from last season. Crucially, teams will have to retain three players from their stage two roster to qualify.

The top 12 teams from the last year’s CWL Pro League Stage 2 are guaranteed a pool play spot. The remaining four spots in pool play will be competed for by the next top eight teams in pro point standings, again, from the WWII season.

This means that players will no longer have to grind pro point matches on GameBattles from the day of release, which will be a big relief to many. 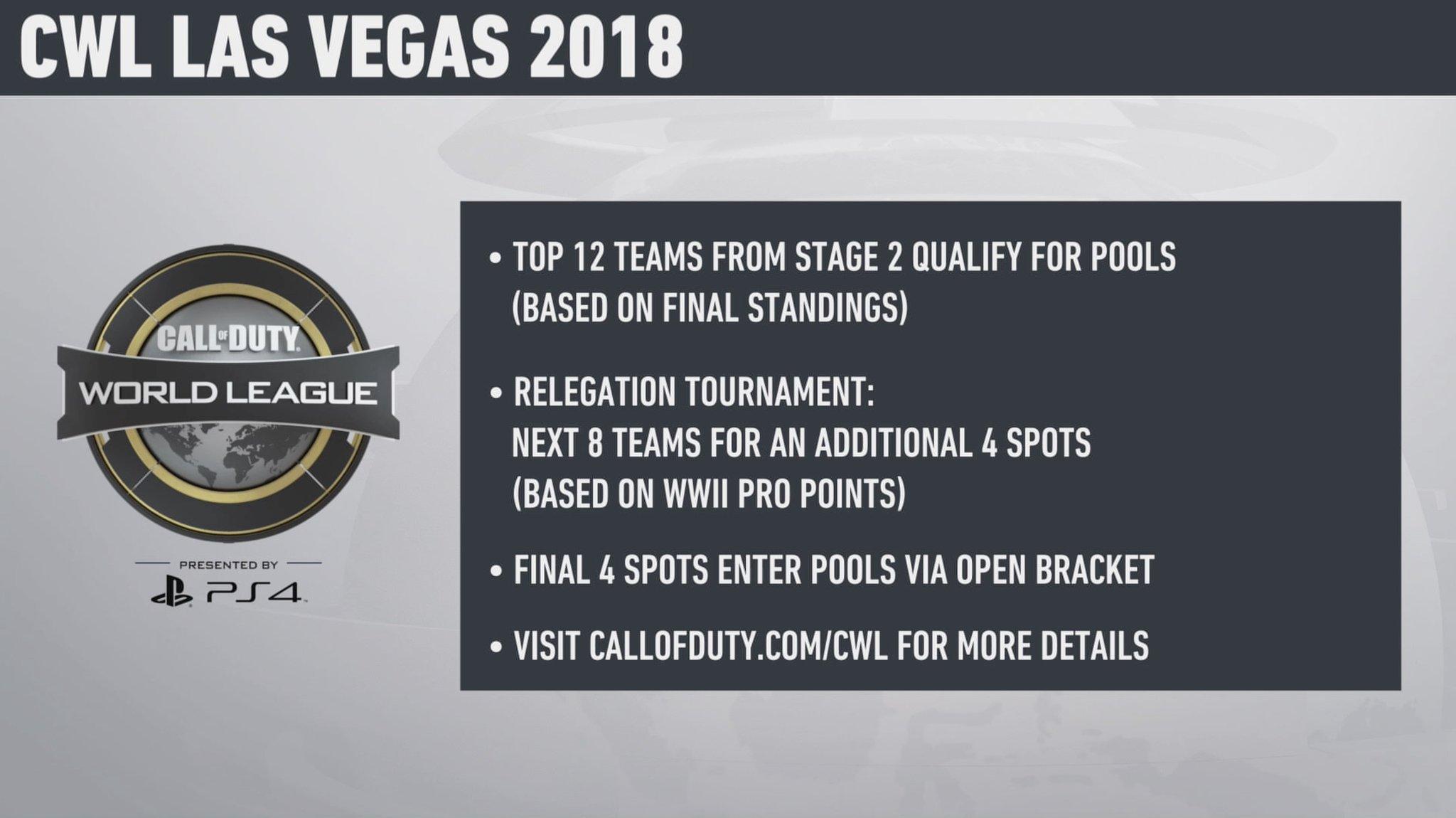 Qualification for the CWL Pro League has also been changed. Every team that finishes top 32 at CWL Vegas will have an opportunity to qualify, while the top four teams automatically get a Pro League spot.

The remaining 28 teams will play a LAN qualifier, to fight for the remaining 12 spots. This qualification event will take place at the MLG Arena in Columbus in January.

The two division format will be retained for the 2019 season, however there will be inter-divisional play, but there will no longer be two stages. Instead only one 12-week stage.

Throughout the season, there will be more opportunities for roster changes, and it was also announced that win bonuses will be in effect for Pro League matches, so each match will equate to a portion of prize money. 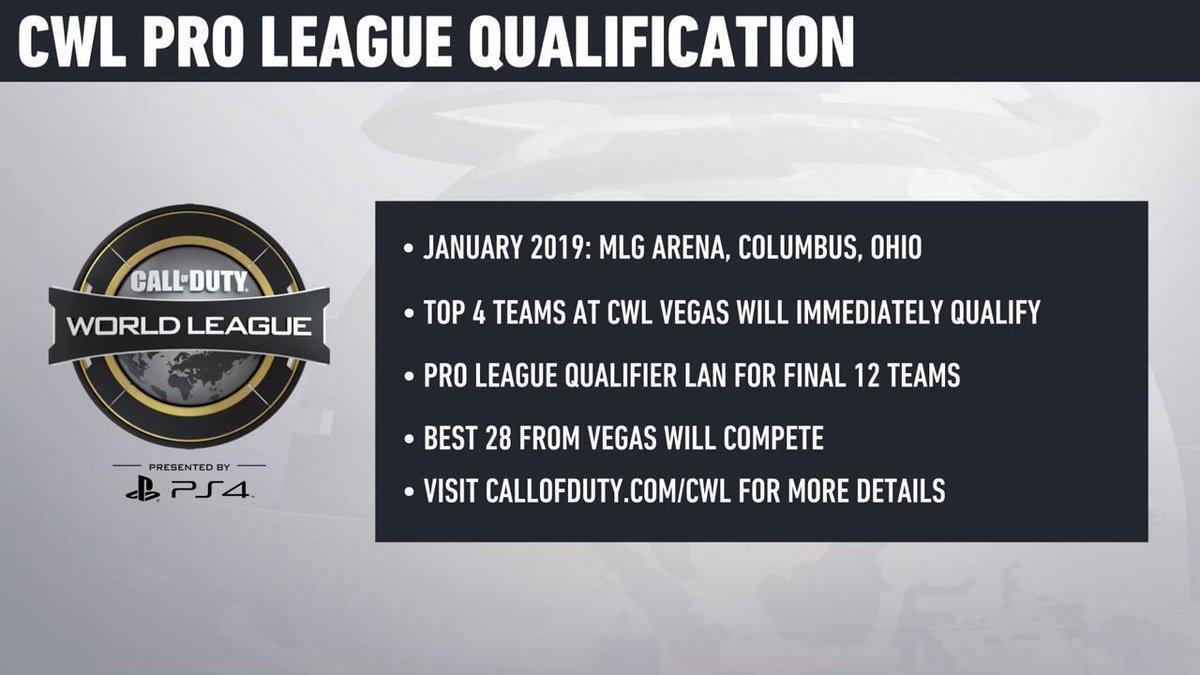 The CWL says they are “elevating the CWL Pro League Playoffs to its own dedicated event, featuring the best teams in the world competing for a prize pool and trophy.”

This event will be called the Pro League ‘Finals’, and feature alongside the amateur circuit’s playoffs, which will act as a qualifier to the 2019 CWL World Championship.

The change to 5v5 wasn’t the only major rule change as far as rosters are concerned. The region lock rule, introduced with the inception of the CWL, will no longer be in place.

This means that players from North America, Europe and APAC can all join rosters together, making international squads. 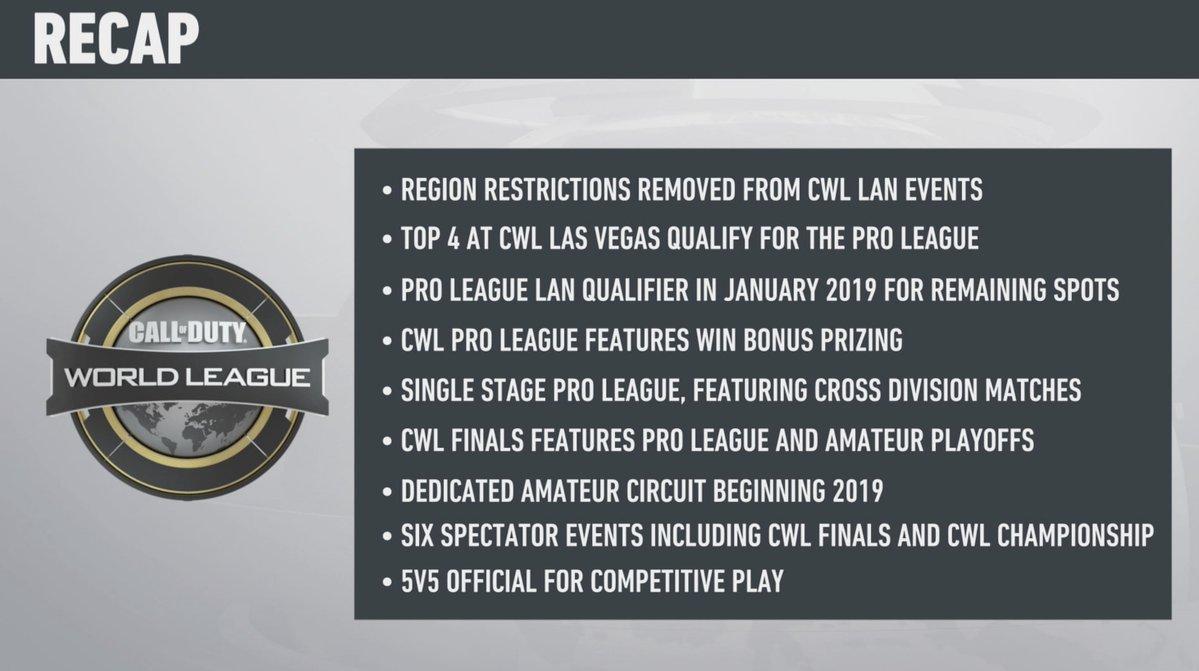