David Vonderhaar, Treyarch’s longtime Studio Design Director, has left members of the Call of Duty community scratching their heads after he posted a number of now-deleted Tweets hinting that he could be taking a step away from CoD.

His twitter has now been re-enabled, with Vonderhaar tweeting the following:

“Hi everyone. I’m good. Sorry if my tweets caused some confusion. We have talked about bad I am at Twitter!  I am going to take some time to unplug as I often do.”

For many CoD fans, Vonderhaar has been the unofficial face of Treyarch, and in particular, the highly touted Black Ops series for a number of years but that could be set to change as the 46-year-old says he was asked to ‘disconnect himself’ from the franchise.

Tweeting after the conclusion of the CWL World Championship for Black Ops 4, Vonderhaar said: “I was asked by someone I respect to disconnect my day-to-day with the Call of Duty world I was a part of. I respect that. It makes sense. Before I go… Good luck to all the Call of Duty World League esports heroes.”

Vonderhaar says someone he respects asked him to “disconnect” from CoD.
[ad name=”article2″]

This statement has sparked a great deal of speculation. Some fans, including ScottyKNG on Reddit, believe that the Tweet is simply an indication that David Vonderhaar will be separating his Call of Duty work from his personal life and Twitter persona moving forward.

“I get the impression he isn’t going to be talking COD on his personal twitter anymore,” said the Redditor in a thread about the Tweet. “Keep work and his personal life separate.”

Others have mused that it could actually be a sign that his work with Treyarch, or at least with Call of Duty, might be coming to an end and that Black Ops 4 was his last CoD title with the company. 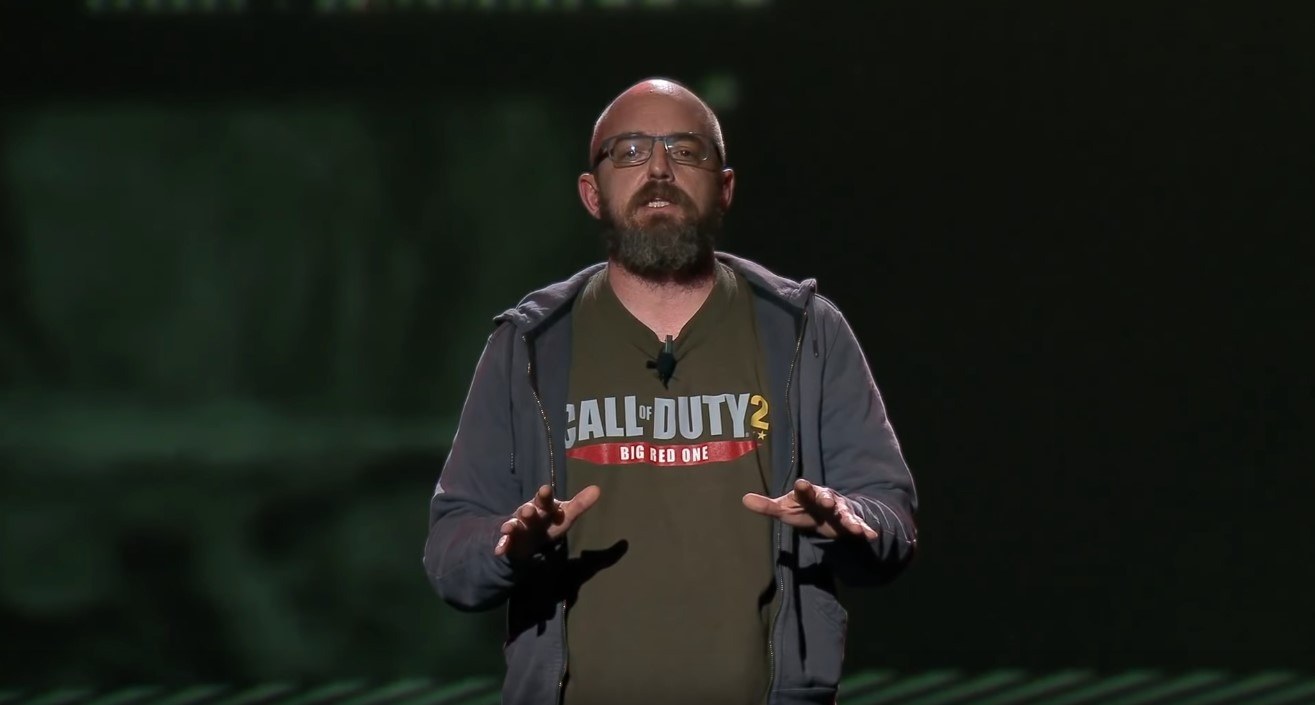 “I believe it’s one of two options,” says Against-The-Current on Reddit. ”A: Vahn is being dramatic, and him being disconnected from the Call of Duty world means his unnecessary tweets will stop. B: Treyarch asked him to step down for some [un]disclosed reason. I believe it’s this option, because of how ridiculous Treyarch has become and this would not be far fetched.”

Vonderhaar’s Tweets didn’t stop there, though. He went on to give props to Ryan ‘fwiz’ Wyatt, Hector ‘H3CZ’ Rodriguez, and Mike ‘hastr0’ Rufail in a follow-up post, stating that competitive Call of Duty would never have reached its current heights without them.

“Let’s be clear about something,” he said. “Fwiz, hastr0, H3CZ and many more. None of this exists with[out] those pioneers beating up my inbox. Good shit, guys. Be proud right now. It’s a straight-up honor to know you all.”

CharlieIntel shared yet another Tweet from Vonderhaar that was also deleted some hours later, where he again reflected on CoD’s competitive esports journey.

“We have come a long way,” he said. “I can’t help myself in this exact second. I just don’t care what it cost anymore. We did a thing together. It sucked. It was awesome. Pat yourself on the back.” 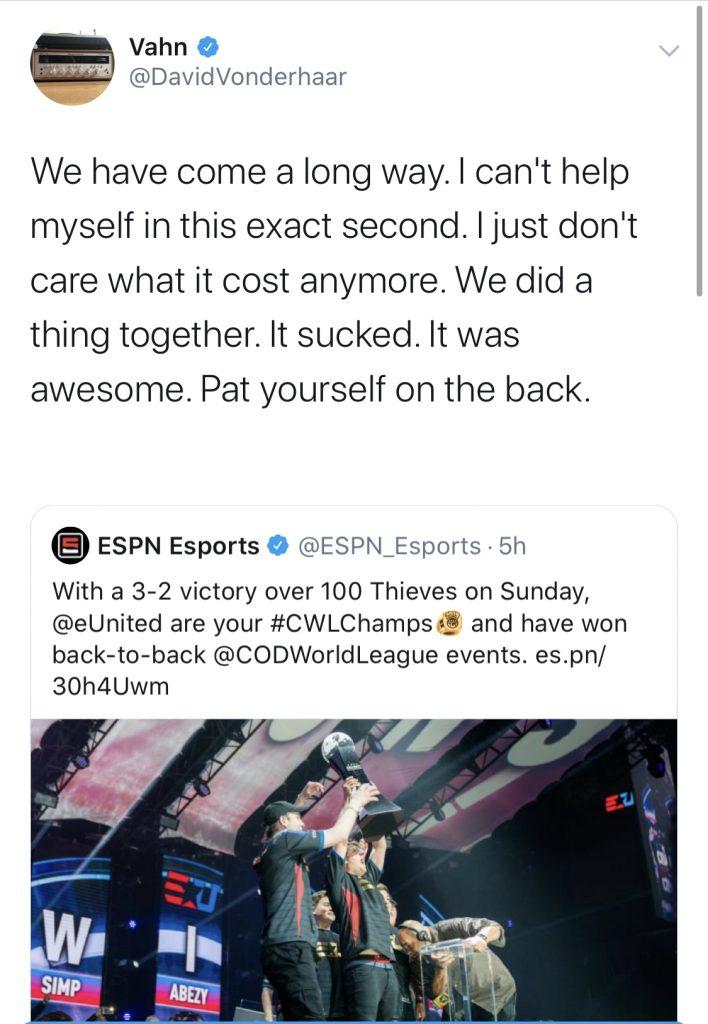 David Vonderhaar is seen by many Call of Duty esports fans and players as being instrumental in helping the scene to ‘blow up’ during the Black Ops 2 season thanks to his ‘hands-on’ and front-facing approach to competitive CoD – an approach that he carried over into Treyarch’s future titles.

The popular developer has also been heavily involved in the community management side of things for the games he helped build, posting regularly to Twitter and Reddit to respond to concerns and questions from casual fans and competitive players alike. However, he has become progressively less active on social media during Black Ops 4’s lifespan.

After some fans expressed concerns about him following his initial Tweets, Vonderhaar clarified that he is “fine” and stated: “I’m in the best place I’ve been in years.”

Hey. That's kind of you to think of me. I'm in the best place I've been in years. Sorry to alarm you!

Since the Tweets went out, David has been bombarded with support and gratefulness from Call of Duty fans and members of the competitive scene who have appreciated his straight-shooting and open approach to game development over the years.

“So many careers, lives, and friendships were made possible when you decided to take a chance on helping us advance,” said Team Envy CEO, hastr0. “Forever indebted to you, my friend.”

So many careers, lives and friendships were made possible when you decided to take a chance on helping us advance. Forever indebted to you, my friend.

VanillaGorilla on Twitter summarized the sentiments of many Call of Duty players, suggesting that the community will always view Vonderhaar as one of the most important figures in the franchise’s history.

“The COD community is a passionate one,” the Twitter user said. “Sometimes in all the wrong ways but in the end if they were ever gonna make a Mount Rushmore for Call Of Duty David Vonderhaar’s head would be on it. Black Ops 2 is what got me into COD and still is my #1 COD ever. Either way, thank you.”

The COD community is a passionate one, sometimes in all the wrong ways but in the end if they were ever gonna make a Mount Rushmore for Call Of Duty David Vonderhaar's head would be on it. Black Ops 2 is what got me into COD and still is my #1 COD ever. Either way thank you.

After a day full of mysterious Tweets, Vonderhaar signed off for the night with one final cryptic post:

“Starve the ego; feed the soul. Goodnight, and thanks for all the fish.”

Starve the ego; feed the soul.

Goodnight, and thanks for all the fish.

It hasn’t been an easy year for Treyarch. In JuneKotaku released a report on the development of Black Ops 4 where they claimed that many members of the development team were unhappy with working conditions and the direction that the game was going in. In July it was reported that veteran developer Jason Blundell had been fired from Treyarch – a report that Activision officially denied.

Call of Duty: Modern Warfare, developed by Infinity Ward, will be the next installment in the incredibly popular CoD franchise. The highly anticipated game is due to release on October 25, 2019.

Competitive Call of Duty will be moving to a franchise model for 2020, and Treyarch is not involved in the development of Modern Warfare, so many of Vonderhaar’s Tweets could well be nothing more than nostalgia about how far CoD as an esport has come in recent years.

However, the first statement does appear to suggest that he could be less involved in everything CoD related – at least publicly – moving forward. What ‘disconnecting’ from CoD on a day-to-day basis really means for the Treyarch legend remains a mystery for the time being.