The fourth day of action at the Call of Duty League Playoffs is in the books, and following the four intense matches on August 22, the Champs Winners Bracket final has been determined.

The $4.6 million CDL postseason has been a very entertaining affair thus far but there was some extra excitement in anticipation of Day 4 as it featured some high-profile matchups in the Winners Bracket.

As expected, tournament favorites Atlanta FaZe and Dallas Empire did what they had to do to secure a spot in next week’s Championship Weekend bracket and both are just one more win away from a Grand Final berth.

In the lower bracket, London Royal Ravens and OpTic Gaming LA advanced to survive for another round, while Paris Legion and Minnesota ROKKR were the day’s casualties and their respective seasons are now over. 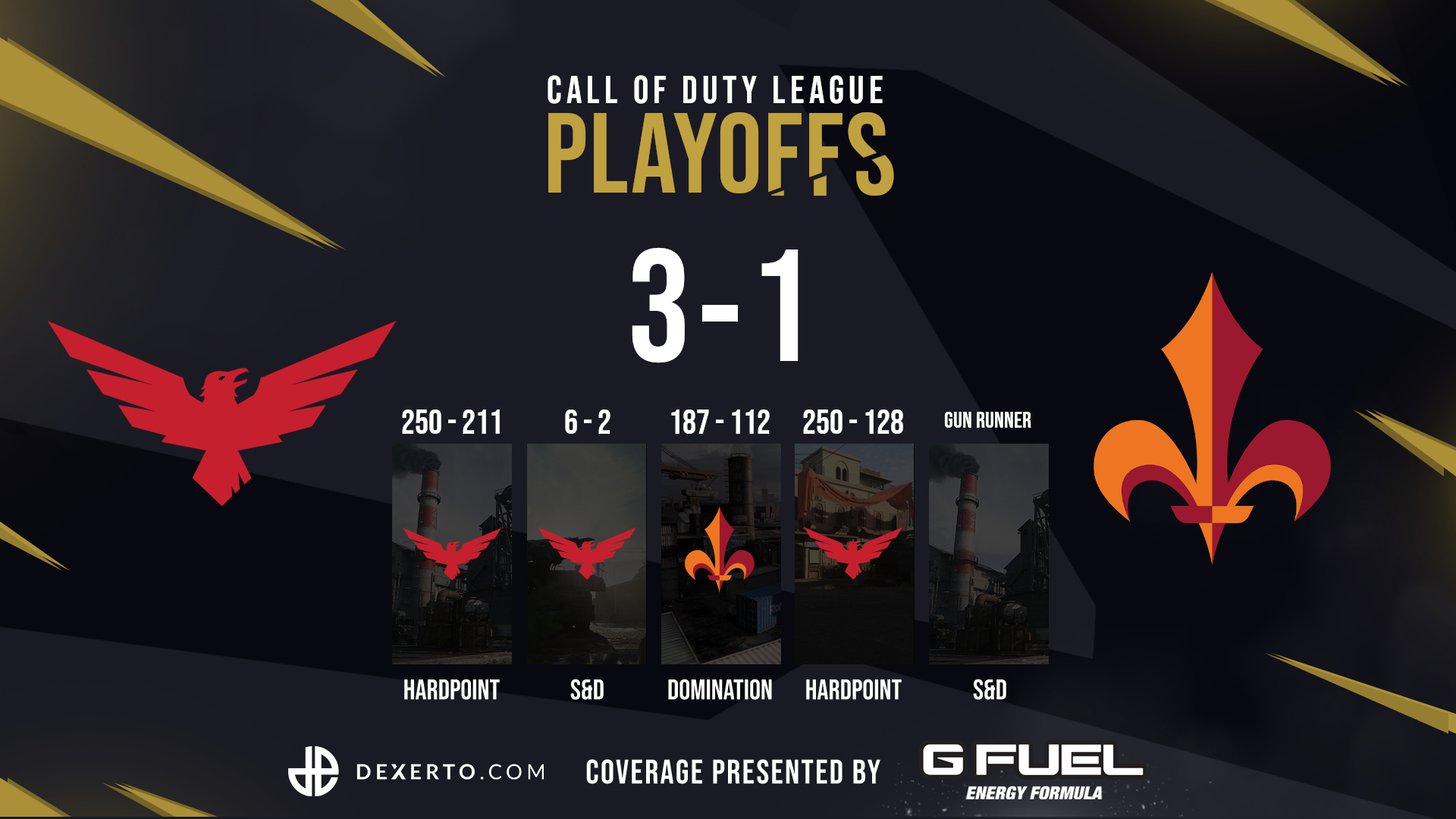 The day started in the Losers Bracket with another chapter of the Battle of Europe, as the London Royal Ravens and Paris Legion met in a meeting of the league’s lone two EU sides.

It was as convincing of a 3-1 win one could ask for; while Royal Ravens did lose the Hackney Yard Domination, which is by far their worst game mode, they proved to be too much for Legion to handle in the other three maps, especially with Seany going on a massive killstreak in the second Hardpoint.

London advance to play the Florida Mutineers in the third round of the Losers Bracket. As for Paris, they finish the tournament tied for ninth place, which amounts to a $100,000 payout. 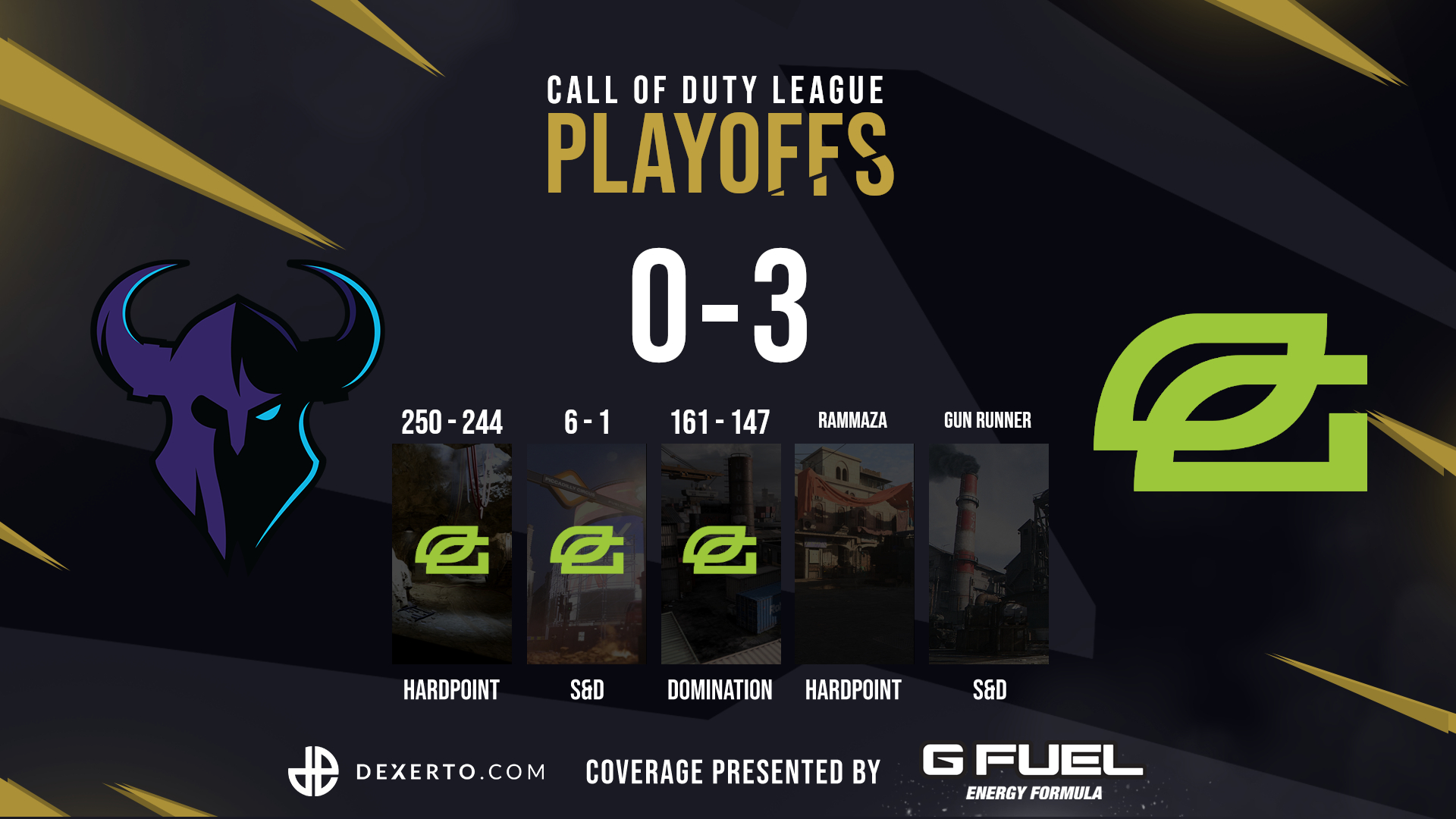 Being winless over the last three months is not where Minnesota ROKKR envisioned themselves when the CDL Playoffs started, and that losing streak hit 10 matches following their 3-0 defeat to OpTic Gaming Los Angeles.

It looked as though the ROKKR might get off to a good start before their 78-point lead crumbled at the hands of a massive OGLA comeback, who were paced by Kuavo’s inspiring 45-kill performance.

From then on, it was like clockwork for the Green Wall, who controlled both the S&D and Domination and never gave Minnesota the chance to creep back into the series. It was a revenge of sorts for OGLA, as Kuavo and Drazah took to Twitter following their win and slammed ROKKR newcomer Exceed, who had taunted them in the leadup to the Playoffs.

The win ensures OpTic’s survival for at least one more round as they will face the New York Subliners in another elimination match on Sunday. As for Minnesota, their season is now over after what had been a grueling past few months for SiLLY and co. 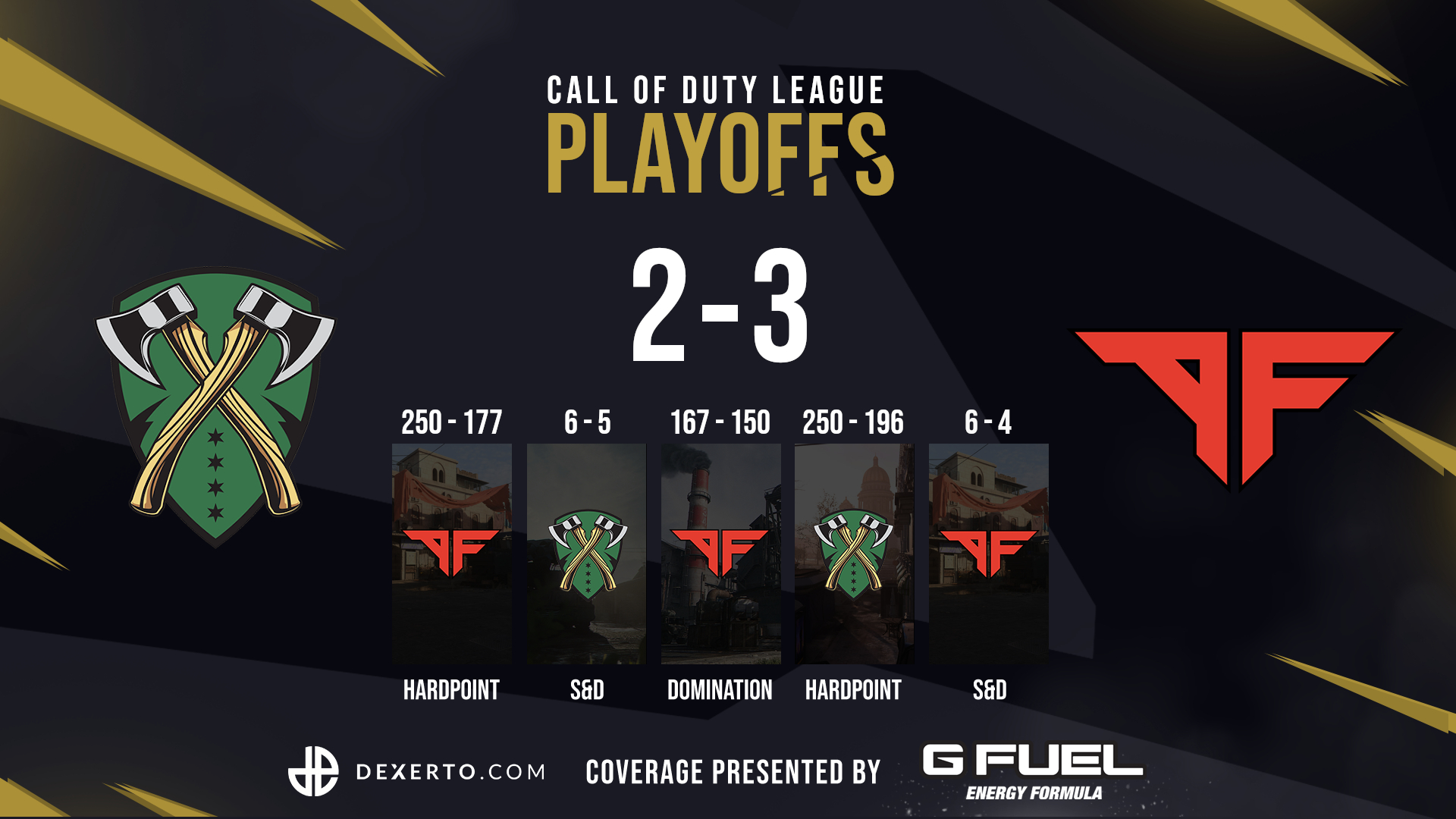 In what was easily the most highly-anticipated matchup of the day, if not the whole Playoffs, Atlanta FaZe were able to exact revenge against Chicago Huntsmen for handing them that dominant 3-0 loss at the New York Home Series – their first and only matchup in the regular season.

Unlike their first meeting, this was a back-and-forth affair, one which went all the way down to the wire as FaZe won the final Rammaza Search & Destroy, 6-4, to clinch the series.

They knock Chicago @Huntsmen down to the elimination bracket after the epic 3-2 series win!#EZAF | #CDLPlayoffs | #CDL2020 pic.twitter.com/oKXigxquy1

There were highlight plays from both sides in that final map; Majormaniak has a huge three-kill spree in the ninth round that included a nasty turn-on, while FormaL helped his team’s cause early on by going big in a 2v4 situation.

With the win, Atlanta is now in the Winners Bracket Final, which means they’ve guaranteed themselves at least a top-three placement and a $600,000 payout. As for Huntsmen, their dreams of CDL glory are not over yet, as they’ll get a second chance in the Losers Bracket. 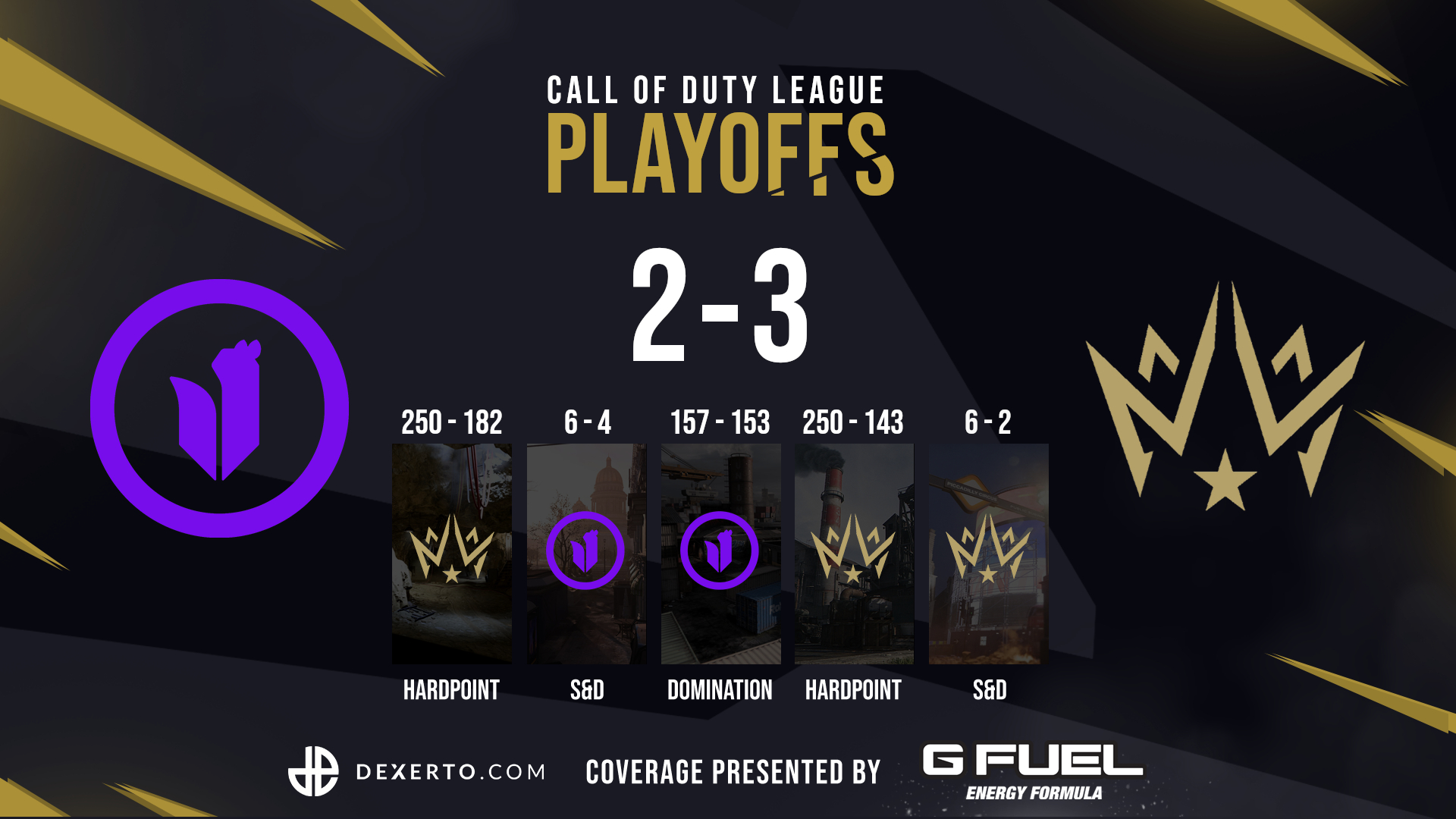 Seeing as how Dallas Empire and Toronto Ultra were two of the league’s hottest teams coming into the Playoffs, it’s no surprise that their match went the distance.

In fact, it looked like Ultra might add to their league-leading six-match winning streak after taking a 2-1 lead, but Empire flexed their championship muscles and dominated the final two maps, thanks to some stellar plays from iLLeY in the Gun Runner Hardpoint.

Now, Toronto will have to start a new winning streak in the Losers Bracket if they’re to lift the CDL Championship trophy next weekend. Dallas, on the other hand, are already in the Champs bracket and have guaranteed themselves a top-three placement and a whopping $600,000!

They defeat @TorontoUltra 3-2 to punch their ticket to the Winners Bracket Final next week! Ultra will play tomorrow in the elimination bracket.#BuildAnEmpire | #CDLPlayoffs | #CDL2020 pic.twitter.com/r7aDhouaX7

Looking ahead to Day 5 of CDL Playoffs

The fifth day of the 2020 CDL postseason will also be the final one for the first portion of the tournament, as following the action on August 23, things will shift to the Championship Weekend next week.

All four matches will be in the Losers Bracket, starting off with the New York Subliners taking on London Royal Ravens followed by Florida Mutineers facing OpTic Gaming LA. The winners will then advance to the fourth round and face the Toronto Ultra and Chicago Huntsmen, respectively.

The two teams that make it out alive from Day 5 will earn a spot in the fifth round, which takes place next weekend and comes with a guaranteed top-four finish and a minimum $450,000 share of the prize pool. 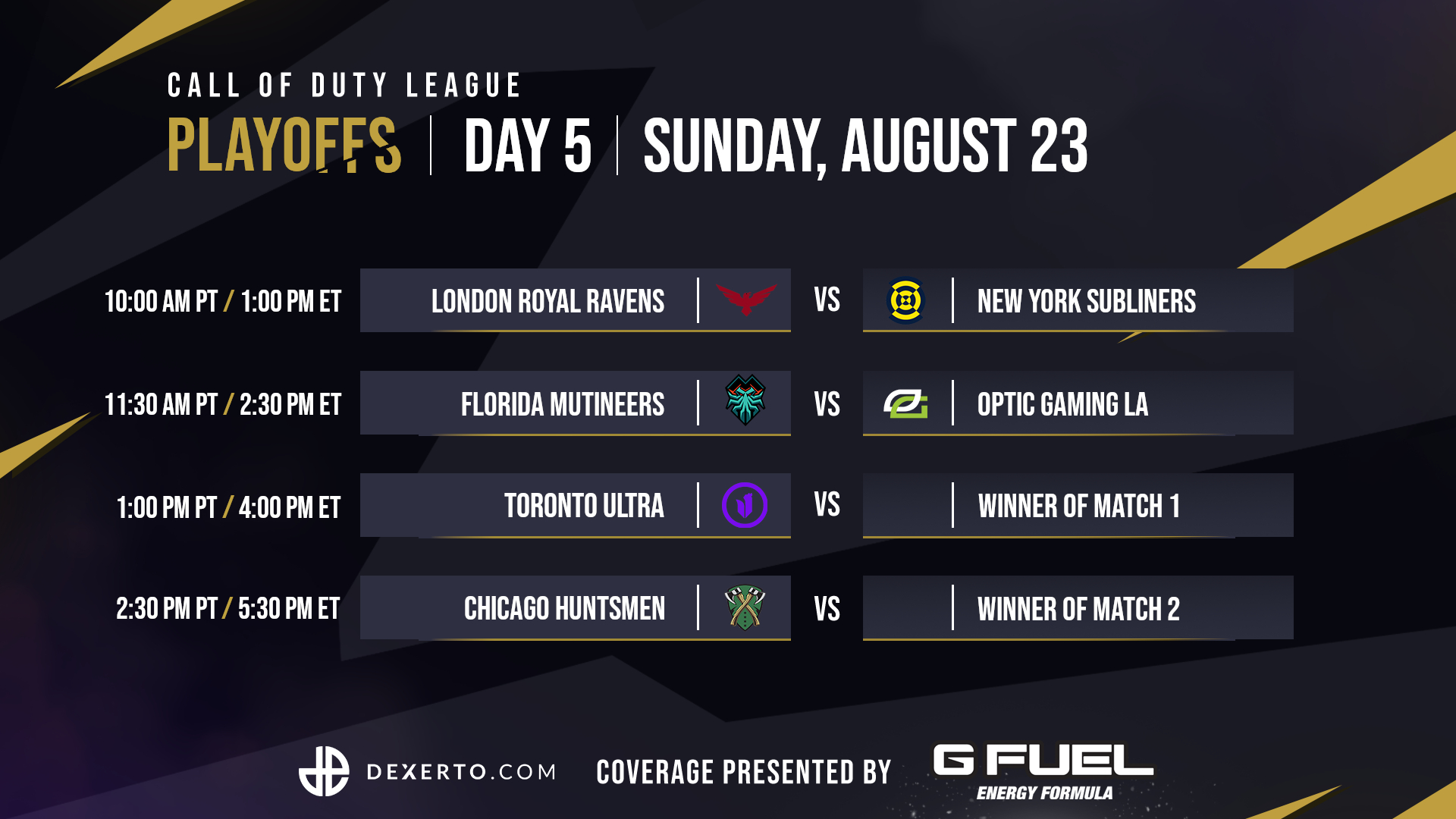 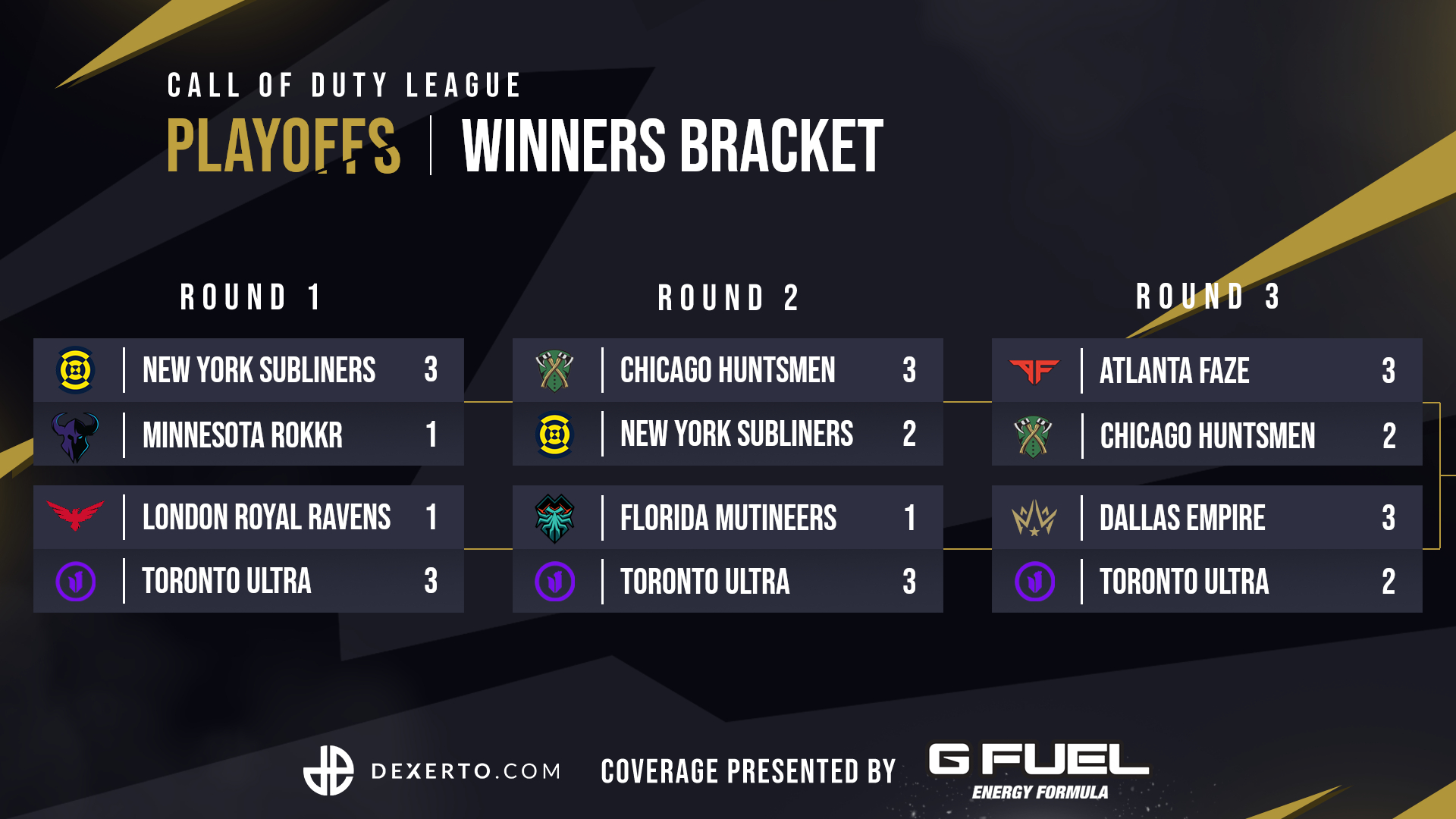 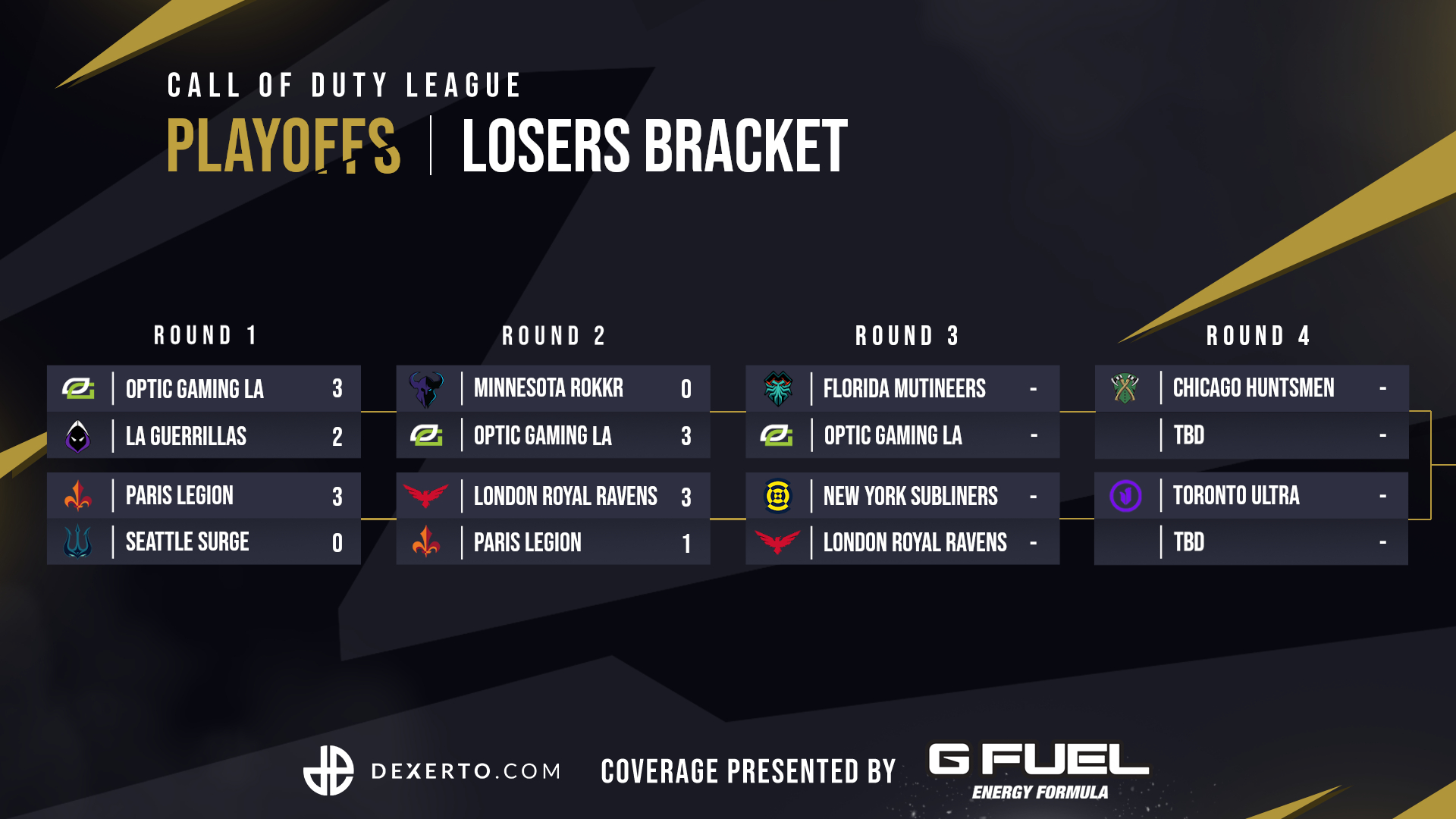 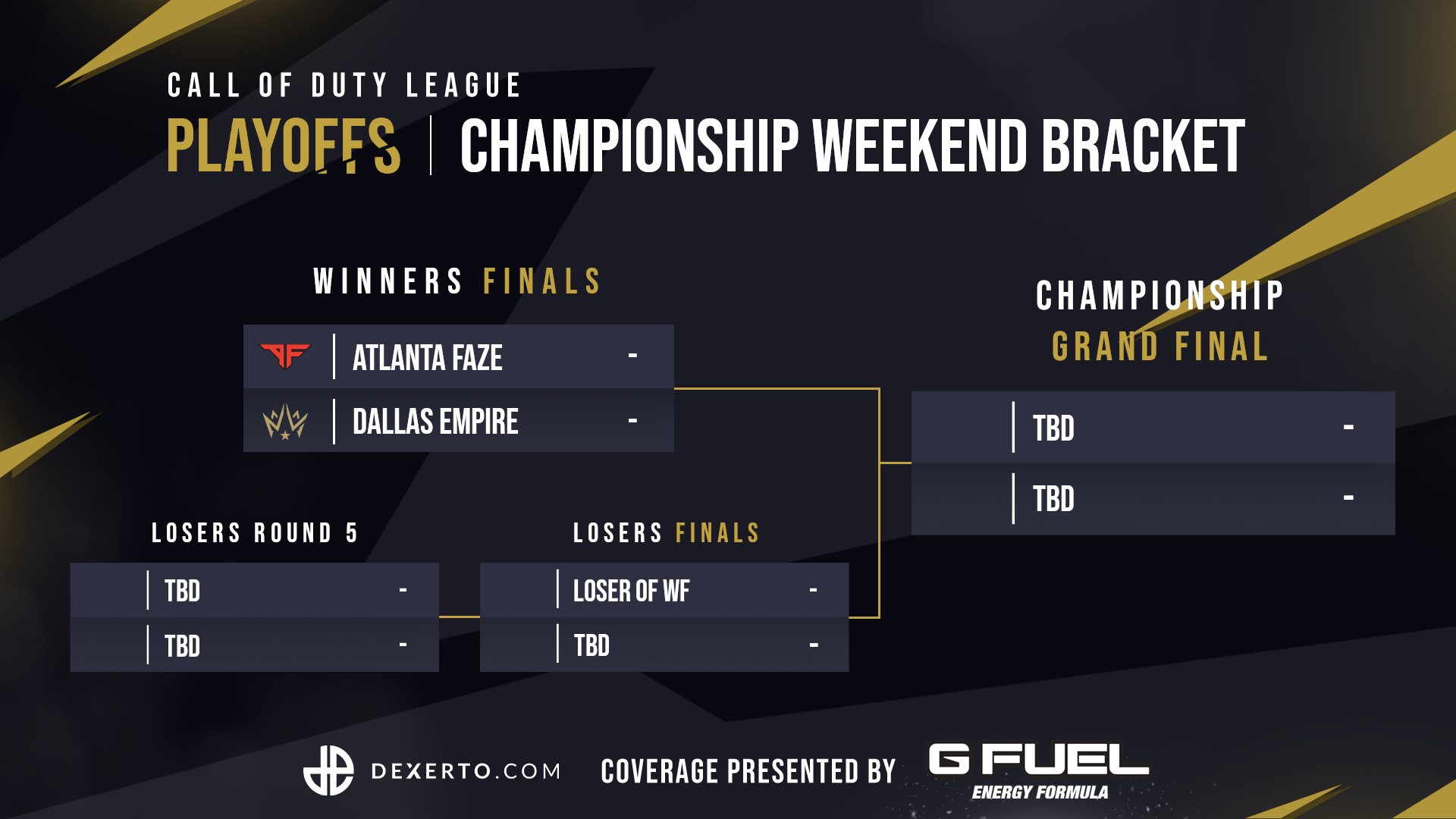 You can keep up with all of the Call of Duty action and watch these matches live via our CDL Playoffs & Championship Weekend hub, which includes live streams, the full schedule, updated scores, brackets, and more.