The first day of the Call of Duty League Championship Weekend has now wrapped up, which means that there are only two teams left who will battle for the coveted CDL trophy on Sunday.

After over half a year of intense, competitive Call of Duty action, the CDL’s inaugural campaign has boiled down to a single match that will decide who the league’s first-ever champions will be.

Dallas Empire and Atlanta FaZe will be the final two sides standing when the Championship Weekend resumes on August 30 for the best-of-nine Grand Final.

As for the day one casualties, it was the London Royal Ravens and Chicago Huntsmen who failed to do what it takes to advance, falling in the Losers Bracket fifth round and final, respectively. 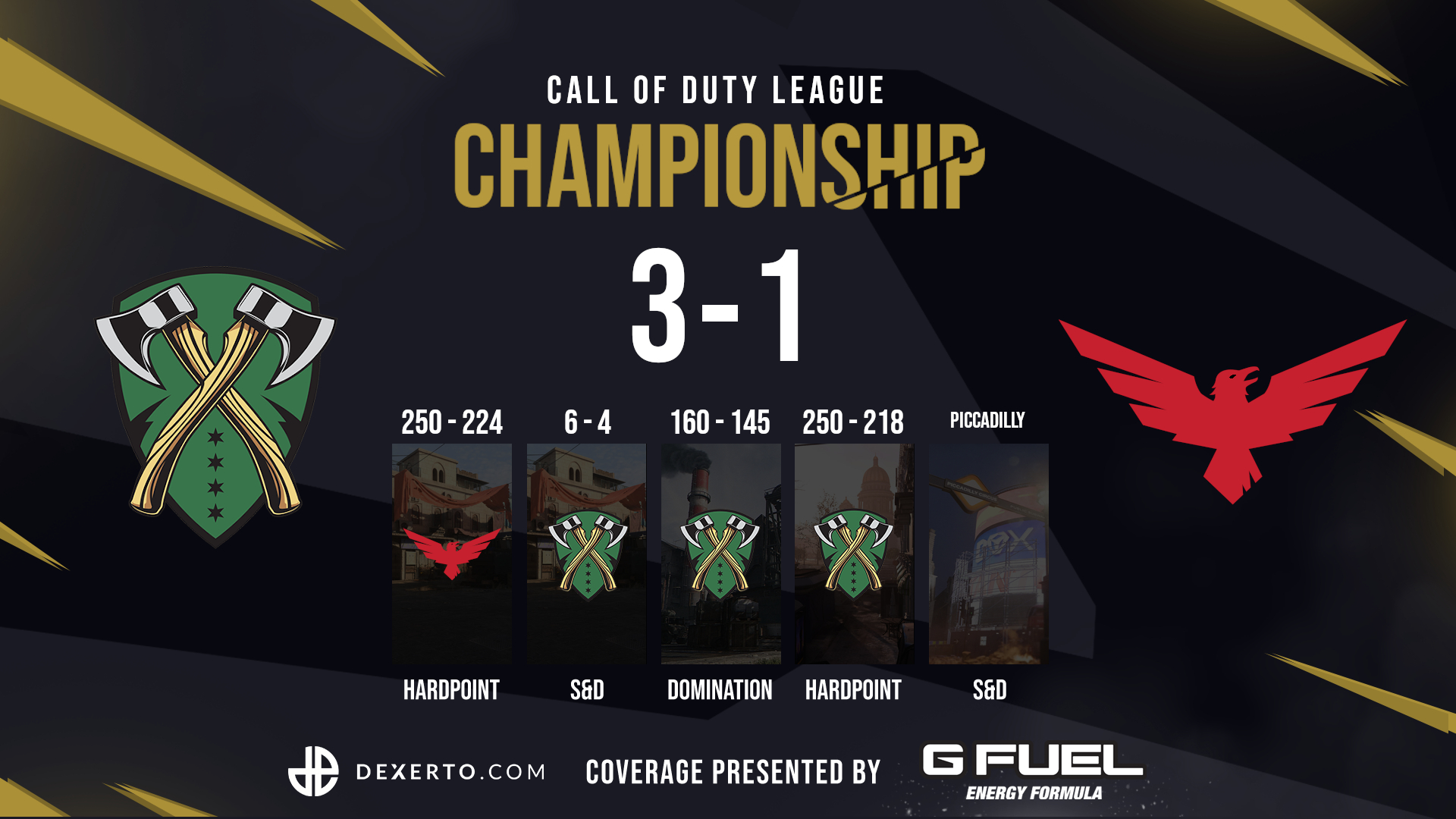 The day started off in the Losers Bracket as Chicago Huntsmen and London Royal Ravens faced elimination straightaway in their fifth-round matchup.

It looks as though there might be a major upset brewing after Royal Ravens took an early 1-0 lead, but three straight maps from Huntsmen clinched the series for the favorites.

MVP-finalist Envoy was at his usual best, hitting shots that many would consider impossible, while Prestinni’s bold decision to pull out a sniper rifle on the Rammaza Search & Destroy proved to be a crucial tactic.

The result was the end of the line for London and their 2020 season. Despite an up-and-down campaign, there’s no doubt that qualifying for the final four was a huge achievement as they finished the CDL postseason in fourth place with a $450,000 share of the prize pool. 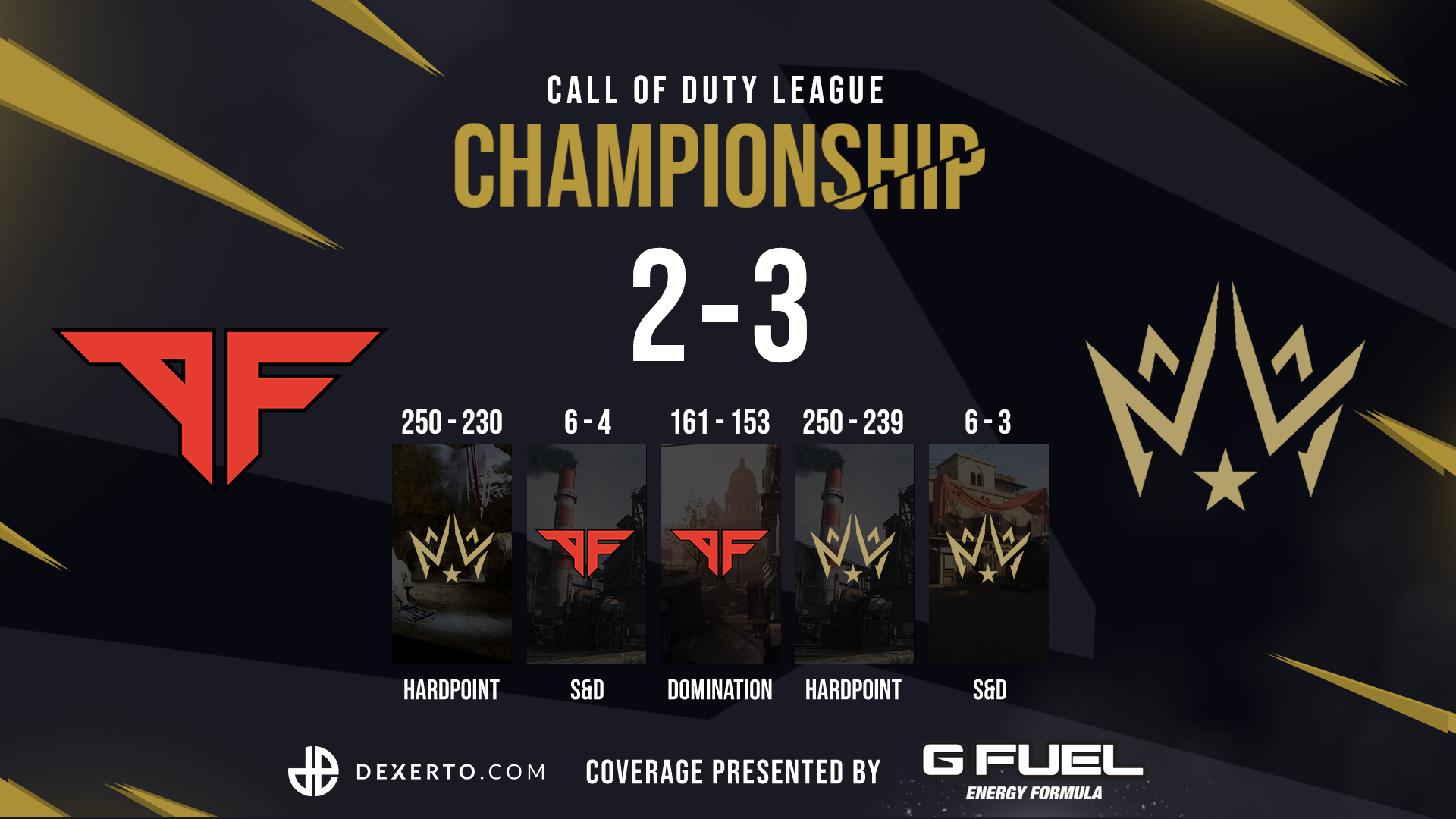 There are always high expectations when two teams of this caliber match up in the semifinals of a $4.6 million tournament, and this latest chapter of the Atlanta FaZe vs Dallas Empire rivalry didn’t disappoint.

After they traded wins on the first two maps, Empire missed a golden opportunity to grab a 2-1 lead after letting FaZe go on a big comeback to win the game three Domination on St. Petrograd. But they made amends with some crucial plays late in the subsequent Gun Runner Hardpoint which led to a last-gasp victory that forced the fifth map.

? Game 5 alert!@ATLFaZe and @DallasEmpire are all tied up heading into one final S&D on Rammaza!

Winner advances to the Grand Final and is guaranteed at least $900,000!

The final S&D on Rammaza turned into a lesson of what not do if you’re the Atlanta FaZe, as their error-riddled performance led to multiple round losses in which they had at least a two-man advantage.

Clayster, who is looking for back-to-back World Championships and his third ring, came up with some huge kills that really opened up opportunities for Empire to clutch out rounds they had no business winning.

Ultimately, and perhaps poetically, it was Dallas’ regular-season MVP, Shotzzy, who won the final 1v1 vs Priestahh to clinch the series and send his team to the first-ever CDL Championship Grand Final.

EMPIRE MOVE ON!@DallasEmpire get the 3-2 win over @ATLFaZe and advance to the Grand Final!#EZAF will face Huntsmen in the Losers Bracket final. 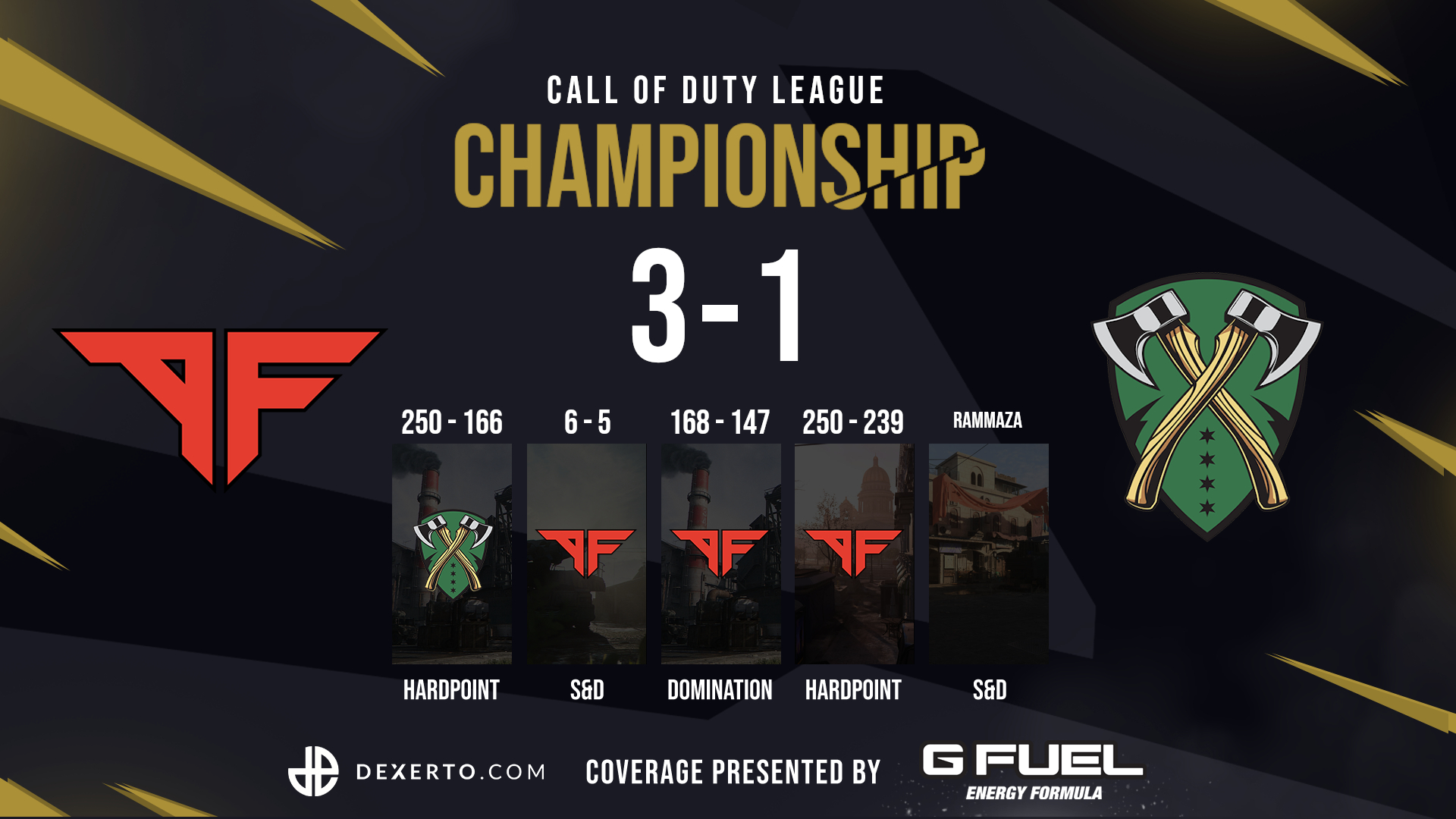 It’s only fitting that the CDL postseason featured two different meetings between the Atlanta FaZe and Chicago Huntsment after the highly-anticipated rivalry matchup came into fruition only once during the entire regular season.

But just as they did in the fourth round of the Winners Bracket, FaZe took care of business once more in the Losers Bracket final, winning 3-1 in a highly-entertaining affair that was a lot closer than the overall scoreline might suggest.

A crucial turning point in the series came in the S&D on Arklov Peak, which saw Atlanta survive several rounds where they had numeric disadvantages only to clutch up in round 11 to tie up the series at one map apiece.

[#CDLChamps | Losers Final]@ATLFaZe clutch up in round 11 and tie up the series 1-1 vs @Huntsmen!

After taking control of the second half of Gun Runner Domination and taking a 2-1 lead in the series, the intensity came to a peak in the final moments of the St. Petrograd Hardpoint, which saw the boys in red overcome a big deficit late to steal victory from the jaws of defeat.

DOWN GO HUNTSMEN!@ATLFaZe take the series vs Chicago 3-1 and advance to the Grand Final!#Huntsmen have been eliminated and finish in third place.https://t.co/H1hNrAzKaK pic.twitter.com/b4FhuhX8gt

It was heartbreak for Huntsmen, whose season of high expectations fell short of its ultimate goal. While their players and fans will both be disappointed, a third-place finish is still very elite, along with the whopping $600,000 share of the prize pool.

Looking ahead to the CDL Championship Grand Final 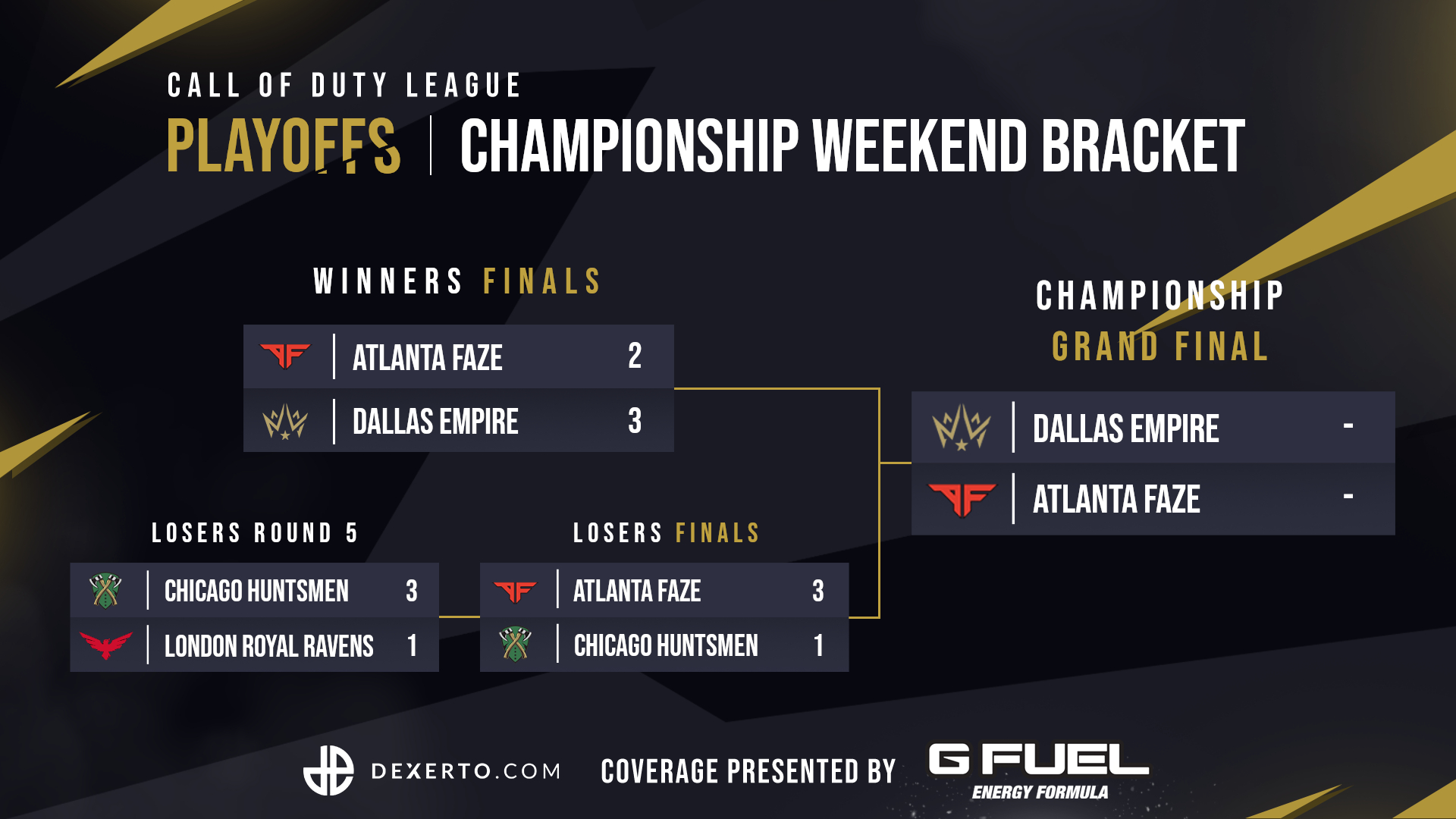 It will be the Dallas Empire and Atlanta FaZe in the CDL Championship Weekend Grand Final on Sunday, August 30, starting at 1 PM PT / 4 PM ET.

The series will be a best-of-nine with Empire starting up 1-0 on the virtue of them coming out of the Winners Bracket. This means that they’ll only need to win four maps while FaZe will have to take five if they’re to be crowned champions.

Here is the order of the game modes that will be played:

As far as their meetings this season go, the two have faced each other seven times this season – six in the regular season and once in the Playoffs. Atlanta won five of those regular-season matchups, but their lone loss was a big one – in the Grand Finals of the Chicago Home Series.

You can watch that match and get all the information you need about this series via our CDL Championship Weekend hub.