For old school Call of Duty players who prefer their gameplay to be more gunfights and less specialist abilities, a Barebones playlist in Black Ops 4 would resolve all your complaints.

They perform similarly to kill streaks, except they are not earned by successive kills without dying, which frustrates sections of the Call of Duty player base who feel specialist abilities/weapons are too easy to get and use.

However, there could be a simple alternative provided, if Treyarch took inspiration from their 2010 Call of Duty: Black Ops.

Fans of the original Black Ops may remember there was a unique playlist called ‘Barebones Pro’. It also featured in Modern Warfare 2, and removed all kill streaks from the mode. In Black Ops, Barebones Pro removed kill streaks, perks, camos, and attachments.

Reddit user u/Logjamz suggested a reimagination of Barebones for Black Ops 4, removing specialists and scorestreaks, while also giving dedicated character models to each team, so that friendlies and enemies are easily discernible. 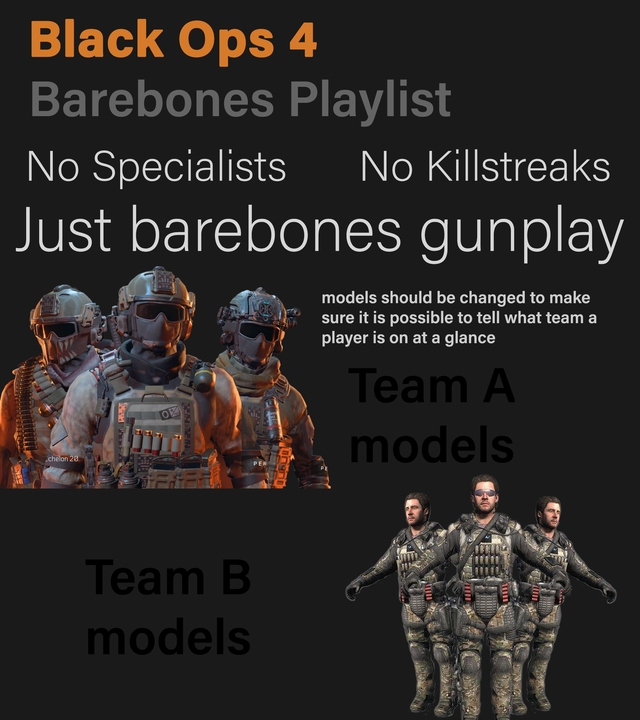 This playlist would reduce Black Ops to pure gun on gun action, although the concept doesn’t go as far as to remove perks, or gear items like Armor and Stim Shot.

Unlike older Call of Duty titles, Black Ops 4 uses the pick 10 class system (first introduced in Black Ops 2), meaning that removing perks/gear would give players too many class slots to use on attachments or equipment.

Regardless, it is an intriguing concept, and one that would certainly excite those who don’t enjoy the impact of specialists on the traditional gun-on-gun action of CoD.

Treyarch has said that they have a lot of plans for new content coming post launch, and have already added a new game playlist, with fan favorite party mode ‘Gun Game’ added on October 30 – although only for a limited time.