There was plenty of drama to go around the competitive Call of Duty community on March 20, and the latest clash on Twitter involved Splyce’s Lamar ‘Accuracy’ Abedi and Midnight Esports’ Christopher ‘Parasite’ Duarte.

With the community still reeling from the verbal lashing that eUnited’s Jordan ‘JKap’ Kaplan had given James ‘Clayster’ Eubanks on Twitter, Accuracy decided join in on the fun, sending a malicious tweet out at Parasite: “Keep my name out of your mouth you shit can.”

After Parasite spammed a bunch of question marks to express his confusion at the attack, Accuracy came back with an even tougher response.

“You throw shade on stream and are confused as to why I’m confronting you and then wonder why no one fucks with you,” he tweeted. “Win more than two fucking maps at the tournament before you come back talking crazy about any other player.” 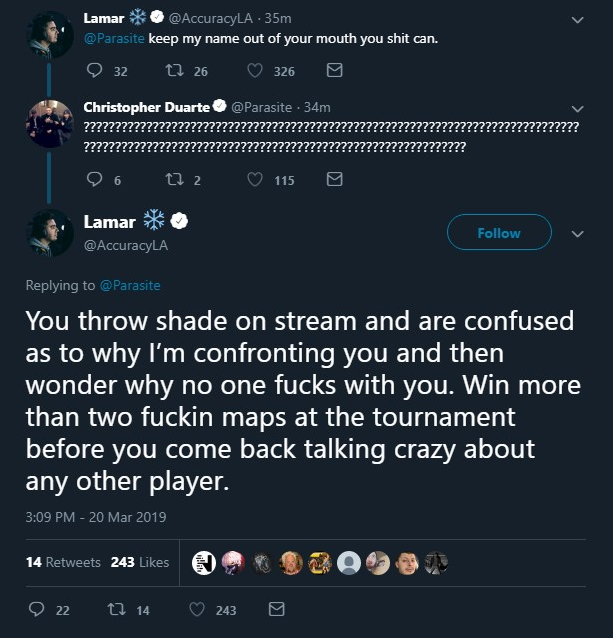 While the community was seemingly as confused as Parasite was at what appeared to be a barrage of insults coming out of nowhere, it quickly became apparent the Parasite had talked badly of Accuracy and other players live on his stream.

In a clip taken from his stream, Parasite can be heard saying that players like Accuracy, Red Reserve’s Rated, and UYU’s Parzelion were not as good as their stats would suggest, to put it in mild terms.

“The high K/D, low score per minute, basically those are the guys that don’t do anything for their team, just L-trigger and hope they do things,” he said. “AKA the slugs, the turtles, the bots, the guys that I absolutely fry. People like Parzelion, Rated, Accuracy.”

With the situation a lot more clarified, Parasite and Accuracy, and later Rated, engaged in a war of words, sending insults flying at each other on Twitter.

Accuracy and Rated were trying to make the point that Parasite should not be making such comments considering his recent lack of results, pointing out Midnight’s devastatingly poor performance at CWL Fort Worth.

Meanwhile, Parasite was essentially saying that these players were not nearly contributing as much as they teammates, and hence their stats and accomplishments are not indicative of their true skill level. 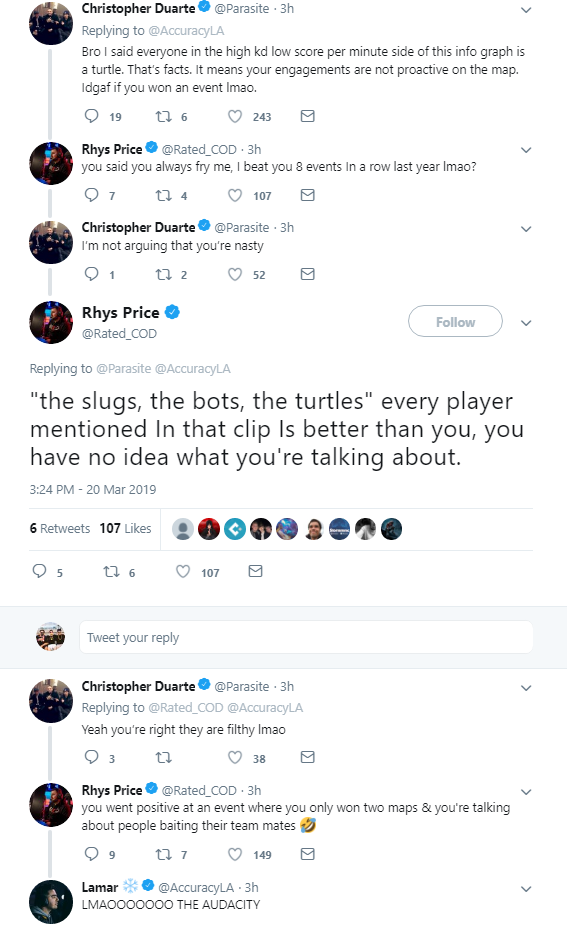 While the war of words seemed to have ended between the three pro players, it’s unlikely that this drama will end here, especially since Splyce and Midnight are set to square off in the CWL Pro League on April 1.