Here are the teams for the Ghosts match:

*Update: MBoZe’s team has been changed, Killa and Bullseye are being replaced by TJHaLy and Attach.

**Update: Rallied’s team has changed, Scump will be replaced by Decemate.

As announced by OpTic Hitch, the rules will be a best of three Search and Destroy, with the first to 12 rounds winning a map.

Players will be limited on what guns they can use and can not have two of the same weapons on one team. The guns are as follows:

OpTic MBoZe announced the rosters on his Twitter account and some replies were not kind to his team’s chances. 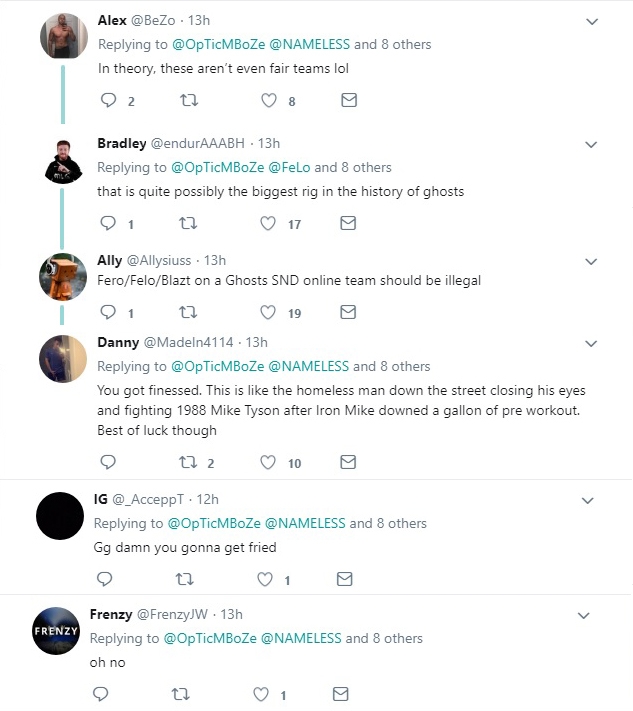 Fero was a match away from leading Team Kaliber to being CoD Champions and Felo helped eUnited on a deep run as well.

Scump may not have had a great year by his standards, but he is still known as one of the top players in the game. Blazt was on the compLexity roster that outperformed expectations in Stage 2 of the Pro League.

Saints is the only active Pro League player on MBoze’s squad, though NAMELESS participated in Stage 1 before retiring. NAMELESS finished second at the Ghosts World Championship in 2014.

MBoZe was on the OpTic team that placed third at the Ghosts Championship.

Killa is eligible to become a Pro League player next year since his suspension was only for the remainder of the WW2 season.