The RAM-7 assault rifle is one of the newest weapons in Call of Duty: Modern Warfare Season 1, and we’ve put together the top five best loadouts and attachment combinations for several different play-styles.

The December 3 release of Season 1 in Modern Warfare was the start of the most significant post-launch content drop in Call of Duty history, introducing several new maps, modes, a Battle Pass, and two new weapons – the RAM-7 and Holger-26.

The RAM-7 is officially described in-game as a “fully automatic bullpup assault rifle with a compact design that lends itself to close-quarters engagements.”

The weapon is free to everyone on all platforms, but players do need to grind a bit before unlocking it, as it’s available only after Tier 31 of the Season 1 Battle Pass is reached. Or, of course, there’s always the option of purchasing Tiers to unlock it right away.

For those who have already unlocked it, or are close to doing so, we’ve built some great classes that you can use for a variety of play-styles, including run-and-gun, slower and long-range, balanced for objective modes, stealthy, and Overkill.

The best fast-paced SMG-style build for the RAM-7 in Modern Warfare.

Running and gunning isn’t exactly the easiest play-style to adopt in Modern Warfare, especially with an assault Rifle. However, the RAM-7 has a combination of attachments that essentially turn it into an SMG, which helps with being aggressive.

Mobility is paramount with this kind of style, so it’s been maximized with this build, at the expense of Range and Control, which aren’t necessary if you plan to fly around the map.

Double Time is the perfect Perk 1 for this class, while Stim will help you heal quicker than average so you can get back in action faster. As for the Field Upgrade, Dead Silence is the right choice because it offers a speed boost in addition to silencing footsteps. However, Tactical Insertion isn’t a bad option either as it’ll all you to spawn closer to where the enemies are. 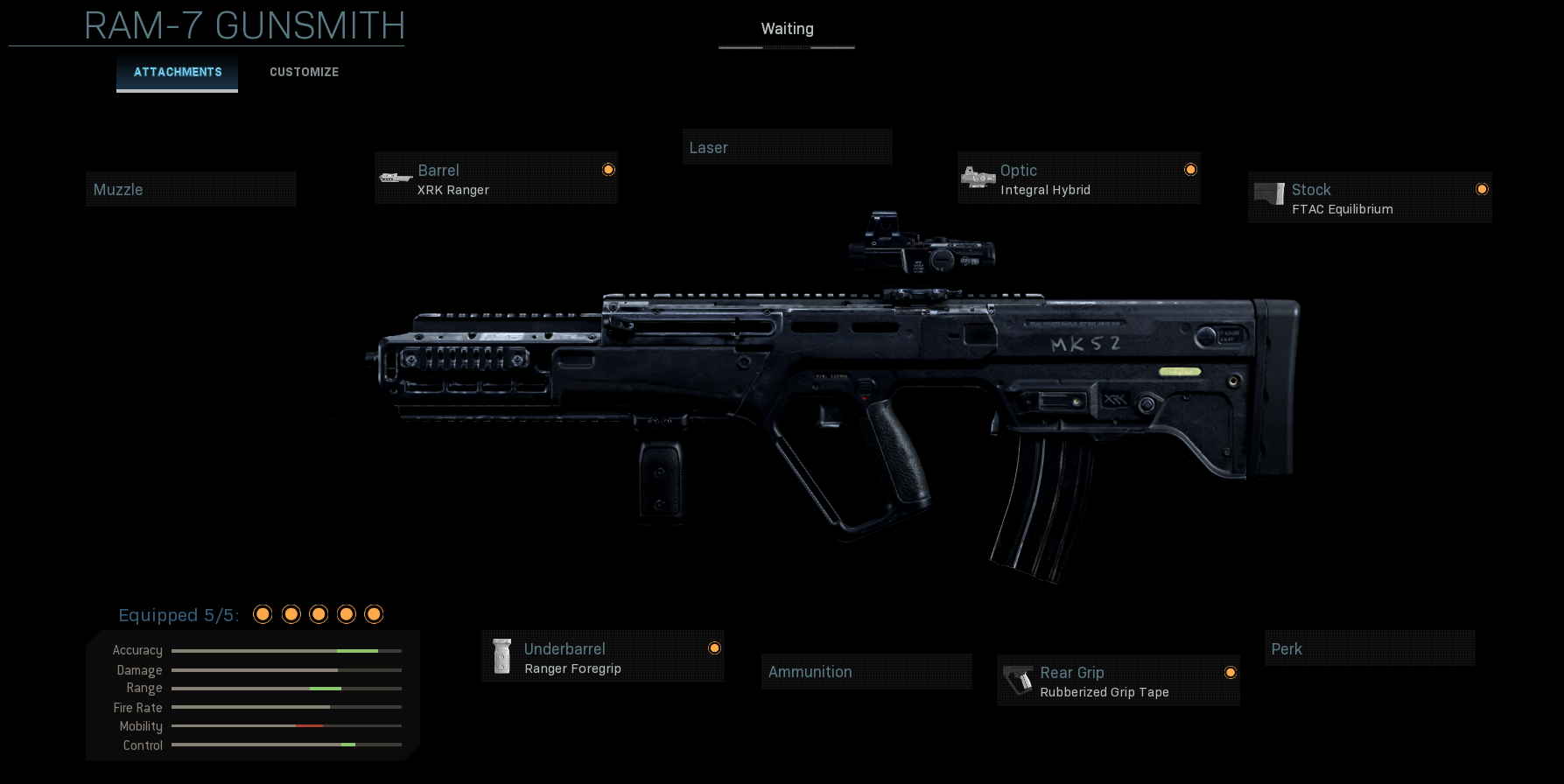 The best slow and longer-range build for the RAM-7 in Modern Warfare.

For those who’d much rather sit back, play slow, and attack enemies long-range, this class is built for you. It’s very much the opposite of the previous one – Accuracy, Range, and Control have been given massive boosts, all at the expense of Mobility, which isn’t needed.

The Integral Hybrid scope is ideal for this kind of setup because it gives you both a standard scope for regular gunfights and a zoomed-in scope for better accuracy at a more extended range.

Since players will more than likely be aware of your position, E.O.D. ensures you can’t be killed with a single explosive; High Alert will notify you if you’re being aimed at from a different area, and Tune Up will let you get Stopping Power Rounds faster.

You can use a Claymore to protect yourself from any weak-side pushes, and if things become too messy, you can always pull out your Smoke Grenade to create an opportunity to escape.

The best-balanced build for the RAM-7 in Modern Warfare.

As far as attachments go, this is probably the most balanced that the RAM-7 can be set up. Accuracy, Range, Mobility, and Control are all boosted, some more than others, and there are no stats that are in the red.

This weapon build can be used in pretty much any class, but the one we have here is built to excel in objective-based game modes. The JOKR Launcher might not be something most players carry as a secondary, but it can provide very effective countermeasures against enemy kill-streaks.

If you’re one to always jump into the objective head-on, then E.O.D, Pointman, and Trophy System are the way to go. However, if you want flank around the objective and catch enemy teams off-guard, Ghost, and Tactical Insertion might be the play here.

The best stealthy build for the RAM-7 in Modern Warfare.

Sometimes players want to play faster-paced but don’t have the gun-skill to accommodate it. That’s where this stealth class comes into play. Much like the previous build, this RAM-7 setup is very balanced, and it also has the bonus of bullet suppression, so it’s harder for enemies to track where you’re shooting from.

Mobility is essential for a play-style like this since you don’t want to stay in one place for too long, so Double Time is the ideal Perk 1. Ghost will help you stay undetected by UAVs while Spotter, the Perk 3, will allow you to avoid any Claymores or other lethal traps opponents may have hidden.

The best Overkill build for the RAM-7 in Modern Warfare.

Overkill has always been a great Perk in Call of Duty, even more so in Modern Warfare. Since there is no pick-10 class system in this game, players can carry two fully-maxed out primary weapons in a single class.

The key to a good Overkill class with the RAM-7 is first to decide which build of the gun you want to go with – the SMG-style, the one that maximizes long-range potential, or the balanced one.

Once you choose, you then have to pair it with another weapon that has the opposite primary function. Meaning, if you go with the run-and-gun RAM-7, you should pair it with a longer-range weapon, like a Sniper Rifle or Marksman Rifle.

However, if you choose to go with a longer-range RAM-7 build, then you would do well to pair it with an SMG that shreds at close range, like the MP7 pictured above. In either case, the rest of the class, in terms of Perks 2 and 3, Lethal, Tactical, and Field Upgrade is up to you, although going with Amped will help speed up weapon swapping. 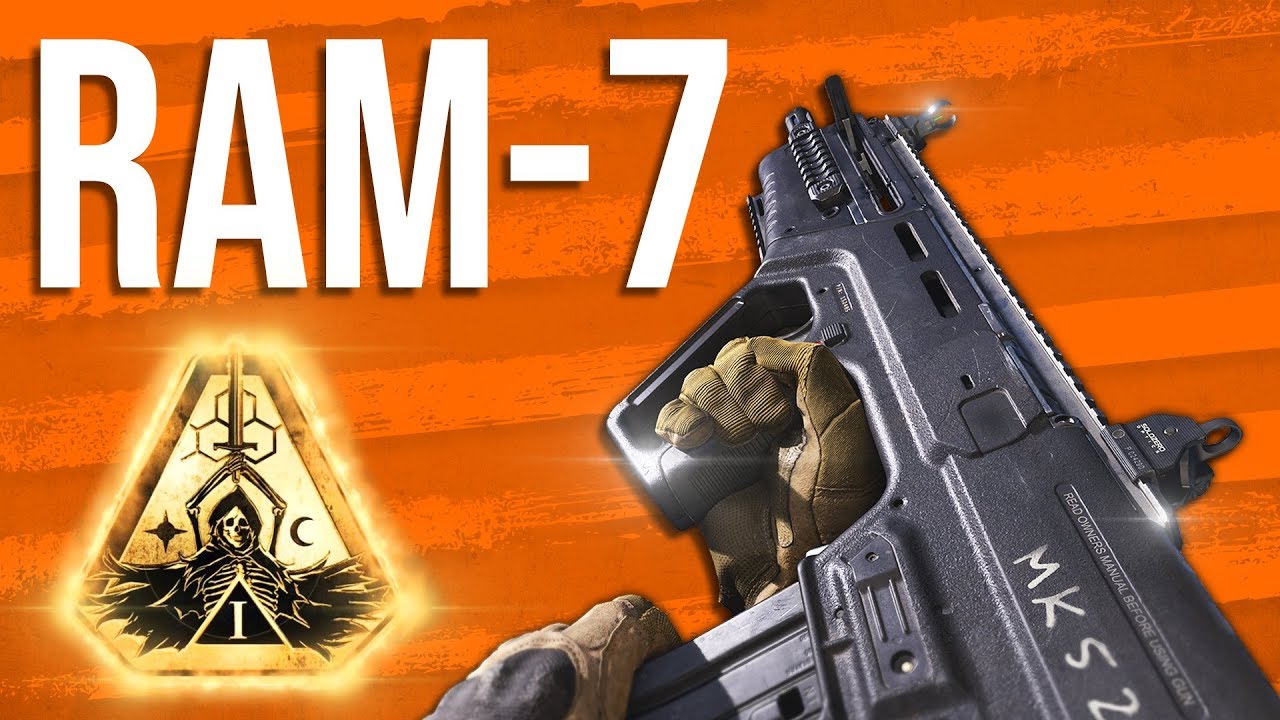 The RAM-7 can be a powerful weapon when fitted with the right attachments.

There you have it – the five best classes and attachment setups for the new RAM-7 assault rifle. Now, load back into the game, build some of these in multiplayer, and let us know what you think!

Also, make sure to check out the other guides we’ve done for Modern Warfare: