The MP7 is a strong and effective weapon in Warzone that’s capable of dominating opponents at short to medium range. However, if you want to come out on top in every gunfight, it’s key you run the correct loadout that fits your playstyle.

As is the case seemingly every Call of Duty title, SMGs play a prominent role in Warzone, with there being several viable options from which to choose from.

One of the best SMGs, and weapons overall,  the MP7 is a compact submachine gun that has a high fire rate, great control, and high agility, making it devastating in close-quarter engagements.

Despite this, the versatile weapon can be kitted out with a variety of attachments depending on your playstyle and how you want to use the gun.

Each of these setups has its own unique set of attachments, secondary weapon, perks, lethals, and tacticals, making them specifically built for each type of gameplay. Keep in mind that these classes feature things that you may not have unlocked yet, in which case try to find suitable replacements that share similar properties and effects. 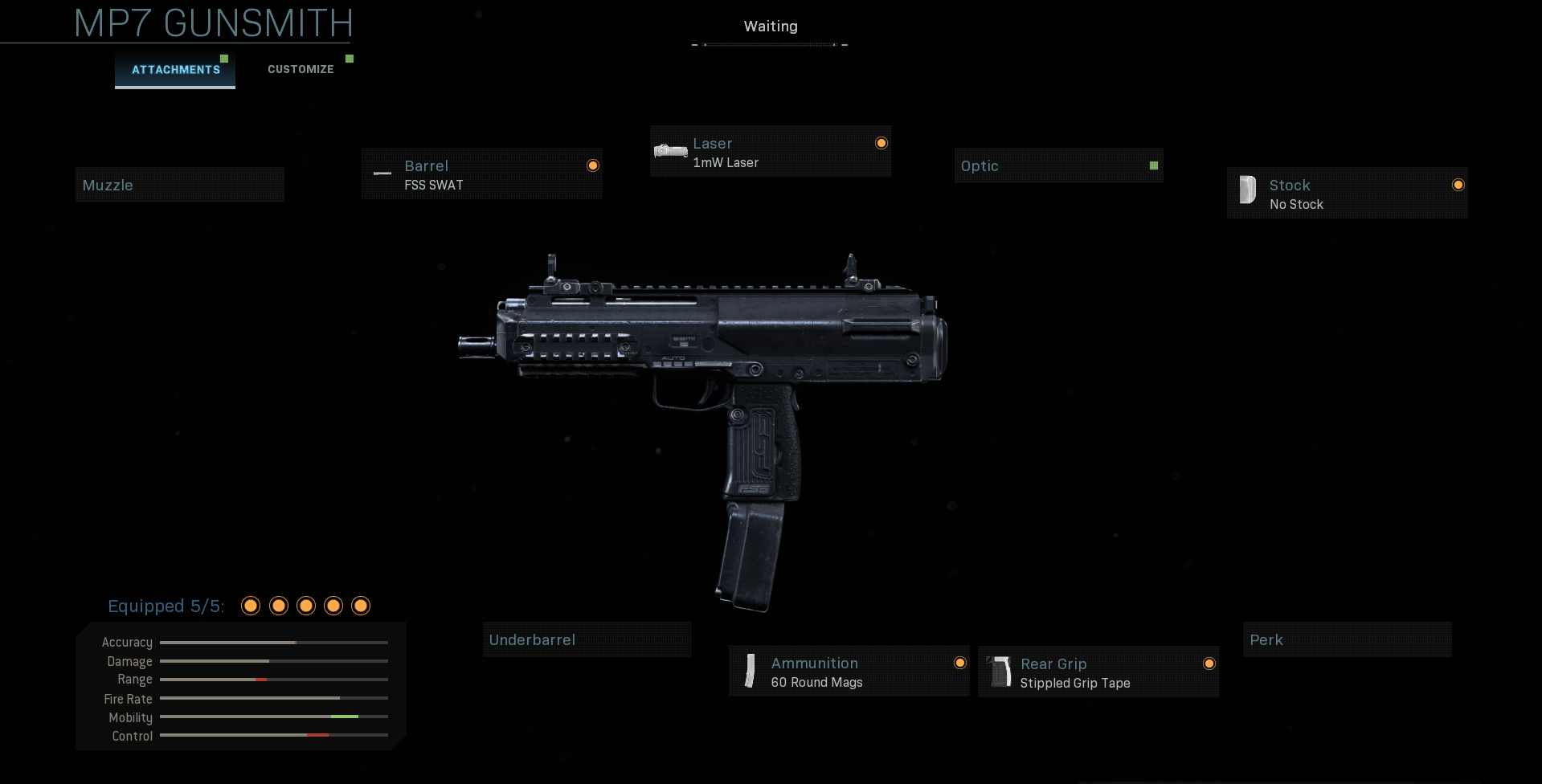 Adopting a run-and-gun style in Warzone isn’t the easiest thing to do, but if there’s one weapon to play that way with it’s the MP7, especially when equipped with these attachments.

The FSS SWAT Barrel, No Stock, and Stippled Grip Tape all prioritize mobility, which is why that stat is so greatly boosted. The 1mW Laser ensures higher hip-fire accuracy, and since finding time to reload isn’t always easy when rushing around, having all that extra ammo in each magazine will come in clutch.

Of course, when one stat is prioritized this heavily then at least a few others will take hits, and in this case, those stats are accuracy, range, control. But that’s okay because you don’t really need those stats if your plan is to be constantly getting in your enemies’ faces.

As for the rest of the class, the Combat Knife secondary and Double Time perk will help you move around faster, and having a Stim is great for instantly replenishing your health before getting into another gunfight.

This class is for those who may not be skilled enough to run and gun in this game, but still want to be constantly on the move.

These attachments ensure higher accuracy, range, and mobility, while the Monolithic Suppressor makes sure that no one can hear the sound of your weapon firing. This is key on Verdansk, where remaining undetected could be the difference-maker to help you pick up the win.

As for your tactical, there are a lot of ways you can go. The Smoke Grenade will keep your enemies guessing about your position, and could open the door to a quick getaway, the Decoy Grenade is great for misdirection, and the Heartbeat Sensor will allow you to see if there are any enemies nearby. This class is more or less the opposite of the run-and-gun loadout in that it helps the MP7 become much more viable at longer range, since the attachments provide a considerable boost to accuracy, range, and control.

It’s worth noting that this means that Mobility is the stat that takes the huge loss, although that’s by design since that’s the one category that you won’t need if your plan is to play slower, more tactical, and engage and longer distances.

Of course, this being the MP7, you can still definitely use it in close-quarter gunfights as well, and you will also have the M19 Handgun in your back pocket if you need another short-range weapon.

Scavenger is a good perk to have in this class since you’ll probably be using more ammo to eliminate enemies. Remember to play it slow with this setup and more often than not, you’ll find yourself in the final ring. This is an ideal setup for players who are looking for a balanced MP7 setup to take into Verdansk. While this loadout doesn’t suit a hyper-aggressive playstyle, it does have the tools to handle any situation you find yourself in.

Once again, Overkill has proven to be one of the more powerful perks available in Call of Duty, and even more so with Warzone.

If you want to build a good Overkill class with the MP7, the best approach is to pair it with a longer-range weapon, since the SMG itself is already so devastating at close range.

You can either use the run-and-gun or balanced attachment loadout for the MP7 to maximize its close-quarter potential and have a marksman rifle or sniper rifle as the second primary to cover longer distances.

You also have the option of pairing it up with a longer-range build of the M4A1 assault rifle, which is one of the most powerful guns in the game, and create an overpowered SMG-AR combo that could mow through the enemy team.

There you have it – the best classes and loadouts featuring the powerful MP7 SMG. Now, load back into the game, set up and use these classes in some Warzone matches, and let us know what you think!

Also, make sure to check out the other guides we’ve done for Modern Warfare and Warzone: