The Holger 26 LMG is one of the newest weapons in Call of Duty: Modern Warfare Season 1. For it, we’ve put together our top-five best loadouts and combinations of attachments that cater to a variety of play-styles.

Both weapons are to everyone across all platforms, as the Holger-26 can be unlocked upon reaching Tier 15 of the Season 1 Battle Pass, and the RAM-7 at Tier 31.

As that description suggests, this gun can actually be made to perform well in all kinds of situations when fitted with the right attachments, which is what we’ve aimed to do with our top-five classes. Each offers a specific quality, whether it be mobility, range & accuracy, or balanced, and there’s also an assault rifle mod and Overkill class as well.

The best aggressive class for the Holger-26 (SMG build)

Modern Warfare’s design doesn’t really accommodate aggressive play-styles too well, especially with an LMG. However, thanks to the Holger-26’s versatility, it can be turned into what is essentially an SMG, which makes it a lot more suitable for running and gunning.

The attachments all maximize movement and a bit more control, while only taking a little away from both accuracy and range, which aren’t really needed for this play-style anyway.

Double Time and Combat Knife help you run around faster, and Stim ensures that you can heal up as quickly as possible and get back into the action. Dead Silence is a good Field Upgrade to have, since it also increases movement speed, but Tactical Insertion can also be an option for larger maps so that you can spawn back in closer to hot zones.

The best long-range class for the Holger-26.

If you’re the type of player who wants to engage in gunfights at longer ranges, then this class was built for you. The attachments all work together to greatly boost accuracy, range, and control – the three things needed to be effective at long range. Consequently, mobility is reduced in this loadout, not that you need much of it anyway.

For the Perks, E.O.D. ensures enemies can’t eliminate you with cooked grenades, High Alert notifies you if someone is aiming at you from a blind spot, and Scavenger comes in handy to resupply your ammo if you survive too long. Speaking of extra ammo, Munitions Box is definitely a good Field Upgrade for this style of play.

If enemies get too annoyed with you and start to push your position, the Claymore will watch your back while the Smoke Grenade can be used to open up an avenue for escape.

The best balanced class for the Holger-26.

For a well-balanced weapon build, the three most important stats are accuracy, mobility, and control, because those three ensure that the weapon performs decently in all situations. The attachments in this class evenly boost up all three, with the only stat taking a slight hit being range, but that’s compensated for with the increased accuracy.

While this balanced build can be used in virtually all loadouts, the rest of this loadout is designed for objective-based game modes, starting with the JOKR Launcher for getting rid of enemy streaks.

Whether you go with Ghost or Pointman depends on your playstyle in objective modes. If your plan is to directly attack the objective and rack up points for your team, then Pointman is ideal here. However, if you’re more of a flanker and sneaky player who tries to get eliminations on distracted enemies, then Ghost is probably a better option.

Smoke Grenade and Trophy System are both essential. One will give you great cover for capturing objectives and/or breaking through enemy blockades, while the other will prevent the other team from showering you with explosives while you’re racking up points.

The G36C is a well-known assault rifle in Call of Duty, having featured in all three of the original Modern Warfare games. While it’s not available in the 2019 installment, it can be replicated by equipping the Holger-26 with the right attachments.

This can also be considered a balanced build, boosting accuracy, mobility, and control with a slight decrease in range. However, the main difference between this and the previous class is that this one functions as an AR, clear distinctions being the 30-Round Mags and the increase in agility.

This G36C replica build comes courtesy of GFINITY Esports. As for the rest of the loadout, we’ve included what we feel are the most viable Perks and equipment, but you can always change it up based on your own preferences.

Overkill is a very powerful Perk in Modern Warfare, even more so than other Call of Duty titles, mainly because there’s no pick-10 system in this game. This means that players who use Overkill can build loadouts with two primary weapons fully-stacked with five attachments each.

For the Holger-26, a good approach is to pair it with a gun whose primary function is opposite to the LMG’s, creating a combination that can be used in all situations and ranges.

For example, if you’re using the SMG build of the Holger-26, then pairing it with a sniper rifle or marksman rifle would be smart. Conversely, the longer-range build should be paired with a shotgun, such as the R9-0 pictured above.

The rest of the loadout is up to you, but we would recommend going with Amped, since it can help you swap between your two guns faster. 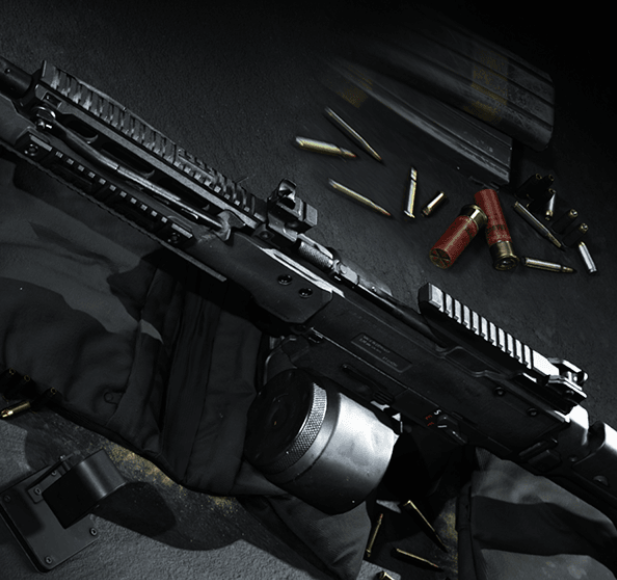 The Holger-26 is the newest LMG added in Modern Warfare.

There you have it – the five best classes and attachment setups for the new Holger-26 LMG. Now, load back into the game, build some of these in multiplayer, and let us know what you think!

Also, make sure to check out the other guides we’ve done by visiting our Modern Warfare weapon guides hub, which includes the best classes and attachments to use for the M4A1, AK-47, RAM-7, MP5, MP7, and bonus guides, such as the 15 “secret” weapons you can build with Gunsmith.