DICE have reversed the controversial time to kill changes in Battlefield V, only days after implementing them, after waves of criticizm from players.

On December 12, an update altered multiplayer time to kill very significantly in all modes, with a new ‘core’ conquest mode added which would used the previous settings.

However, such a drastic change, with little warning and no engagement with fans beforehand caused outrage, and even a delicately typed explanation on December 14 didn’t help matters.

In their explanation DICE said it was not their intention to “cause divide” in the community, but fans pointed out there was no divide – only anger at the decision in unison from all players.

To the joy of these players however, on December 17 Dan Mitre, Global Community manager at DICE, announced that they would be reverting the changes on December 18.

They came to the decision after listening to feedback and reviewing statistics, stating that the intention was to make the game “more enjoyable for new players”, but this was at the cost of their ‘veterans’.

This Week in #Battlefield Highlights of Upcoming Goodness:

Fans praised the decision, happy to see that they had been listened to and that their complaints had made a real difference.

It strikes a similarity with the recent backlash around Fortnite’s ‘Infinity Blade’, and its subsequent removal, again thanks to the vocal player base.

You can read DICE’s full letter to the community below, via Reddit. 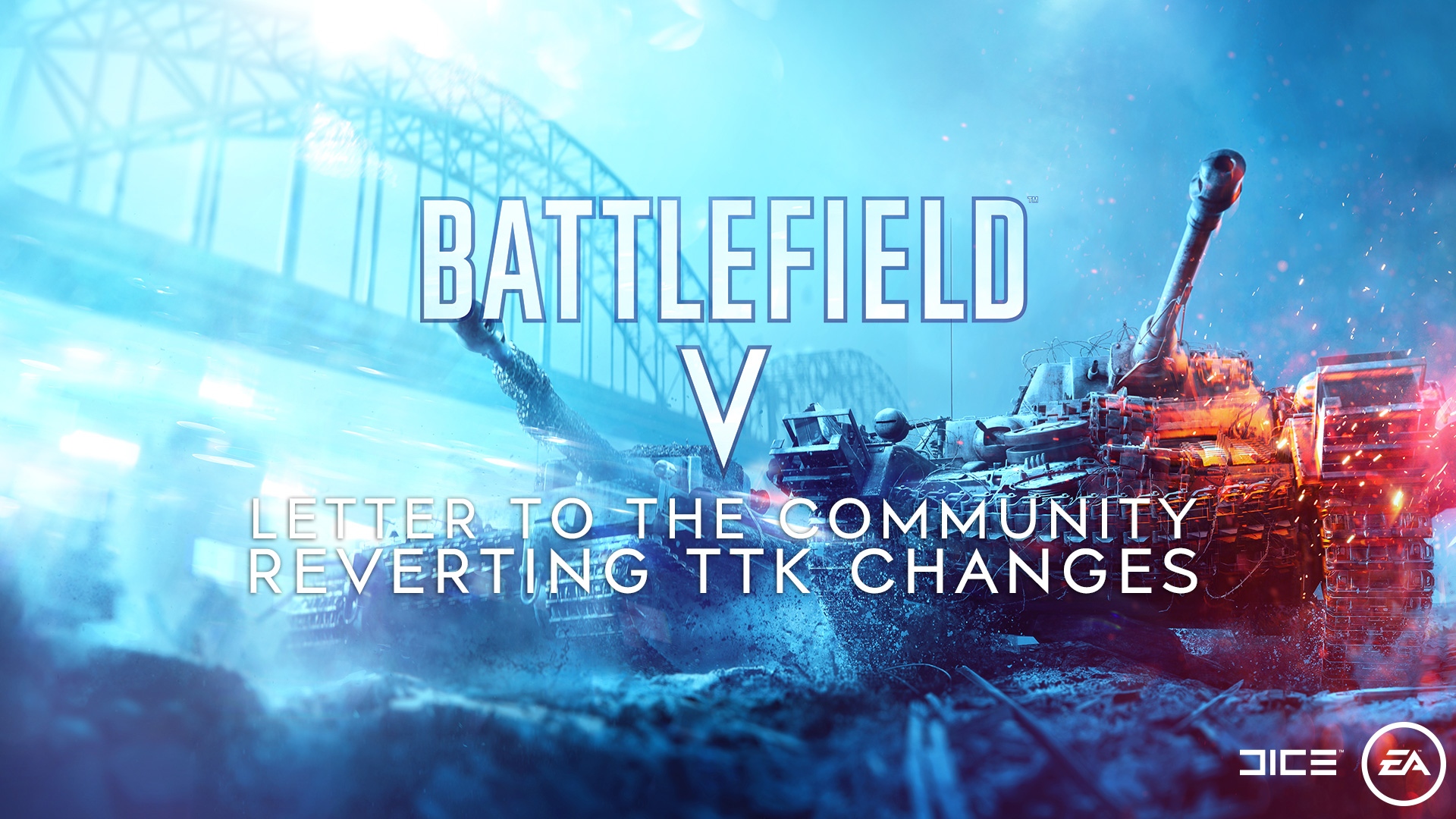 We’ve committed to giving you an update this week around Battlefield V’s TTK (Time To Kill) adjustments, as seen in lastFriday’s letter to the community. After rolling out those changes last week, we’ve listened to your feedback, reviewed our statistical data, and have made the decision to return to the original TTK values seen at launch.

Our intent with the TTK changes was to see if we could evolve the Battlefield V experience and make it more enjoyable for new players, whilst also making sure the Battlefield vets have a choice with a more “core” experience suiting their preferred play-style. Clearly we didn’t get it right. Veteran players didn’t ask for the change, but as game developers, we took it upon ourselves to make those changes based on extensive data and deliberation. It truthfully wasn’t an easy decision for us.

It’s important to acknowledge that we have a challenge bringing new players into Battlefield V and onboard them to become more experienced Battlefield players. It’s been a challenge across our games for a long time, as many will know, and becomes even more important for us to improve upon our post-launch experience with consistent updates to the game through the Tides of War. Our desire to service a game that caters to old and new players will continue. How we get it right isn’t easy, nor will it be quick, and we appreciate when the community comes together and helps us on this journey.

We have learned a lot over the past week. We’ve gained clarity on the issues you’ve shared with us around Time To Death (TTD), we’ve identified imbalances in weapons, and have recorded real-world data on how TTK changes our game and impactS our players. With that knowledge we have a better idea of how to improve the game going forward, and have already begun taking steps to improve the experience for all our players, new and veteran.

Starting tomorrow, December 18th at 4am PT / 7am ET / 1p CET, we will revert the TTK changes to their original launch states, we will remove the “Conquest Core” playlist, and we will not introduce any new “Core” playlists as mentioned in last week’s letter. This will be a server-side update and does not require a client download. We’ll continue to identify how we can improve the Battlefield V experience and will have more information for you around those changes starting in the new year.

Thank you for your feedback and patience. We’re excited to be on this journey with you.