The day a lot of Battlefield 5 Firestorm fans have been dreading has come as the game no longer has Duo matchmaking available – and players are fuming.

Firestorm is Battlefield’s entry to the battle royale genre and fans of the legendary franchise have been loving the new spin on the classic BF formula. But, the latest update to the game is proving to be very unpopular for a ton of players.

In a Reddit post, DICE Community Manager ‘PartWelsh’ updated the community as to why the Duo mode had been removed again, citing the limited time mode had been falling off in terms of popularity. 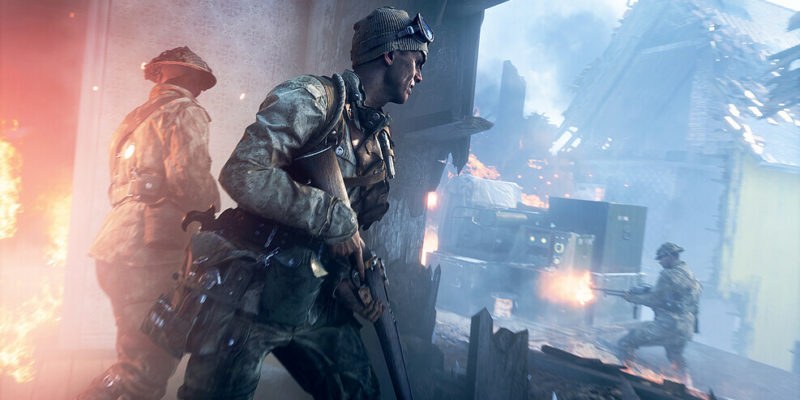 Firestorm players have been loving the Duo matchmaking, but might have to wait a while before getting it back.

Firestorm was tailored for a squad experience, but a huge portion of players have been loving the option of queuing up with just one friend. But, the people at DICE have been noticing a different trend which ultimately led to the switch.

“When Duo was first removed, you told us that you wanted to see it come back and we were happy to support,” the post reads. “Since then, we’ve seen more folks jump back into Squads mode, with less preferring to Firestorm it up in Duo – so we’re going to get back to the original plan today and we’ve disabled it’s matchmaking.”

Even though the mode had “received an overwhelmingly positive reaction at launch,” both developers and players knew that it was always going to be a limited time. But now that the mode has been axed again, the community is strongly insisting it return.

Firestorm Rotations Update – So long and thanks for all the Duo! from r/BattlefieldV

When will Duo mode return to Battlefield 5 Firestorm?

Since making the announcement, the community has been vehemently expressing their discontent with the move, while wondering when, or indeed if, the mode would return.

“Is this a joke?” Reddit user ‘MoreDotsOkStopDots’ asked. “That’s the only reason I get on anymore, same with my buddy. All we play is Duo. This limited time stuff really needs to stop. The fact it arrived, then was removed, then came back and now being removed AGAIN with no foreseeable return is just, idek anymore.” 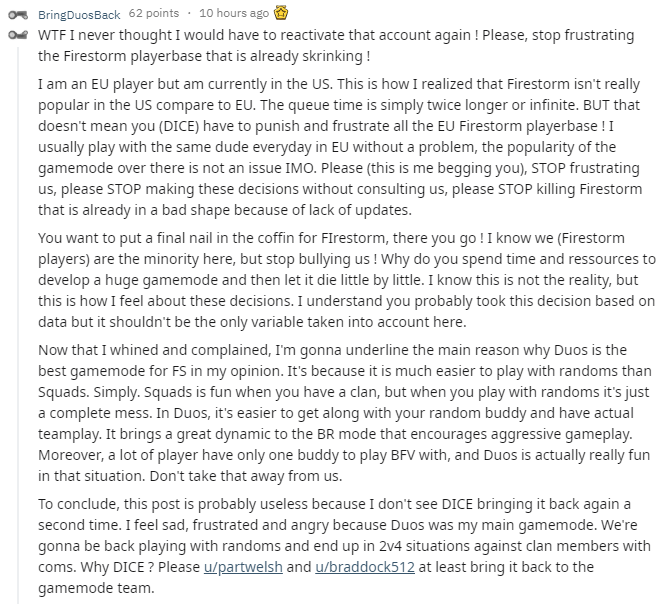 Since the announcement, players have been giving epic accounts as to why Duo mode shouldn’t be taken out of Battlefield V Firestorm.

Unfortunately, the DICE spokesperson was vague in when exactly Duos will be back, stating: “Genuinely, [Duos] will return. Whether we do that on certain weekends every month, or for a week to celebrate each of the future Firestorm updates – you will see Duo again.”

Fans found it even more disappointing that the company is “not presently expecting it to return as a permanent addition,” but at least it won’t be the last time Firestorm players will be able to drop into Duos.