The long awaited Battlefield V battle royale mode, Firestorm, was released to much excitement on March 25. Battlefield fans are already asking for a much needed update, however.

An update for Battlefield Firestorm has been all but confirmed for this week. In a Reddit post from Dice, they discuss what’s upcoming in the schedule for Chapter 3 Trail by Fire.

Within the sneak peak into next week section, beginning April 1, is the release of “Chapter 3 Trial by Fire Update #2”. Depending on certification, a process which EA should have few problems with, we should get both an announcement and the update itself this week.

At the forefront of Firestorm’s weaknesses is looting. The process and ease of it has been criticized throughout social channels. The Battlefield Twitter account have shared the following video showing how they intend to improve it, at least in the short term.

We've heard your feedback, and are working on some changes to how you loot in #Firestorm

This is the beginning of that process, and it starts with our next update. pic.twitter.com/mGDfI2WPau

Without question, the main frustration put forward to the Battlefield V team is looting. Nobody has had anything good to say about it and it will almost certainly be the subject of some form of change.

Specifically, the problem arises when looting multiple items in a small vicinity, i.e. after you kill someone. Items such as guns, ammo and gadgets fall on top of each other. This makes it either very awkward or not possible to pick them up.

With the Firestorm on your back or an enemy nearby the inability to pick something up quickly can ruin your game. There are also concerns about the inventory management system but right now this takes a back seat to looting itself.

When asked about an update to the looting system, John Stanley replied: “3.1 (Next patch) – There will be an increase in loot spread so that its easier to pick up (improve the issue of stacking). We will continue to investigate other designs to make the looting the best it can be.” 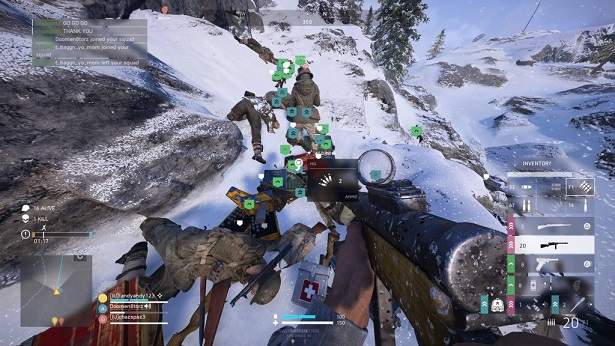 Feedback suggests another issue Battlefield players have, especially those indulging in Firestorm, is with the XP generated from playing the battle royale mode.

This is also something that may be addressed in the upcoming update.

Other less pertinent questions were also asked about the Firestorm map and potential additional attachments being added in the near future.

It seems as if the developer is taking on plenty of feedback about the battle royale mode from fans but there is still plenty of work to be done if the game wants to catch its current set of rivals.