With Apex Legends Season 4: Assimilation nearing its end, it’s never too early to start looking ahead to Season 5, and we’ve got everything there is to know so far.

Even though it’s almost done, there is still some of Season 4 left for Apex Legends players to enjoy, such as the new Battle Armor Event that will put a spin on how body shields work in a special LTM.

That’s not stopping players and fans from looking forward to what lays ahead in the next chapter, especially since each one always comes with its own new Legend, weapon, map changes, and a massive update.

It’s never too early to look ahead to Season 5 of Apex Legends.

When is Apex Legends Season 5?

Apex Legends season 5 will start on May 12.

Respawn announced on April 24 that they’ve pushed back the Season 5 starting date by a week. Season 4, which was set to wrap up on May 5, will now be ending on Tuesday, May 12, which is when Season 5 will kick off.

“We’re also extending Season 4 by one week, giving those who want to grind out their Battle Pass or try and hit that next level of Ranked a little more time to do so before Season 5 kicks off on May 12,” announced Jason McCord, Design Director for Apex Legends.

Furthermore, prominent leaker iLootGames tweeted out that it will be called “Fortune’s Favor.” While unconfirmed, this name was apparently leaked by a developer who was discussing some of the aspects of Season 5.

Who is the new Legend for Apex Legends Season 5?

Every season has introduced a new Legend in Apex Legends, and S5 should be no exception. So far, we’ve gotten Octane, Wattson, Crypto, and Revenant, although the last one came after some misdirection, as Respawn initially announced Forge then killed him out of the blue.

While we won’t know exactly who the new character will be until it gets officially announced, all of the leaks and speculation suggest that it’s going to be Loba, who has been rumored to be part of Respawn’s plans for quite some time now.

Her exact identity remains hidden for now, although many believe Loba is the little girl that was shown in the Revenant reveal trailer. The video shows her holding a small wolf figurine, and the world loba means ‘she-wolf’ in Portuguese, the language that her father, Marcos, can be heard speaking before he’s murdered by Revenant.

Could Loba be the next Legends added in Apex Legends Season 5.

That sets up her story to be one of revenge, and now that the Synthetic Nightmare is in the game, it would make sense for the devs to add her next to keep the ever-thickening plot of Apex lore moving forward.

That said, players shouldn’t be too sure until something does get announced since Respawn have proven that they’re willing to go as far as adding fake content to the game’s files to fool dataminers and leakers.

The easy and obvious answer to this is yes, the devs will in all likelihood add a new weapon to the game. What it’ll be is a lot more difficult question to address, since there hasn’t been any clear indication it’ll be any specific gun.

There have been some leaks for two SMGs – the Volt and CAR, both of which have featured in Titanfall 2. It would make sense for Respawn to add a new submachine gun, considering that’s been the one weapon category they’ve not expanded since launch.

However, the same was said before Season 4, and the new gun ended up being the Sentinel sniper rifle, so there’s really no telling what it’s going to be as of now. 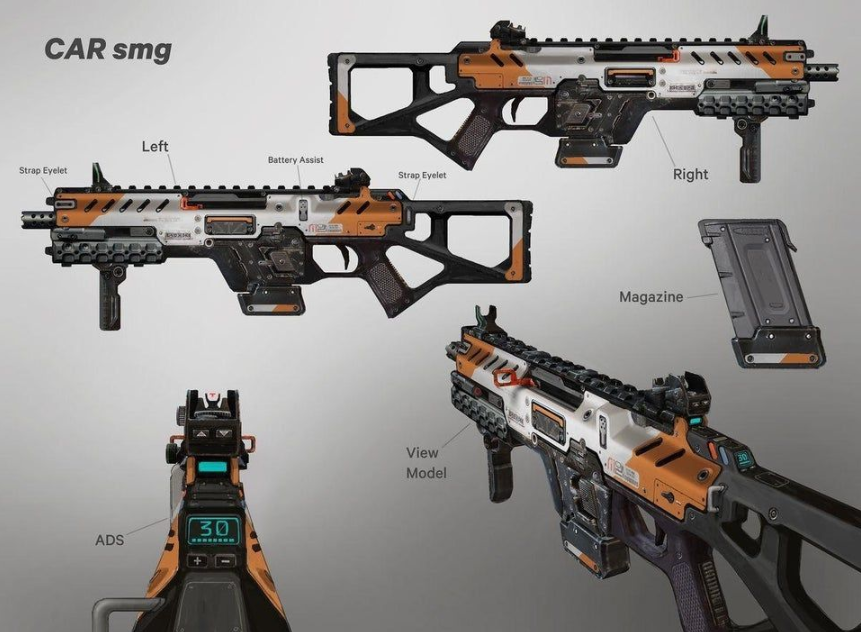 The CAR SMG featured in Respawn’s Titanfall 2, and it could be the new weapon in Apex Legends Season 5.

Will there be a new map for Apex Legends Season 5?

While Respawn did introduce the World’s Edge map after the first two seasons, it’s hard to see them doing that again. Instead, they’ll most assuredly add and make major changes to it, such as how they really revamped the map for S4.

What could also be on the radar is the increased availability of Kings Canyon, the map used for Seasons 1 and 2. Since World’s Edge became the game’s main setting in S3, Respawn have brought back Kings Canyon here and there for special occasions, and the player-base has been happy about it every time.

In fact, as we mentioned above, the midseason split will make KC the default option for Ranked Play, so it’s clear that the devs are trying to integrate the older map. back into the game.

There’s a chance, albeit maybe a slim one, that the developers will make both maps equally playable throughout S5, which will cater to everyone’s preferences. As with everything, only time will tell, of course.

Kings Canyon has been featured more and more again in Apex Legends since being replaced by World’s Edge.

How much will the Season 5 Battle Pass cost?

Every Battle Pass so far has cost 950 Apex Coins, so it would be reasonable to predict that one for Season 5 will set you back the usual $10 that it takes to purchase 1,000 coins from the store.

However, if you purchased the S4 pass and didn’t spend any of the currency that you get for leveling it up, then you should have enough to buy the next one without having to spend any money, assuming you hit a tier high enough to get the necessary coins.

That’s everything we know so far about the upcoming Season 5. As always, we will continue to bring you the latest details, leaks, and rumors as more information becomes available between now and May 5.