A new original skin idea is taking Apex Legends fans by storm by showing a new fashionable look for one of the game’s most popular legends, Wraith.

Wraith is one of the game’s original characters, and she quickly became one of the most popular legends partly because of her hitbox, which used to be one of the smallest in the game.

She also had the first Heirloom item available in the battle royale title, which helped her become one of the most-picked legends during Apex’s wild first year.

Wraith has become one of Apex’s most iconic legends.

To celebrate all things Wraith, Reddit user cherry_lolo created their own original skin concept for the legend that turns her into a punk rocker.

Cherry gave Wraith a studded leather jacket, an appropriately large buckle, and a new haircut to top the new look off. Some users said the skin looked more “goth” than punk, which is a debate we’ll leave up to the fans. 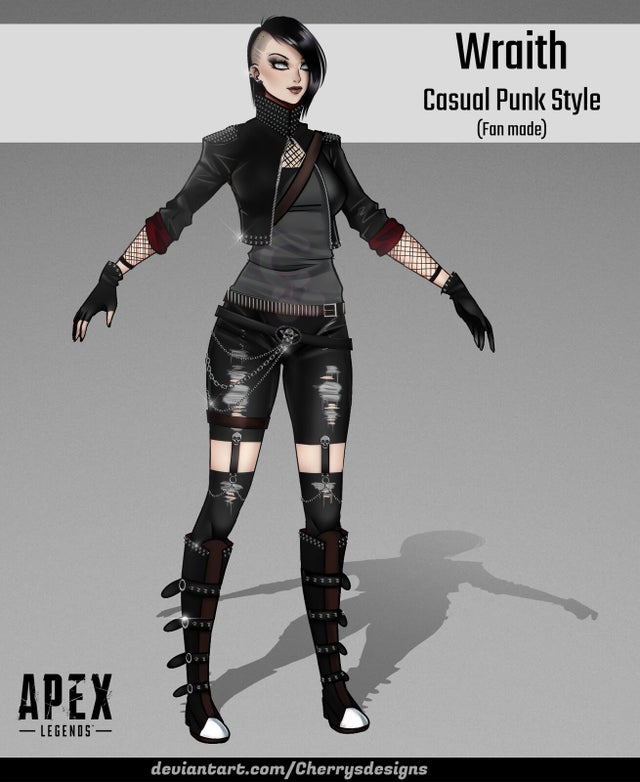 “Yes, I know she doesn’t look like the in-game Wraith. This is my style and I’m a self-taught freelancing artist,” Cherry said in the comments on the piece. “I had little free time for this project and I tried to give her a casual/punky look.”

Despite the lack of resemblance to the in-game model, Apex Legends fans seemed to really like the skin concept even if it is still just an idea.

Cherry even said they would let Respawn use the skin idea for free in the future if they wanted to, so maybe someday down the road we’ll see this brought to life.

In other Apex Legends skin news, a new skin has been released in Apex Legends called Cyber Attack Crypto, and it’s available free for a limited time.

The skin is available to any player with Twitch Prime liked to their Apex account, and will be around until January 16, so don’t forget to grab it before it disappears in 2020.