The game’s latest teaser is a transcript of a dialogue between Loba, Yoko Zepnewski, and Cheryl Amacce—the latter two being unknown characters who appear to work for Hammond Robotics.

Amacce proclaims she’ll be able to help Loba in her efforts to enact revenge on Revenant, but that the esteemed burglar will need to steal another artifact, intriguingly from a King’s Canyon island that has not yet blown up.

There is an obvious takeaway here: the next big quest for players to complete in Apex Legends will be hunting down some treasure that is “buried underneath Kings Canyon.” But the more intriguing takeaway comes later, as Loba reminds Amacce that there is no longer a subterranean Kings Canyon as the island was shredded by explosives. 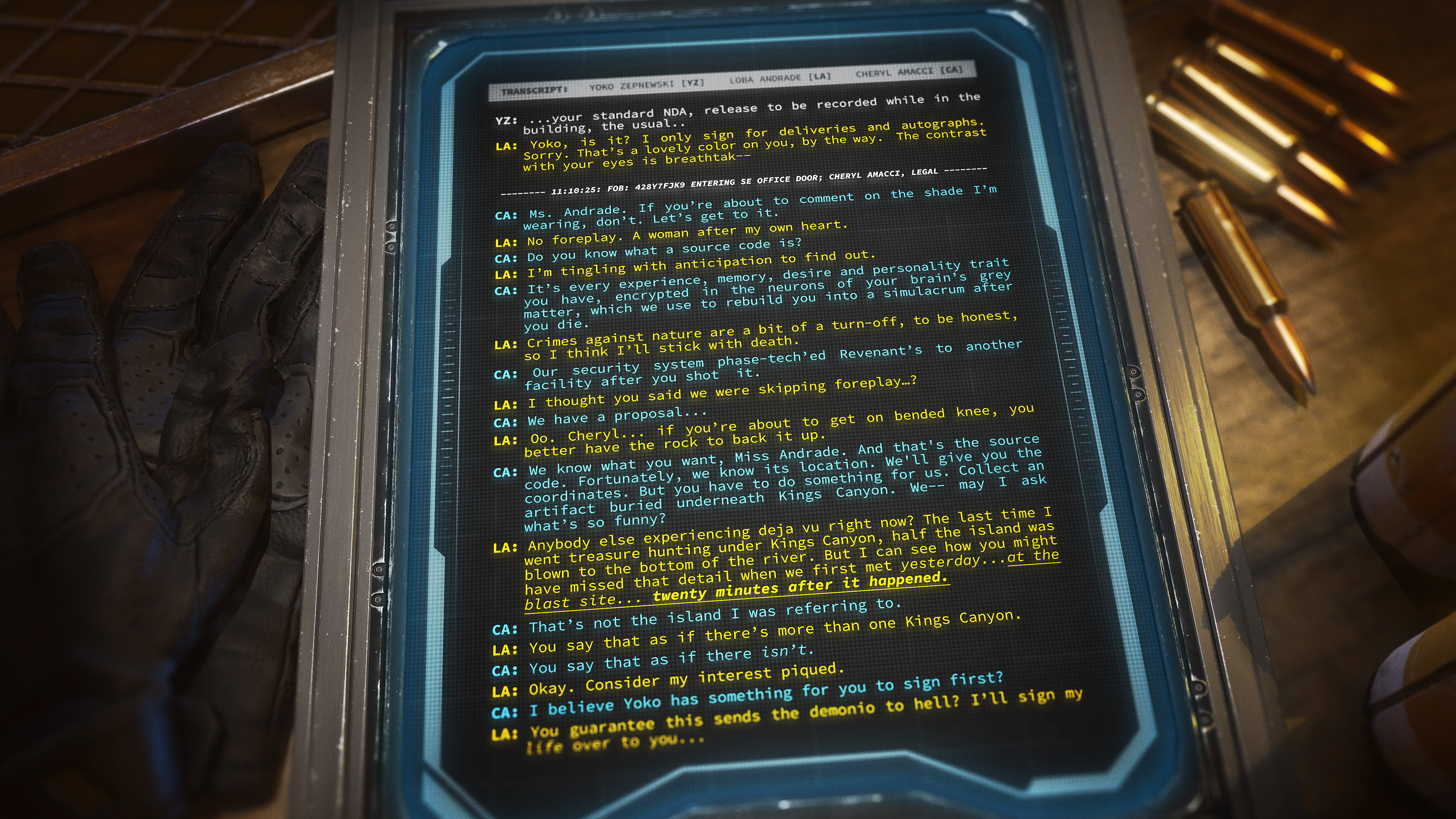 An interesting conversation featuring Loba that hints at the future of Apex Legends.

Snarkily telling Amacce that she’s acting like there is more than one version of the same location, the Hammond Robotics employee responds: “You say that as if there isn’t.”

With much of Kings Canyon destroyed by the events leading into Season 5, suggesting that Loba go underground to steal things once again seems ridiculous. The fan-favorite areas Skulltown and Thunderdome are gone, but so is most of the island’s subterranea. So how can Loba fulfill Amacce’s request?

Season 5’s Kings Canyon found much of its environment decimated and blown into the surrounding ocean.

The first theory is interesting but somewhat unexciting. Technically, the Kings Canyon After Dark map, which was introduced during the Shadowfall LTM during Season 3’s Fight or Fright event, is the same island but in an alternate dimension befitting spooky zombie-esque Shadows.

The second is entirely nebulous and could mean vastly different things, but not entirely far-fetched given Hammond Robotics’ history.

Kings Canyon After Dark was very spooky, but could it also be the site of Loba’s next stealthy shenanigans?

Whatever the case, June 23 can not come soon enough as Apex Legends fans were already excited for the upcoming Lost Treasures Collection Event, which will feature loads of new content.

This quest teaser only adds to the excitement. If players were getting bored of the standard quests, then the possibility of pushing Loba and Revenant’s story arc further while deploying into a novel Kings Canyon will be alluring—especially if it means Skulltown might be making a return.