The third season of Apex Legends was released on October 3, bringing with it new weapons, balance updates, a new character, and even an entirely new map.

Players have been hard at work trying to figure out the hidden secrets of the map that replaced King’s Canyon, and some have already begun to master exactly what they need to claim victory after victory in the game.

Advanced movement is nothing new in Respawn‘s frenetic battle royale, but NRG Esports star dizzy’s newest tactic might have changed the game again. In a clip shared on October 3, Meadows appears to have absolutely mastered using one of the new vertical ziplines.

With an enemy shooting down at him from the top of a zipline perch, dizzy maneuvered from left to right, constantly gaining elevation in the process before eliminating the shooter that had been taking pot-shots at him before.

From the first perspective in the clip, we see through the eyes of a fellow Twitch streamer as he misses shot after shot on the pro player. Finally on the same level, dizzy connects return fire of his own to find a swift elimination.

“Woah what the f*ck, did you see that?” the bamboozled streamer asked his teammates while taking damage. One of the most decorated professionals in the Apex Legends scene, it’s no surprise that this stunning play from dizzy caught his opponent by surprise.

Highlighting the ridiculous play from his own POV in the second half of the clip, dizzy shows just how fast he reacted in order to avoid being eliminated.

Immediately noticing the incoming fire, he leaped from side to side and essentially made himself a near-impossible target to connect with. Known for his absurd movement in previous seasons, this could very well be the first instance of a new, advanced movement tactic that pro’s around the globe will benefit from as competitive play shifts to the brand new locale. 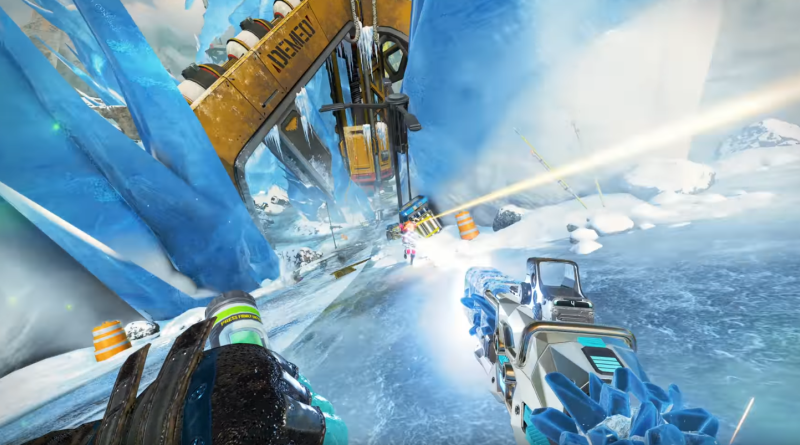 An example of some new terrain found throughout World’s Edge.
[ad name=”article5″]

Although dizzy is hard at work figuring out how to speed across the new map, other stars have simply been sitting back and enjoying the game. Michael ‘shroud’ Grzesiek is one such streamer, with the Twitch sensation revealing he’s a “big fan” of the new level design.