An Apex Legends player has revealed the weapons with the best damage per second (DPS) in the battle royale and the results are pretty interesting.

In order to succeed in a battle royale like Apex Legends, aside from needing the luck to be on your side, you need to have the best loadout possible. This means trying to tweak weapons as you progress through games – either by picking up better ones or adding attachments to the ones you have.

You could win a game by solely using a pistol but if you don’t get that lucky, or have the skill to do so, you’re probably going to need something that deals the most damage. But which weapon does just that in Apex Legends? Well, the DPS – or damage per second – stats for the current crop of weapons has been revealed.

Having the best loadout possible will help you score a win in Apex Legends.

Redditor Adanub drew up their graph after some testing and posted it to the Apex Legends subreddit for all to see. Perhaps unsurprisingly, the Devotion – which can only be acquired through in-game supply drops – leads the way in both body and headshot damage stats, but looking further down the list reveals some pretty interesting findings.

The P2020 with the Hammerpoint Rounds hop-up is the second-best DPS gun when it comes to body shots, dealing a touch over 230 damage per second to unshielded targets. Though, there is a gap between that and the third-placed L-STAR.

Further down the list, Adanub revealed that the Prowler on auto mode comes out significantly better than using it as a burst weapon in both categories – which might come as a surprise to some fans.

The Redditor offered an update to their initial list, changing the ranking based on the initial damage that a gun gives off. Based on the damage you can cause in one second, the P2020 with the Hammerpoint Rounds hop-up jumps up to claim top spot, while the Prowler burst and auto modes take second and third respectively.

One of the biggest drops down the list comes in the form of the Devotion LMG, though, the Redditor notes that the LMG’s wind-up mechanic is taken into consideration for the ranking. 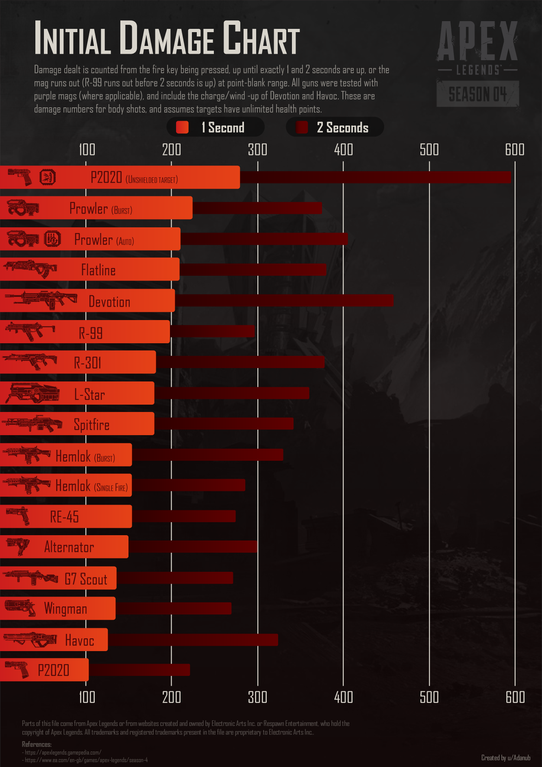 Of course, stats are one thing but picking which weapons you want to use does usually come down to comfortability and familiarity with them.

Though, you could start to switch up your set-up now that you know which weapons are likely to lead you to glory.