An Apex Legends player has managed to record a clip of what they say is proof that Gibraltar’s Gun Shield is the character’s “biggest issue” in Season 4.

The Gun Shield is an ability unique to Gibraltar that produces a protective barrier with 50 HP around his upper torso that also allows him to fire out.

It’s been both buffed and nerfed throughout the game’s history, but now some players are suggesting that the way it absorbs damage isn’t working as it should.

Gibraltar’s Gun Shield can provide some crucial cover for the beefy character.

Reddit user ApexToast said they had encountered the issue with Gibraltar’s Gun Shield a number of times before, but only recently had been able to capture it.

Peacekeeper in hand, Toast bursts in on an unsuspecting Gibby and is convinced they burned his shields with one well-placed shot. After that, Gibraltar manages to activate their Gun Shield to cover the next shot, which destroys the shield but apparently fails to do any additional damage after that.

Usually when shooting something like a body shield and breaking it would carry the remaining damage over to base HP, but apparently this isn’t the case with Gibraltar.

Apparently this issue isn’t considered a bug, but just the normal way Gibraltar’s Gun Shield works. Players are divided, though, on whether or not it should be changed.

“It’s not a bug but it should be changed I agree,” Reddit user GrandmasterSluggy said in the comments. “It is working as intended though but a common point people make is that it should go through with remaining damage.”

Other players, most likely Gibraltar mains, argued that every hero needs something to set them apart in the game, so it’s worth keeping the Gun Shield interaction around as a sort of an unlisted passive.

“Ok, don’t send me to hell on this one, but I don’t think it needs to change. It is the way it is,” a user named NC_Ender_Wiggin countered. “His gun shield should have other nerfs but not bleed-through. It should be another obstacle. I can tell you that it is an annoying thing to deal with, but so is every other legend (RIP Revenant and Mirage) in their environments.”

“It sucks fighting Wattsons and Caustics when they’re camping. It sucks to fight Lifelines and Bangalores when they run off and pop revives. It sucks when you fight Pathfinder and get him low but he grapples away. These are their abilities and they suck to counter,” Wiggin continued. “Gibraltar is no exception, but taking this from him would be like nerfing every other legend’s strong suit.” 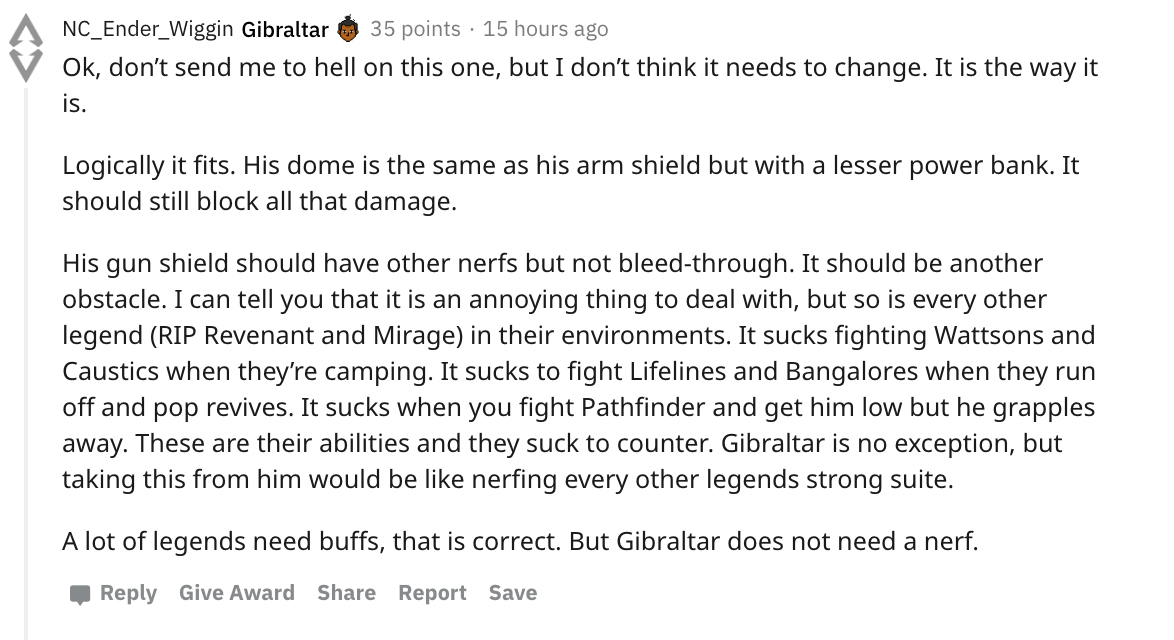 Whether or not Respawn will change the way the Gun Shield interacts with damage remains to be seen.

However, the issue clearly has players split on how much protection the ability should actually provide, so it could be something devs look into in the future.