There are plenty of ways to welcome in the New Year every December 31, from parties with friends, to watching fireworks, and now it looks like there might be an in-game fan-led celebration for diehard Apex Legends fans too.

While some battle royales like Fortnite have dev-run in-game events where players can lay down their arms and celerate together — like this week’s Star Wars: The Rise of Skywalker scene aired at drive-in cinema location Risky Reels.

Respawn hasn’t had many of those throughout the title’s first year, however, and one festive Apex player is suggesting fans take matters into their own hands so they can see out 2019 with a bang, all while in the game they love.

Mirage’s Town Takeover seems like the perfect place for an in-game NYE party.

Now that Mirage has brought the party to World’s Edge in the form of his firework-shooting ‘Mirage Voy’age’ ship, Apex fan ‘Dana94Banana’ suggested it might be the perfect place for those not celebrating New Year’s Eve outside to party.

“Now that Apex has an actual party location with music, lights, and fireworks, I thought it would be a nice idea to make use of that as a community, for those who for some reason can’t, or don’t want to celebrate NYE outside,” they said.

“It seems that quite a few people have issues with this game, including myself, but wouldn’t it be nice to put that aside for a moment and enjoy our time together in this awesome, sudden, and surprising video game that Respawn shared with us?” 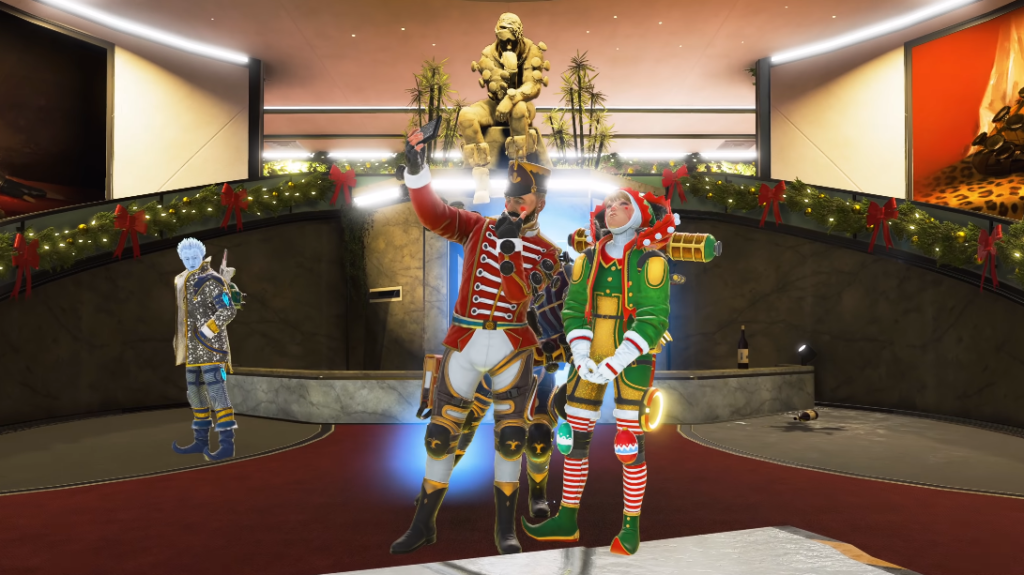 Apex fans are preparing to celebrate 2019’s NYE with a party on Mirage’s Voy’age.

According to Dana94Banana, the plan would be for everyone loading into a casual match to drop straight to the Voyage ship, “peacefully,” and hit the party-button right when the clock strikes midnight and 2020 finally rolls around.

“My idea would be that as many people of the lobbies as possible ALL land at Mirage’s Voyage – peacefully – shortly before midnight in your respective time-zone and then push the party-button when the time is right,” they suggested.

“We could goof around a bit and let the match end in one giant boxing fight or something. I’d love to see the Apex Legends community doing something big and sweet all by itself. What do you all think about this idea?”

Most players were in immediately, though a few suggested the reach of Reddit, where the idea was first posted, may mean there were plenty of players still gunning for kills and victories across World’s Edge once the clock struck midnight.

One Reddit user suggested all partygoers could choose the same three legends — Mirage, Pathfinder, and Gibraltar were one suggested trio — so they could clean out spoil-sport opponents before getting the NYE party well and truly underway.

Of course, there were a few players that doubted it would work, and suggested they might just turn up just to pad their KDA instead of getting into the New Year’s Eve celebrations with the rest of the players at the turn of the decade.

“Sounds like free frags to me,” said ‘hereatthetop,’ who clearly wasn’t in the festive mood when the suggestion first dropped.

Whether or not players actually embrace the celebrations, it’s probably worth a try at the very least, especially for those that will be in-game during NYE anyway.

On the plus side too, if the idea gets big enough, maybe Respawn will take notice and add a short-term playlist where players can’t fight and score frags, like Fortnite often does, meaning fans can enjoy the celebrations on the Voy’age in peace.