NRG Esports pro players dizzy and KingRichard, along with former Overwatch pro Mendokusaii, have won the March 1 running of the Code Red tournament for Apex Legends, hosted by Dr Disrespect, BoomTV, and EsportsArena.

The trio, named King’s Canyon, edged out popular streamers Summit1G, JoshOG, and Iam_Chappie (The Big Weiners) in the grand final to secure the $13,000 first place prize.

The top three was rounded off with Reid’s Money Team, which featured vsns, chocoTaco, and HusKerrs who ended up losing to Summit’s team in the Loser’s Bracket final.

If you are unfamiliar with how Code Red tournaments work, make sure to brush up on the format before reading on with the rest of this recap.

Code Red is a double-elimination tournament featuring eight teams of three players each.

Since custom matchmaking is not yet publicly available in Apex Legends, teams matched up against each other in the bracket had to separately load into three public matches each and try to score as many points possible, based on the following format:

Having won the Winner’s Bracket, King’s Canyon came into the grand final with a huge advantage, as they only had to win one of two matches, while The Big Weiners, who were coming from the Loser’s Bracket, had to win two in a row.

The match start off very tight, as dizzy and co. held a slight 28-23 lead after both teams won their respective games in map one. Map two very much followed the same trend, with both teams winning their games again, and King’s Canyon led 56-48 going into the third map of match one.

The big separation between the two teams came during this map, as King’s Canyon put on a stellar 30 point performance while The Big Weiners only mustered one point, giving dizzy and his team the 86-49 victory.

The match win wrapped up the tournament victory, as dizzy and KingRichard have now won the first two Code Reds in Apex Legends. Their first victory came on February 16, although their third teammate at the time was Ninja and not Mendokusaii. 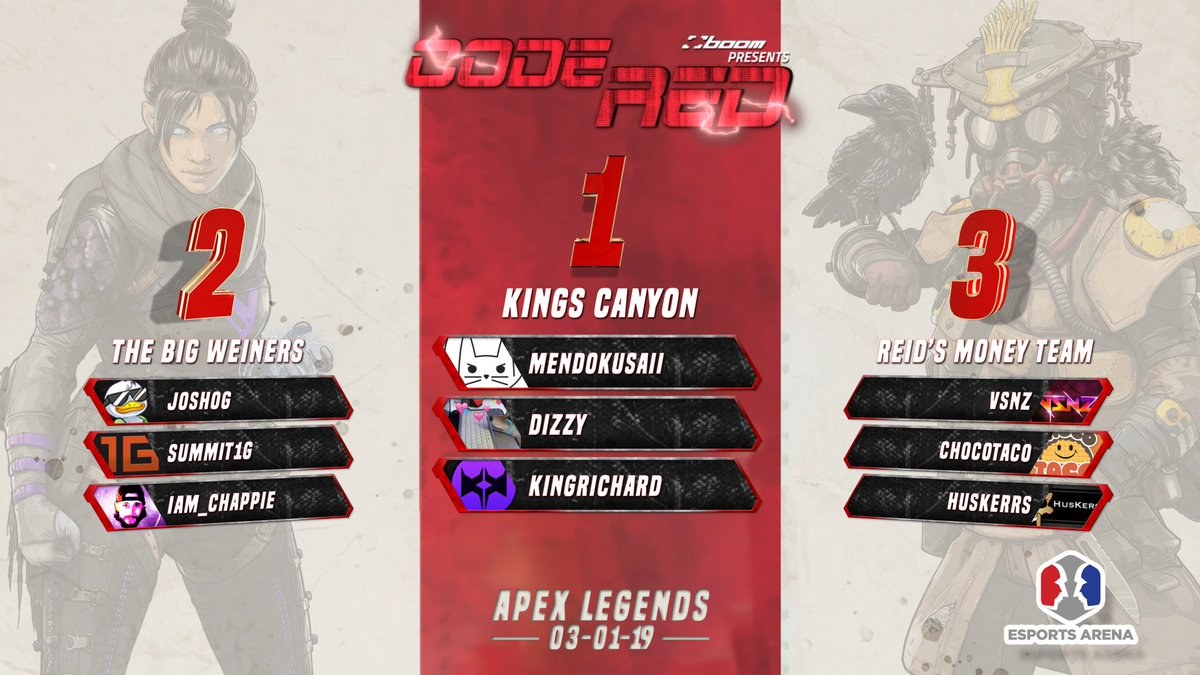 With the March 1 tournament coming to a close, here are the full final placements along with the share of the prize pool that each of the top three teams received.

The full Winner’s and Loser’s brackets, including the aggregate scores of each match, can be found below the placements table. 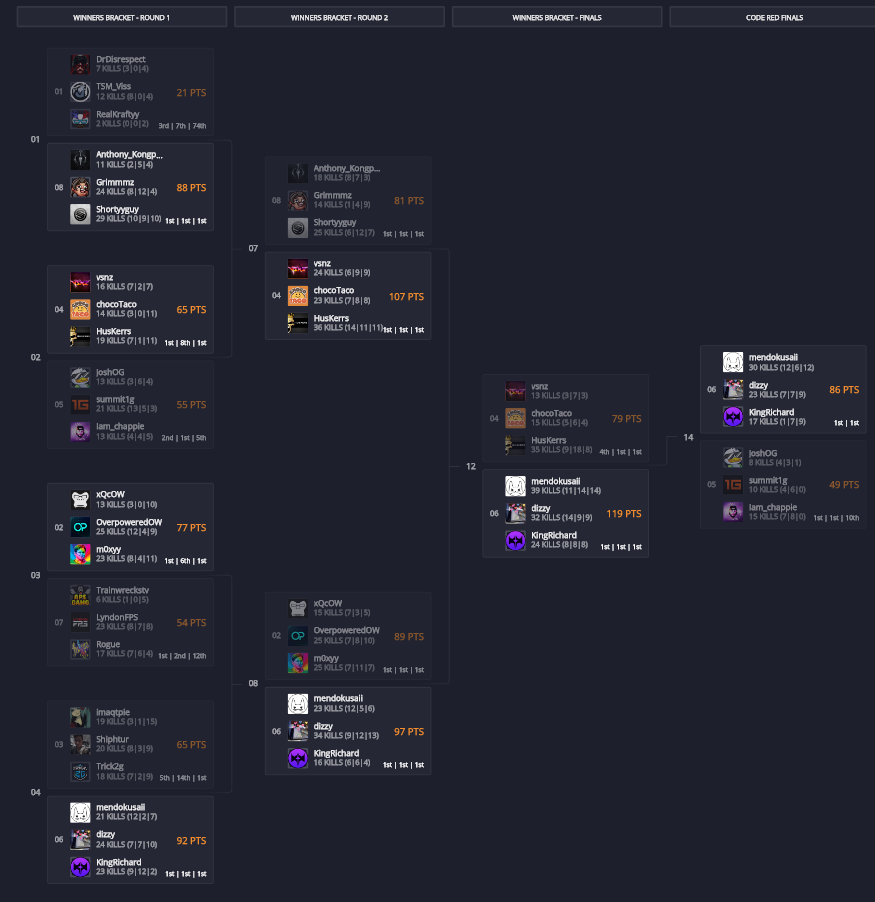 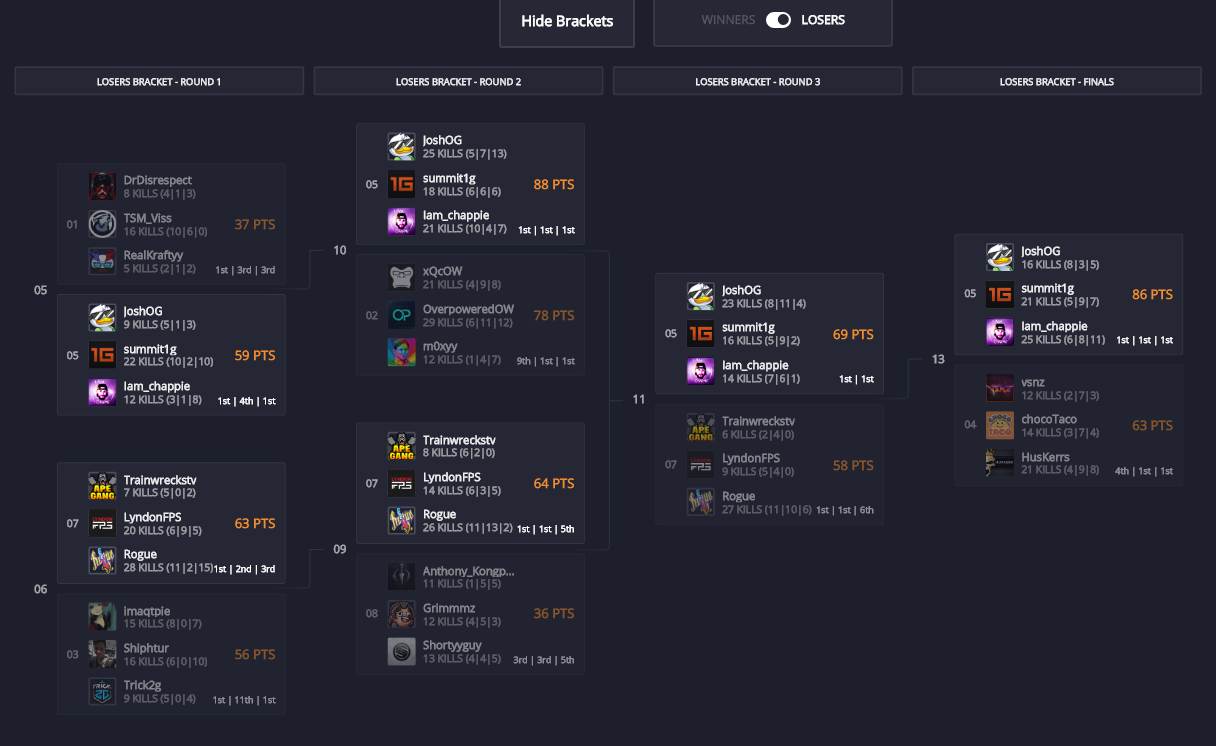 The previous running of the tournament, held on February 16, was won by the team of Ninja, dizzy, and KingRichard – full recap

Make sure to follow us on Twitter @Dexerto to keep updated with the latest Apex Legends news, updates, leaks, and more!