Apex Legends‘ meteoric rise doesn’t seem to be slowing down. It was confirmed on February 4, that 50 million players have now played the incredibly popular battle royale on PC, PlayStation 4 or Xbox One.

It was only a matter of time before the popular title would hit the coveted 50 million unique players mark. This number is for worldwide players and presumably based on all platforms.

It means that Apex Legends took just one month, or 28 days, to reach the 50 million player mark. This continues the theme of its groundbreaking growth after it took the game just eight hours to reach one million unique players, and 24 hours to reach 2.5 million.

Apex Legends hit 50 Million players worldwide! We are humbled by all your support and can’t wait to show you what’s next. pic.twitter.com/QTDH57lfvB

These incredible numbers are in spite of the game not releasing its much anticipated battle pass yet as players continue to wait for the beginning of season one.

The Apex Legends road-map stated that both will be coming in March. Therefore, Respawn Entertainment still have nearly a whole month to remain on schedule. 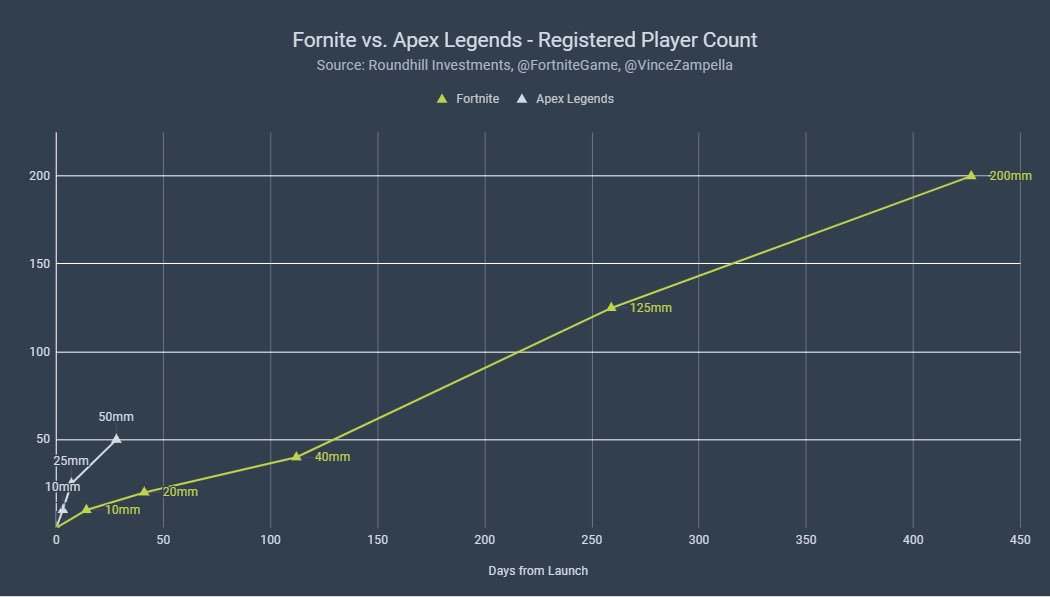 Naturally, due to its incredible rise, Apex Legends is being directly compared to Fortnite. Epic Games’ biggest release is arguably one of the most popular games of all time and many consider it the benchmark for battle royale gaming.

According to Roundhill Investments, in the image above, Fortnite took over a year to reach its 200 million player count and 16 weeks to reach 45 million players. This highlights just how fast Apex Legends has grown.

Fortnite was one of the pioneers of the battle royale scene and it is therefore, perhaps, not fair to compare the two directly. It remains to be seen whether Apex Legends can amass the same total player count but it is certainly on its way to doing so.