How to predict weather patterns on Animal Crossing: New Horizons

You can now predict your island’s weather patterns on Animal Crossing: New Horizons, all thanks to MeteoNook, a new browser-based weather app.

The app was created by Ash Wolf, also known as Ninji, a software developer in Glasgow and, for many Animal Crossing lovers, a savior for their ability to understand and work out the game’s many quirks.

Weather patterns are highly important in New Horizons for several reasons. They affect when certain bugs and fish appear or disappear. When it rains, Coelacanths, which sell for 15,000 bells, appear in the sea and snails appear on bushes, but butterflies disappear. Rain predictions can also be extremely helpful if you’re trying to grow hybrid flowers.

When the sky is clear at night, shooting stars are far more likely to appear. Occasionally, your island will also get rainbows, fog, and aurora borealis’ in the wintertime.

By entering known data points, Ninji’s app, MeteoNook, can predict the weather on your individual island down to the second.

find your island's weather seed by entering known data points and get down-to-the-second forecasts for any date, including meteor showers, rainbows, fog and aurorahttps://t.co/xHtMvwXGuB pic.twitter.com/fUbZPm22v5

How does it work?

To predict your weather pattern you need to make sure you have the seed. This is a very long number, unique to your island, which determines your weather – and there are over two billion of these numbers.

Ninji’s app works it out through trial and error, comparing the data you provide with all of the different possibilities, ruling each one out if it doesn’t make sense.

You have to begin by recording what your weather looks like each hour out of the following categories: clear, sunny, cloudy, rain clouds, rain/snow, and heavy rain/snow. Ninji suggests you do this at the beginning of the hour when it is easiest to identify. But, you have to be certain, or the prediction you’re given could be wildly off-kilter.

On days when you have a rainbow, aurora borealis, or a heavy shower, this is enough data for the whole day, so you don’t have to enter your weather by the hour.

The app works because of the ability to time travel within the game, and because the weather conditions will always be the same on a certain time and day, whether you travel back or forward in time. Celeste’s appearances are picked randomly out of the days that have meteor showers, so this cannot be predicted.

What information do you get?

Once you have worked out your seed and entered it into the app along with your hemisphere, MeteoNook will provide you with a yearly and monthly breakdown of how your weather looks.

For example, in a given month you might get 3 light showers, 1 heavy shower, and 4 rainbows. 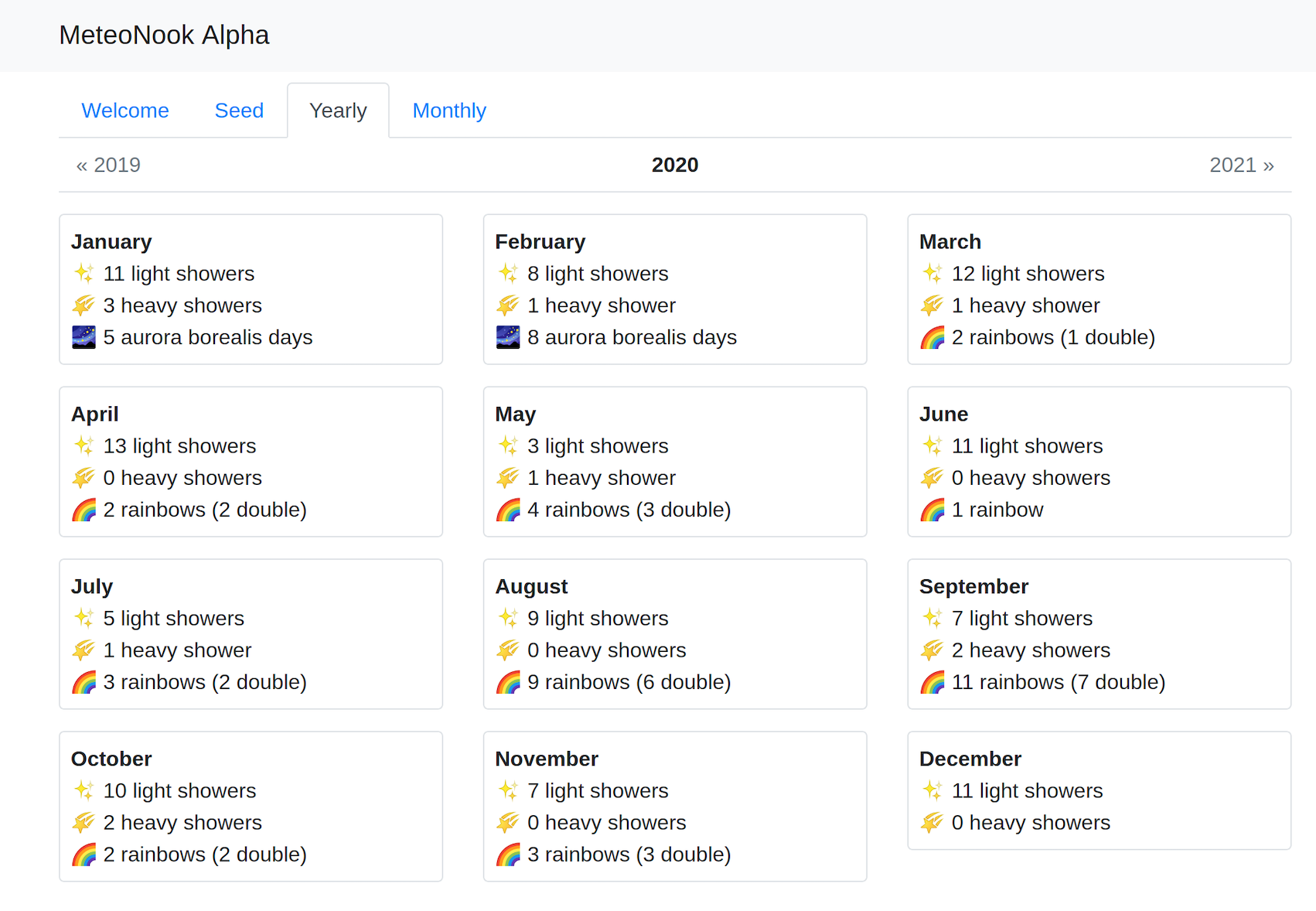 On individual days you can see exactly what your weather will look like, as long as the information you have provided is correct.

It’s easy to enter weather data into the app that simply cannot happen. Ninji have mentioned they are working on a feature that tells you when you have entered impossible information on a given day, but that’s not yet available. Until then, predict the weather as many times as you can!